Financial Warfare: What Would Russia’s Sale of US Treasury Holdings Mean for U.S.? (+2K Views)

certain corners of the internet [that Russia, in response to any economic sanctions implemented by the West, might engage in some form of retaliatory financial warfare. It is suggested that Russia might sell all of  its holdings of U.S. Treasury debt as a means of adversely affecting the financial “health” of the U.S. The fact is, however, that such a scenario is highly unlikely for the simple reason that it would have little, if any, impact. Here’s why.]

So say the guys at DQYDJ.net in edited (highly paraphrased) excerpts from their original article* as posted recently on SeekingAlpha.com under the title Can Russia Cause A Run On U.S. Debt?. 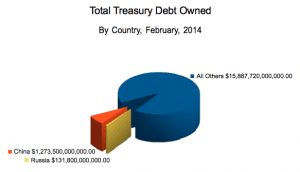 All others includes domestically held debt. (Sources above)

Below is the full foreign holdings chart, straight from the Treasury:

Also straight from the Treasury, these footnotes:

When it comes down to our debt, we’re the adult playing in the sandbox. Fannie and Freddie or other quasi-government agencies might be more exposed to manipulation than the U.S. in general, but we have the resources to put a quick halt to any manipulation.

There is little the United States can do militarily to change the outcome in Ukraine…but this does not mean the United States is helpless. No sooner had the Russian invasion become clear than the White House announced the possibility of economic sanctions against Russia….By implementing such sanctions, the United States has moved in the direction of a new kind of warfare — not kinetic war involving ships, planes and missiles — but financial war involving cash, stocks, bonds and derivatives. The policy question, and an important question for investors, is how far can this type of financial warfare go and how effective can it be? What will the impact of financial war be on markets in general and investors in particular? Read More »

Share
Previous The Stock Market Is a Risky Place to Be – Here’s Why
Next Will We See Financial Warfare Between U.S. & Russia? (+2K Views)