Emerging Markets Will Initiate Next Financial Crisis – Here’s Why

Lorimer Wilson August 20, 2015 Comments Off on Emerging Markets Will Initiate Next Financial Crisis – Here’s Why 2,204 Views

Global financial crises tend to happen in seven-year periods, and there is mounting evidence that the market is approaching another lead by the emerging markets.

The above comments, and those below, have been edited by Lorimer Wilson, editor of munKNEE.com (Your Key to Making Money!) and the FREE Market Intelligence Report newsletter (see sample here – register here) for the sake of clarity ([ ]) and brevity (…) to provide a fast and easy read. The contents of this post have been excerpted from an article* by Mercenary Trader (mercenarytrader.com) originally posted on SeekingAlpha.com under the title The Next Global Financial Crisis: Chinese Meltdown, U.S. Dollar Strength And The ‘Original Sin’ Pose Significant Risks To Emerging Markets ‏ and which can be read in its unabridged format HERE. (This paragraph must be included in any article re-posting to avoid copyright infringement.)

Looking back in history, major financial events happen every five to seven years or so, as the below image via State Street makes clear: 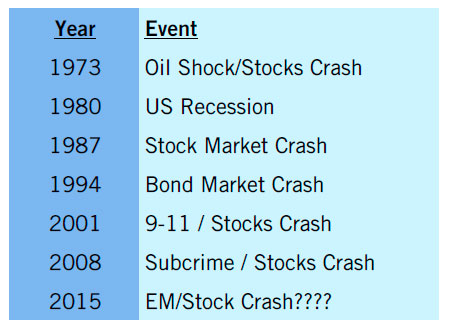 As to why this is the case, we see a logical middle ground between:

As of now, we see Austrian cycles of capital misallocation coming to bear in China, with painful implications for emerging markets.

What are the causes for thinking that, yes Virginia, EM is where this crisis is likely to kick off?…[we;;,] it’s all about exposure levels, debt build-up, and hostile monetary policy. To wit: 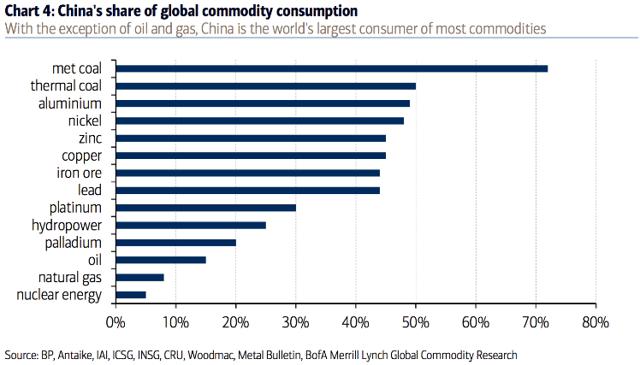 1. EM is most exposed to China-driven commodity collapse

First look to commodity prices…and consider that 1) global commodity consumption is driven by China, and 2) global commodities are largely supplied by emerging markets. The world is now adjusting to the reality that China’s endless growth may well and truly be ending. The Ponzi capex boom had to cease and desist at some point, and even China’s broad demographics are turning south.

Consider the fact that EM countries spent the past six years doing something ill-advised: racking up ever higher levels of debt (even as developed world countries cut back on debt). 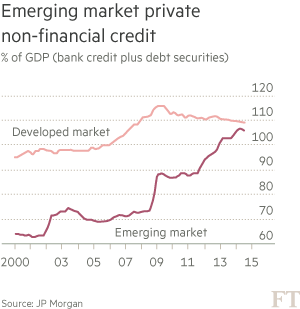 3. EM is most exposed to currency and trade war fallout

When China announced a surprise devaluation of the yuan last week (the largest in decades), the decline among various EM currencies was like a who’s who of pain. 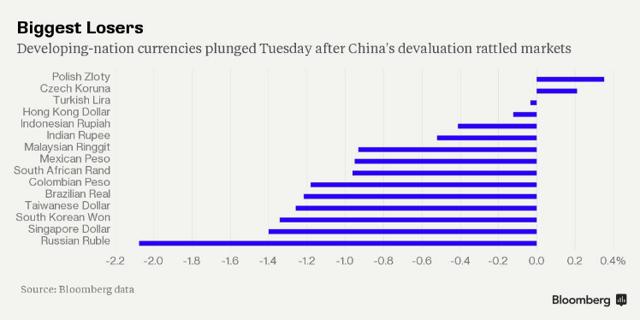 The size of the devaluation, a mere blip in the big scheme of things, was the smallish appetizer at the beginning of a large meal: an expectation that more, perhaps much more, devaluation will be coming. In fact, China may have quite, by bumbling accident, guaranteed the need to devalue further:

4. EM is most exposed to Federal Reserve tightening

…Given America’s status as the world’s largest economy, with 20-25% of global GDP or thereabouts, the monetary policy for Uncle Sam is by and large the policy for everyone. This means the beginning of a hiking cycle serves as fiscal tightening for debt-leveraged EM countries who further complicate the situation having racked up trillions in non-local, dollar-denominated debts.

5. Crashing price of oil makes EM one of the most vulnerable areas of the global economy

Last but not least, one should consider that the price of oil is crashing and could be headed for $30 a barrel, and that any “risk off” trigger elsewhere in the global asset complex – as with an abandonment of energy debt for example – could lead to follow-on rampant selling in EM as one of the most vulnerable areas of the global economy.

Putting it all together, with price, data and events all confirming the gloom (Brazil debt was just downgraded to junk as China slows day by day), and it is not hard to see just how the tightly coupled complex system that is the global market faces blowup risk via EM.

The Great Financial Crisis of 2007-9 is now transcending into the Great Financial Catastrophe which could very well involve a total reset – or more likely a collapse – of the world economy, financial system and world political system. Here’s why.

2. The Next Great Financial Crisis Is Coming In 2nd Half of 2015

About a month ago, I warned of an emerging “liquidity squeeze“, and now analysts all over the financial industry are talking about it. Could it be possible that the next great financial crisis is right around the corner?

3. The IMF & BIS Have Issued 16 Warnings Of An Impending Financial & Social Crash – Are you listening?

For several years, and in particular the last 12 months, the IMF (International Monetary Fund) and the BIS (Bank for International Settlements) have been issuing warning after warning – as outlined below – that the biggest financial and social crash in history is coming. Are you listening? The warnings are all well thought out with cogent logic and are not to be ignored!

4. A Financial Crisis Looms – The Writing Is On the Wall!

Almost every financial crisis is presented in the mainstream media as one that “nobody saw coming” yet, as the 4 charts show below, the next one is foreseeable – “the writing is already on the wall”.

5. RED ALERT! A Major Financial Collapse Is Coming By End of Year

Based on information that I have received, things that I have been told, and thousands of hours of research that have gone into the publication of more than 1,300 articles about our ongoing economic collapse, I have come to the conclusion that a major financial collapse is imminent. Therefore, I am issuing a RED ALERT for the last six months of 2015. HERE’s why.

6. Biggest Speculative Bubble Ever Will Begin To Implode This Autumn. Got Gold?

This coming autumn we are likely to experience the beginning of the end to the biggest speculative bubble in world history. All bubble assets will implode and the financial system will come under massive pressure.

7. Deepest Downturn Since the Great Depression Is Coming

This isn’t the time to listen to those leading politicians, economists and pundits who say we’re not in a bubble and we’re finally seeing a sustainable recovery. We’re not. Central banks can’t keep this bubble going forever… [Instead,] you need to prepare for another across-the-board bubble burst and the deepest downturn since the Great Depression, with deflation, not inflation, and this time, in spite of what others such as Jeff Clark might tell you, Gold will not be your defense, it will be your downfall. Here’s why.

8. The Real Story of the Horrifying Direction the World Is Headed

When the Fed eventually raises interest rates it will likely usher in an unprecedented era of financial market instability and accelerated economic decline, and consequently, heightened social unrest, geopolitical instability, and a host of other nasty events.