history. Never have there been so many extremes in so many different areas and they are all now in their final exponential growth phases that look like a spike that goes straight up yet, once a spike move has finished, it always results in a spike move down…

The original article, written by Egon von Greyerz, is presented here by munKNEE.com – “ The internet’s most unique site for financial articles! (Here’s why)” – in an edited ([ ]) and revised (…) format to provide a fast & easy read. Visit our Facebook page for all the latest – and best – financial articles!

The world assumes that this exponential growth in so many areas will continue or even accelerate further but, sadly, that is unlikely to be the case…

For people who have savings, now is the time to take defensive measures if you haven’t already…A contrarian or risk averse investor can today look at any chart of stocks, bonds or property which will all tell him that we are now at extremes. 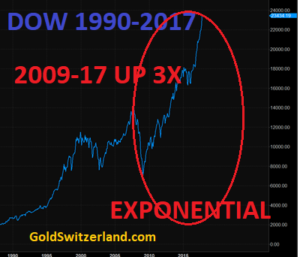 On a risk / reward basis, very few investors make money by buying in the very final stages of a move. Yes, it is true that anyone who bought into the Nasdaq in early 1999 had more than doubled his money by March 2000. The problem is that more than 95% of investors stayed in at that point and most did not get out until they had lost 50-80%.

Massive Excesses Will Be Punished

We are now at the point when the world will be punished for 35 years of excesses which is the culmination of the 100 year experiment of Fiat money started by the Fed in 1913. The $2.5 quadrillion bubble of debt and liabilities (including derivatives and unfunded liabilities) is 35x greater than global GDP and can, of course, never be repaid. The 2006-9 crisis was a serious rehearsal of what is still to come.

Governments and central banks managed to deal with the inevitable collapse for a few years by a massive stimulative package but, looking at the exponential nature of where we are now in history, it is clear that next time around the central banks will not succeed in saving the system.

Reduction In Liquidity Will Devastate the Markets

Interestingly, central banks who are always behind the curve, are now believing that they can withdraw liquidity from markets rather than needing to add. From having added $2 trillion a year, the proposed tapering will by 2019 mean that all of this added liquidity will be withdrawn and eventually turn negative. In addition, central banks are planning to increase interest rates as inflation is starting to rise. 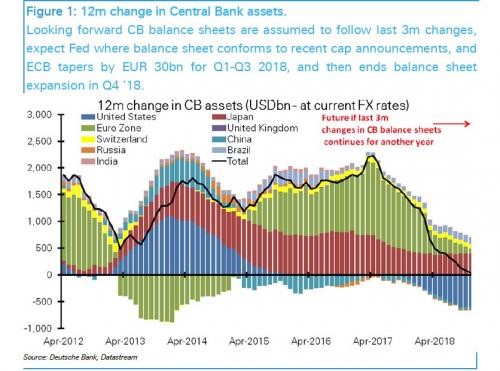 Anyone who has the slightest knowledge of markets knows that it is the trillions of dollars of credit expansion and money printing that has created the biggest asset bubbles in history and especially inflated stock markets. To stop feeding an addicted world with debt, will not only kill stock markets but also all the other bubble markets. Addicts don’t just stop feeling good when they no longer receive their daily injection. No, they start feeling absolutely awful and go into a crisis that they seldom recover from. It is the same with the world economy. It is today totally dependent on continuous injections of credit and liquidity. Taking $2 trillion of liquidity away from a liquidity needy world will make it permanently sick.

The effect will be collapsing stock, property and credit markets leading to panic in the financial system. That will lead to the biggest Volte Face ever in global monetary history in the next 6-18 months. Central banks will panic and start printing more money than ever before. First in the tens of trillions of dollars leading on to hundreds of trillions and eventually quadrillions of dollars as the derivative bubble blows up. The initial printing might have some short term beneficial effect on markets but soon the world will realise that worthless pieces of paper or zeros on a computer can never create wealth or save the world whatever the Keynesians or Krugman says.

Eventually this will lead the world to hyperinflation followed by a deflationary implosion. The course of events will not be straight forward in this process because we will have a combination of hyperinflation and deflation simultaneously. The value [of] real assets, including many commodities like precious metals, food and agricultural land, will increase in value. Money will of course hyper-inflate as it is printed in unlimited quantities whilst stocks, bonds and property will collapse in real times.

Now Is the Time to Buy Unloved & Undervalued Assets

For anyone with capital to invest, this is probably one of the most interesting opportunities in history but that presupposes that the investor is prepared to take the contrarian position. Now is the time to buy what nobody wants but which has a high intrinsic value and will benefit from the coming collapse of conventional bubble assets.

From a wealth preservation point of view, precious metals are our favourite. It has intrinsic value and the potential to grow substantially. Gold’s role as the only money that has existed and survived for almost 5,000 years makes it clear that function is likely to continue for many thousand years to come.

When buying stocks, an investor is exposed to the financial system, the survival of which is doubtful. The only way to avoid that is thorough direct registration which is difficult for most investors. Also, direct ownership of agricultural land is not practical for everyone and, if it is bought via a fund, it entails exposure to the financial system. Thus, in our view, the biggest exposure should be in physical gold and silver with a smaller allocation to the other areas above.

Don’t Be a Victim

Either you are a contrarian, or you will be a victim. The reality is that most people will be victims in coming years. Very few will realise that what we will see next is the end of an era or cycle of a major degree…[and] what we need to focus on today is to protect ourselves against these risks rather than to become victims.

Anyone who is not prepared to take a contrarian view today, risks to be a real victim in the next 5-7 years.

Share
Previous Should You Pay Your Mortgage Off Early?
Next Stock Market Investing: Start Small; Start Simple and – Above Everything Else – START