— even at current record prices — by claiming that they’re an effective hedge against the instability of fiat currencies but is that true?

The original article, written by Olivier Garret, is presented here by munKNEE.com – “ The internet’s most unique site for financial articles! (Here’s why)” – in an edited ([ ]) and revised (…) format to provide a fast & easy read. Visit our Facebook page for all the latest – and best – financial articles!

Sure, a fiat money system where central banks can and do literally print money at will has its weaknesses. That’s why hard assets like gold are so popular among smart investors: as real stores of value, they provide a safety net against currency depreciation. However, it’s doubtful that the same applies to cryptocurrencies.

Despite what the crypto-evangelists will tell you, digital tokens will never and can never replace gold as your financial hedge. Below are six reasons why.

#1: Cryptocurrencies Are More Similar to a Fiat Money System Than You Think.
The definition of “fiat money” is a currency that is legal tender but not backed by a physical commodity.

It’s clear that cryptocurrencies partially fit the definition of fiat money. They may not be legal tender yet, but they’re also not backed by any sort of physical commodity and, while total supply is artificially constrained, that constraint is just, well, artificial. You can’t compare that to the physical constraint on gold’s supply.

Some countries are also exploring the idea of introducing government-backed cryptocurrencies, which would take them one step closer toward fiat-currency status. As Russia, India, and Estonia are considering their own digital money, Dubai has already taken it one step further. In September, the kingdom announced that it has signed a deal to launch its own blockchain-based currency known as emCash, so ask yourself, how can you effectively hedge against a fiat money system with another type of fiat money?

#2: Gold Has Always Had and Will Always Have an Accessible Liquid Market.
An asset is only valuable if other people are willing to trade it in return for goods, services, or other assets.

Gold is one of the most liquid assets in existence. You can convert it into cash on the spot, and its value is not bound by national borders.

Gold is gold. Anywhere you travel in the world, you can exchange gold for whatever the local currency is. The same cannot be said about cryptocurrencies. While they’re being accepted in more and more places, broad, mainstream acceptance is still a long way off.

What makes gold so liquid is the immense size of its market. The larger the market for an asset, the more liquid it is. According to the World Gold Council, the total value of all gold ever mined is about $7.8 trillion. By comparison, the total size of the cryptocurrency market stands at about $161 billion as of this writing—and that market cap is split among 1,170 different cryptocurrencies. That’s a long shot from becoming as liquid and widely accepted as gold.

#3: The Majority of Cryptocurrencies Will Be Wiped Out.
Many Wall Street veterans compare the current rise of cryptocurrencies to the Internet in the early 1990s. Most stocks that had risen in the first wave of the Internet craze were wiped out after the burst of the dot-com bubble in 2000. The crash, in turn, gave rise to more sustainable Internet companies like Google and Amazon, which thrive to this day. The same will probably happen with cryptocurrencies. Most of them will get wiped out in the first serious correction. Only a few will become the standard, and nobody knows which ones at this point.

If major countries like the U.S. jump in and create their own digital currency, they will likely make competing “private” currencies illegal. This is no different from how privately issued banknotes are illegal (although they were legal during the Free Banking Era of 1837–1863) so, while it’s likely that cryptocurrencies will still be around years from now, the question is, which ones? There is no need for such guesswork when it comes to gold.

#4: Lack of Security Undermines Cryptocurrencies’ Effectiveness.
Security is a major drawback facing the cryptocurrency community. It seems that every other month, there is some news of a major hack involving a Bitcoin exchange.

In the past few months, the relatively new cryptocurrency Ether has been a target for hackers. The combined total amount stolen has almost reached $82 million. Bitcoin, of course, has been the largest target. Based on current prices, just one robbery that took place in 2011 resulted in the hackers taking hold of over $3.7 billion worth of bitcoin—a staggering figure. With security issues surrounding cryptocurrencies still not fully rectified, their capability as an effective hedge is compromised.

When was the last time you heard of a gold depository being robbed? Not to mention the fact that most depositories have full insurance coverage.

Since the beginning of the year, the value of Bitcoin has more than quadrupled—a tremendous spike in value that has sent investors rushing to invest in cryptocurrencies but could this be nothing more than a market bubble?

One of the world’s most successful hedge fund managers, Ray Dalio of Bridgewater Associates, certainly seems to think so. In September 2017, he told CNBC, “It’s not an effective storehold of wealth because it has volatility to it, unlike gold. Bitcoin is a highly speculative market. Bitcoin is a bubble.”

The spike in Bitcoin prices seems to only lend credence to this view. With such an extreme degree of volatility, cryptocurrencies’ value as a hedge is questionable. Most people buy them for the sole reason of selling them later at higher prices. This is pure speculation, not hedging.

#6: Cryptocurrencies Do Not Have Gold’s History as a Store of Value.

Cryptocurrencies have been around for less than a decade, whereas gold has been used as a store of value for thousands of years. Because of this long history, we know for a fact that stocks and bonds have low or negative correlations with gold, particularly during periods of economic recession. This makes gold a powerful hedge.

What little data we have on cryptocurrencies does not show the same. Consider this year alone: while the U.S. stock market continues to run record highs, the same goes for Bitcoin.

It’s true that gold has also gone up, but the correlation has been very low and, during times of recessions, tends to swing to the negative side, as you can see in the graph below. 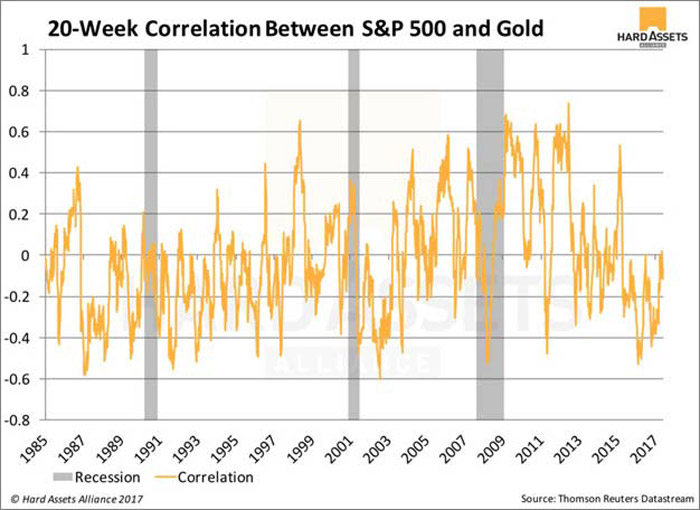 The gold vs bitcoin debate has a long way to run but if the outcome is a world in which money is what the market — rather than the government — says it is, then hopefully there will be room for both.

Bitcoin has entered a parabolic phase, blowing past the price of gold and hitting new all-time highs on a daily basis, and Trace Mayer, a leading expert on bitcoin, believes bitcoin could reach as high as $10,000 in a few years. Below is his rationale.

2. 5 Reasons to Become Bullish On Bitcoin

There are many reasons to believe that a robust foundation is being built for this technology. This infographic provides 5 reasons to be bullish on Bitcoin.

3. Bitcoin & E-money: How Each Works; How They Differ

While both Bitcoin and E-money harness the power of the web and mobile, they are still very different. See the infographic below for more information.

4. How Bitcoin Works & What Purpose It Serves

While many people may be aware of the Bitcoin revolution as it took hold of the Internet a few years ago…most are still not aware of how it works and what purpose it serves online. The infographic below presents a comprehensive analysis of said cryptocurrency.

5. Bitcoins: How to Start Using Them & the Security Issues In Doing So

How safe is the cash in your wallet? Just as with hard currencies such as dollars and pounds, the safety of your bitcoins depends on your own vigilance. If you are thinking about using Bitcoin, or already are, this infographic outlines the security concerns and how to go about alleviating them.

6. Bitcoin Can – and Will – Disrupt the Financial System‏ – Here’s How

Bitcoin has the very real potential to disrupt the existing financial system. Take a look at today’s infographic to find out how.

7. Bitcoin: the Ins and Outs Of Everyday Use & What the Future Holds

Bitcoin is a decentralized, global, peer-to-peer, digital, online currency but, that said, most are unsure whether or not it is the future of currency and unaware of the potentially massive impacts this crypto-currency holds. The infographic below shows you the ins and outs of everyday Bitcoin use as a way to save money and provide more autonomy in your financial transactions.

8. 50 Bitcoin Facts On Its History, Versatility, Usage, Acceptance & Much More

This infographic neatly covers many interesting bitcoin facts in a digestible form. It not only shows the versatility of the bitcoin market, but it also captures the difference of opinion on crypto-currencies: many embrace the technology, but some institutions show signs of hostility.

9. Bitcoin Is Not the Future of Money – It’s Just Wild Speculation! Here’s Why

All the hype surrounding Bitcoin is a dead giveaway that you should be suspicious. Forget all the economic arguments against the currency, though. The biggest risk is a technological one. Add in the neck-snapping volatility, and you’re telling me this is the future of money? Keep dreaming! It’s little more than a wild speculation. One with a fatal flaw, at that, so please, whatever you do, refrain from converting your life savings – or any meaningful amount of money – into Bitcoins. At least until you read this article.

Bitcoin bashers and angry gold bugs have missed the bus and are missing the point. While Bitcoin may be attracting some of the investment dollars that would otherwise be flowing into gold, the two are actually quite complimentary and can co-exist nicely. This article explains why that is the case.

Ever since the Federal Reserve embarked on its easy money campaign, everyone and their mother has been on a crusade for an alternative reserve currency. [The euro and China’s yuan have been talked about – and dismissed – as realistic contenders and]…during the world’s desperate search, the Federal Reserve has just continued printing more money. That has only intensified the desire for an alternative. Enter Bitcoin. Ultimately, however, it is all about greed – not a genuine interest in a fundamentally stronger alternative to the status quo – that’s driving Bitcoin prices so forget Bitcoin being a contender as an alternative currency. At best, it’s a speculative investment, and a very speculative one at that.

12. Ethereum Cryptocurrency Up 10,000% In 16 Months! These 3 Charts Depict the Financial Miracles of Our Crazy Times

13. Digix: This New Crypto-currency Is Backed By Gold!

Gold investors have been slow and cautious to adopt crypto-currencies such as bitcoin seeing them as false competition to real money such as gold and silver. The major argument from gold bugs has been that bitcoin is not backed by anything tangible [but] that has all changed with the recent introduction of Digix – the gold standard in peer-to-peer digital assets because it is literally backed by gold.

14. Digital Currencies: Investors/Traders Are Being Grossly Deceived! It’s Time To Get REAL!

My sense is that most investors and traders today are grossly deceived about the nature of reality. REALITY will prevail eventually! Isn’t it time to get REAL? I am.

Share
Previous 7 Financial Factors To Consider If You Will Be Retiring Within a Year
Next The “Dark Years” Are Coming! Preserve Your Wealth NOW – Here’s How (2K Views)