The “year that was” brought mostly disappointment to precious metals bulls. Silver

prices fell for the third straight year…[but] when we finally see a major rotation out of stocks and into precious metals, silver has the potential to lead on the way up just as it has led on the way down. [Let me explain why.]

While silver prices fell in 2014 for the 3rd straight year it is rare for any metal to fall in price 4 years in a row [and while] gold has flat-lined around the $1,200 per troy ounce level...the down-trending prices we’ve experienced improve the fundamentals for physical precious metals in 4 important ways:

PMs Have Compelling Value vs Alternatives

Dow:Gold Ratio Could Revert Back In Gold’s Favor

The ratio of the Dow Jones Industrials to the price of gold now stands at more than 14 to 1. For perspective, the ratio got as low as in 6:1 in 2011 and 1:1 at the 1980 top in gold. The ratio has plenty of room to revert back in gold’s favor as gold looks cheap versus the Dow. 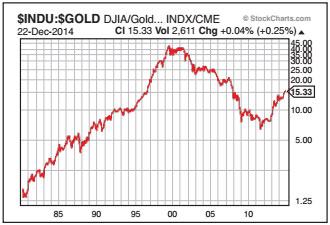 The gold:silver ratio moved in favor of gold to a multi-year high of 74:1 in 2014, as gold’s more volatile cousin got hammered yet silver mining supply exists at a ratio of about 12:1, suggesting silver has plenty of fundamental room to narrow the ratio and outperform gold and perhaps vastly outperform stocks.

When we finally see a major rotation out of stocks and into precious metals, silver has the potential to lead on the way up just as it has led on the way down.

[The above article is presented by  Lorimer Wilson, editor of  www.munKNEE.com and the FREE Market Intelligence Report newsletter (sample here) and may have been edited ([ ]), abridged (…) and/or reformatted (some sub-titles and bold/italics emphases) for the sake of clarity and brevity to ensure a fast and easy read. The author’s views and conclusions are unaltered and no personal comments have been included to maintain the integrity of the original article. This paragraph must be included in any article re-posting to avoid copyright infringement.]

Given the fact that a) the historical movement of silver is 90 – 98% correlated withgold-silver gold, b) silver is currently greatly undervalued relative to its average long-term historical relationship with gold and c) many analysts predict a parabolic rise in the price of gold over the next 5 years it is realistic to expect that silver will also escalate dramatically in price – but by how much? This article applies the historical silver to gold ratios to come up with a range of prices based on specific price levels for gold being reached. END_OF_DOCUMENT_TOKEN_TO_BE_REPLACED

Over the years only 42 pundits have been bold enough to provide a specific date as to when their forecast for the future price of gold (and silver, in some cases) would be realized. This article provides that information along with the criteria & rationale for their determinations. END_OF_DOCUMENT_TOKEN_TO_BE_REPLACED

Over the years only 14 pundits have been bold enough to provide a specific date as to when their forecast for the future price of silver would be realized. This article provides that information along with the criteria & rationale for their determinations. END_OF_DOCUMENT_TOKEN_TO_BE_REPLACED

4. Silver Will See Much Greater % Price Appreciation Than Gold – Here’s Why

The price of silver is going to go much, much higher – much higher – over the next decade relative to gold. Below are 5 solid reasons why I believe that is the case. END_OF_DOCUMENT_TOKEN_TO_BE_REPLACED

5. Silver Is A Better Choice Than Gold! Here’s Why

We are at the beginning of a major shift out of paper assets into real assets and the more I studied the merits of owning gold and silver the more I realized that silver was the smart decision. Let me explain. END_OF_DOCUMENT_TOKEN_TO_BE_REPLACED

I expect that silver will rally well over $100 in the next few years because most, if not all of the “favorable”, and few or none of the “unfavorable” items listed in this article, will occur. END_OF_DOCUMENT_TOKEN_TO_BE_REPLACED

Silver currently looks inexpensive compared to crude oil, the S&P 500 and the size and rate of increase of the national debt suggesting silver is ready to rally. END_OF_DOCUMENT_TOKEN_TO_BE_REPLACED

Share
Previous My Financial Forecast For 2015 – Gird Your Loins & Fasten Your Seat Belts!
Next Are These Views Of the Economy Fear Mongering OR Insightful? You Be the Judge (+2K Views)

Top 10 Gold Producing Countries: Where Do China, the U.S. and Canada Rank?