Lorimer Wilson August 18, 2013 Comments Off on Collapse of Risk Ratio Is Worrisome – Here’s What It Means & What Action You Should Take 1,762 Views

The collapse in the STA Risk Ratio, which tracks the most common measures of

market sentiment, is a clear signal that something has changed in the market and that risk of a broader correction has risen sharply.  While this is only one measure of “risk” it does suggest that investors should pay closer attention to their portfolios than normal and implement some risk management practices.

Roberts goes on to say in further edited, and in some places perhaps paraphrased, excerpts:

I discussed recently in “10 Investment Rules To Live By” that:

“The best investments are generally made when going against the herd.  Selling to the ‘greedy’ and buying from the ‘fearful’ are extremely difficult things to do without a very strong investment discipline, management protocol and intestinal fortitude.  For most investors the reality is that they are inundated by “media chatter” which keeps them from making logical and intelligent investment decisions regarding their money which, unfortunately, leads to bad outcomes.”

In order to determine the direction of the “herd” we should analyze what the herd is doing currently.  This is why price trends, deviations, momentum and sentiment measures are more important as they provide feed back of the “psychology” driving the markets.  In last week’s missive I discussed in particular the STA Risk Ratio which is a composite of some of the most widely followed measures of momentum, volatility and sentiment.  I stated:

“The next chart is the most important. It is the composite risk ratio indicator which combines market momentum with common investor sentiment and fear gauges. The red line is the 8-week moving average of the risk ratio. 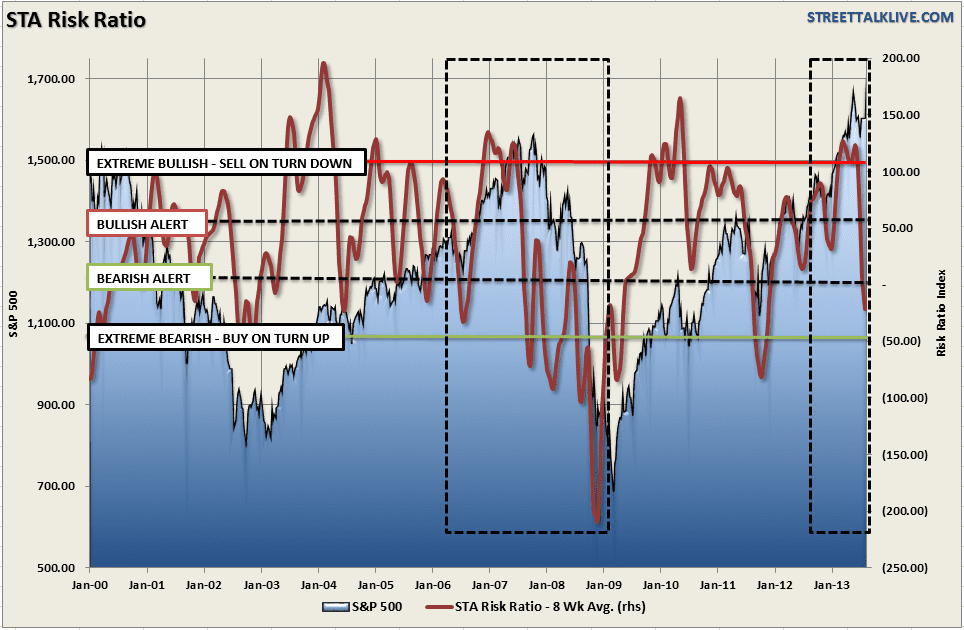 What is crucially important to notice is the recent sharp decline in the risk ratio from the advancing peak in the market.   This was the same decline as what was seen in 2007 as the market advanced against deteriorating internals.”

As stated the collapse in the risk ratio is a clear signal that something has changed in the market and that risk of a broader correction has risen sharply.  While this is only one measure of “risk” it does suggest that investors should pay closer attention to their portfolios than normal and implement some risk management practices such as we suggested this past weekend:

There are many ways to approach portfolio management but the basic premise is that if you “don’t sell high” you don’t have any capital with which to “buy low.”  This is the most basic function of investment – yet it is the one thing that individuals fail to do. This is also one of the main reasons that investors so often get caught up in major market meltdowns.

When markets fail to immediately adhere to the fundamental arguments about valuations and economics they become dismissed as “wrong” or that “this time is different.”  The reality is that these measures have little, if anything, to do with shorter term market movements.  This is why Keynes once stated that: “The markets can remain irrational longer than you can remain solvent.”

In the short term markets can be, and do seem, to be irrational and being on the wrong side of the current short term trend can be disappointing or even devastating.  Currently, the artificial inflations have detached the market from the underlying economic and financial fundamentals.  As such, as an investment manager, I must remain invested in the markets or suffer career risk; but in the current environment it would be naive to neglect the rising risks of the technical extensions, deviations from underlying fundamentals and weakening momentum.

However, in the long term, it is inherently important to remember that fundamentals do eventually play a crucial role which only in hindsight will become readily apparent.  Despite the ongoing central bank interventions the current market cycle will end.  The ongoing distortion between the market and the fundamentals will eventually revert which has, historically speaking, led to larger than expected reversions and outright crashes.

Unfortunately, despite the historical record, investors continue to believe that the current cycle will continue indefinitely.  Simply put – it won’t…

Too often investors focus on the negative, lose confidence in stocks and, as a result, they can miss great bull markets. I believe when it comes to finding investment opportunities it’s all about both monetary and fiscal policy. As such, I encouraged investors to follow the money. With that in mind, here are two of my favorite charts that I believe demonstrate how investors can do exactly that. Read More »

2. Stock Market & Economy Could Be in BIG Trouble By End of October – Here’s Why

I generally shy away from making time-specific economic and stock marketstockcrashimages-1 predictions simply because odds are very low you’ll be correct on both the prediction and the timing. However, there are certain times when the environment is conducive for a prediction that comes along with an expiration date. Today is one of those times. Read More »

With the stock market up over 20% since we forecast in July, 2012 that we would see the Dow at 20,000…[by the end of the] decade, our forecast seems less ambitious than back then. US stocks are not overpriced or overleveraged, and remain more attractive than at prior peaks. As such, based on current conditions, we now project that…the Dow will reach 20,000 by late 2018. Read More »

According to some pundits, the market is dangerously close to a repeat performance of 1987. Today, I’m going to show you why they’re wrong. Read More »

5. Don’t Worry About the Threat of Higher Interest Rates Hurting Stocks – Here’s Why

History clearly shows that stocks don’t fall during periods of rising interest rates. Sure, they might fall a little when a rate hike is announced – maybe for a week or so – but they usually bounce back quickly – and then they go higher. Read More »

6. We Think the Prognosis for Stocks Looks Good – Here’s Why

Stocks have generally performed very well in rising-rate environments but the current rate cycle is unlike any other of the past 40 years, keeping investors on edge. A lot will depend on how inflation behaves. Read More »

7. Current Stock Market High Is NOT a Bearish Signal – Here’s Why

The Dow has begun a major rally 13 times over the past 112 years which equates to an average of one rally every 8.6 years so, as it stands right now, the current Dow rally that began in March 2009 would be classified as well below average in both duration and magnitude. Read More »

8. Bernanke Has Created the Mother of ALL Stock Market Bubbles – Here’s Why

Are stocks in a bubble? While leverage has returned to the stock market driving up stock prices and aggregate demand in the process, margin debt is still shy of its all-time high as a percentage of GDP, so there is certainly some headroom for further rises. A look at the following 5 charts illustrate that contention quite clearly. Read More »

10. 30 Analyses of Why Stock Markets Are Tanking – Finally

Stocks: Take Profits NOW To Protect Your ASSets From TOTAL Annihilation – Here’s Why 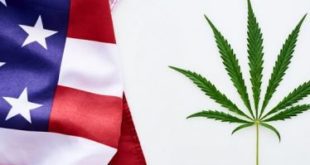 Physical Gold vs. Gold Stocks: Which Perform Best In A Recession? (+23K Views)