Both Stocks and Bonds are Expensive! Here's Why

Lorimer Wilson October 6, 2011 Comments Off on Both Stocks and Bonds are Expensive! Here's Why 2,594 Views

[We have determined that] the current cyclically adjusted real yield of 5.28% is telling us that the stock market is

So says the Turnkey Analyst (www.TurnkeyAnalyst.com) in an article* on SeekingAlpha.com which Lorimer Wilson, editor of www.munKNEE.com (Your Key to Making Money!), has further edited ([ ]), abridged (…) and reformatted below for the sake of clarity and brevity to ensure a fast and easy read. The author’s views and conclusions are unaltered and no personal comments have been included to maintain the integrity of the original article. Please note that this paragraph must be included in any article re-posting to avoid copyright infringement.

Determing the Real Return of Equities

One of Robert J. Shiller’s…tools for thinking about equity values is the market’s cyclically adjusted P/E [CAPE] ratio…[Below is a] calculation of Shiller’s famous ratio [and how it is] assisting us in assessing current market conditions.

[The CAPE ratio is calculated in 6 steps as follows:]

1. The first step in calculating the [CAPE] is to determine the nominator, which is the real price of equity markets.

We can then use this methodology to calculate a real S&P close for every month going back to 1/31/1871.

2. The next step in calculating the [CAPE] is to determine the denominator.

First, we look at nominal earnings figures for the S&P. While the numbers have not been finalized, S&P currently estimates that on 9/30/11 the index’s trailing twelve months earnings per share for the overall S&P index were $88. That is to say, if you owned today’s index at $1,131, the earnings associated with that equity ownership interest would equate to $88, for a twelve month trailing nominal P/E of 12.9x earnings. You can go back in time and, for any given month in the history of the S&P, determine the trailing twelve months earnings figure for the overall index.

3. Now we adjust these figures for inflation, using the same methodology discussed above. So for example, for 9/30/11, we see the real earning for the S&P are:

We can look at a stream of such monthly figures, each representing the 12-month trailing average real earnings for the S&P. Below is a graph showing this calculation for each month over the past 10 years:

Note that the average is $58. This is the “cyclical adjustment” in the calculation, which normalizes the gyrations in earnings figures apparent in the graph above. It is saying that, on average, the market has had real earnings of $58 per year in each of the past ten years.

4. Now we can see that the cyclically adjusted real P/E [CA(R)PE] for the market is about 19:

How we apply  Shiller’s CAPE Ratio

We hate to admit it, but bond folks are typically smarter than their equity counterparts. We may never reach their IQ level, but we can always borrow their ideas.

Here at Turnkey Analyst we prefer to look at earnings yield, or the reciprocal of the P/E, because it allows a more direct comparison with yields in other asset classes (real estate, fixed income, CDs, etc.). Looking at yields is also a more intuitive way of thinking about what you get when you purchase an asset. For example, I buy a popsicle stand at a 12% yield; I get 12$ for every $100 I invest. Whereas, “I buy a popsicle stand for a P/E of 8.33x” is less intuitive. Especially when I have to compare the popsicle stand to the treasury bonds paying a 5% yield.

How we create a predicted 10-year return figure

5. Now we want to see in what way the first variable is predictive of the second variable, so we run a regression on these two variables, using input from every year data is available (from 1/31/1881 through 9/30/2001), and solve for an intercept, A, and a slope, B, in the regression equation (Y) = A + BX. Below is the output for the regression: 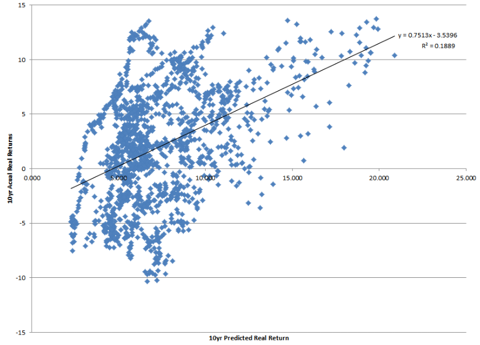 The regression returns an intercept value of A=-3.54, and a slope coefficient of B=0.75. This means that for every 1.0 percentage point move in cyclically adjusted real yield, we see, on average, a 75bp move in predicted real S&P returns over the subsequent 10-year period. 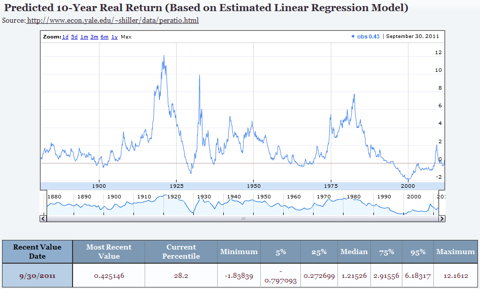 Reviewing the data above…we can see the Most Recent Value of 0.425146. This predicted return falls in the 28.2%ile of the predicted universe. You can also see minimum, median, and maximum predicted values, as well as several %ile breakpoints, for comparative purposes.

Investing is all about opportunity costs…One of the metrics we like to look at is the inflation-adjusted spread between the 10-year earnings yield of the stock market compared to the 10-year Treasury Bond yield. 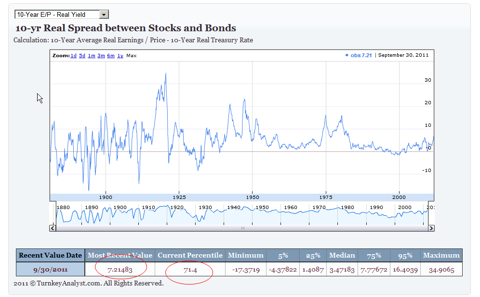 We have identified that predicted real stock returns are projected to be 43bp a year for the next 10 years according to a very simple linear regression model. [As such,] stocks seem expensive. We’ve also identified that relative to bonds, the real spread between stocks and bonds is 7.2% in terms of yields, i.e., stocks relative to bonds seem cheap.

If stocks are expensive, and stocks relative to bonds seem cheap, this implies that bonds are also expensive. Everything is expensive!

[As such, as we see it] the Fed is accomplishing its desired mission: keep interest rates low and force people into overpriced risky assets.

The Cyclically Adjusted Price Earnings Ratio, abbreviated as CAPE, or the more precise P/E10, closely tracks the real (inflation-adjusted) price of the S&P Composite. After dropping to 13.3 in March 2009, the P/E10 has rebounded to 23.0. The historical average is 16.39 raising concerns about the current price level of the S&P Composite. Let me explain. Words: 1298

The S&P 500 is considerably overvalued – somewhere in the range of 34% to 61% – depending on which of 4 market valuation indicators are used and whether the valuation is based on the arithmetric or geometric mean of each. While these findings are not useful as short-term signals of market direction…they play a role in framing longer-term expectations of investment returns and suggest a cautious outlook and guarded expectations. [Here are the details.] Words: 676

Share
Previous Why Have Gold & Silver Been Selling Off? Here's the Simple Answer
Next Platinum:Gold Ratio Suggests Platinum Will Do Even Better Than Gold in the Future