Platinum:Gold Ratio Suggests Platinum Will Do Even Better Than Gold in the Future

Lorimer Wilson October 7, 2011 Comments Off on Platinum:Gold Ratio Suggests Platinum Will Do Even Better Than Gold in the Future 2,383 Views

precious metals out there that investors should be considering for their portfolios.  While gold and silver should form the core of any metals portfolio, there’s at least one other metal that merits serious attention and that is platinum. [Let me explain why.] Words: 493

So says Chris Horlacher (www.mapleleafmetals.ca), in an article* which Lorimer Wilson, editor of www.munKNEE.com (Your Key to Making Money!), has further edited ([ ]), abridged (…) and reformatted below for the sake of clarity and brevity to ensure a fast and easy read. The author’s views and conclusions are unaltered and no personal comments have been included to maintain the integrity of the original article. Please note that this paragraph must be included in any article re-posting to avoid copyright infringement.

Horlacher goes on to say:

You may have caught the odd story in the news where they reported a string of robberies where the thieves sawed off a car’s catalytic converter.  The reason for such interest in such an innocuous piece of emissions reduction equipment is because these devices are packed with platinum.  You see, one of platinum’s primary uses in industry is as a catalyst for certain chemical reactions.  Without platinum, a catalytic converter would not be able to transmute certain noxious gases coming from your engine into more mundane substances with little environmental effects.  Any thief with a hacksaw and a couple [of] uninterrupted minutes can reap as much as $400 in profit.

As the following chart shows, platinum’s rise has paralleled nicely with [that of] gold’s:

Similar to silver, platinum is an industrial metal, with about 50% of each year’s production going to the automotive sector.  As a result, the metal’s volatility is more in line with silver than gold as well.  This is apparent considering platinum’s much more violent drop in late 2008 vs gold’s.  This was preceded by a massive spike from $1,400/oz to $2,200/oz in the same year though.  It has since resumed its upwards trajectory.  While gold is making all-time highs, platinum is likely to retrace its steps back up to $2,200/oz and that means some serious profits for investors as platinum currently rests at about $1,600/oz.

Just as we examine the gold/silver ratio when determining whether to buy gold or silver, we can also look at the platinum/gold ratio to determine whether to buy platinum or gold.  Platinum has seldom been this cheap compared to gold:

[As shown below, the platinum to gold ratio has completely broken down in recent days. In fact, at 0.90, it’s the lowest ratio seen since at least 1986.] 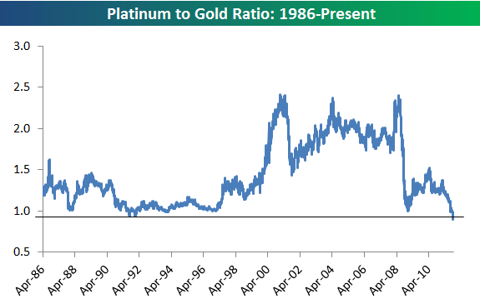 Based on current market conditions, this is an ideal time for investors to start adding platinum to their portfolios.  As the gold price continues to rise in the years ahead, the potential gains in platinum are likely to be even more spectacular.

Investors looking to purchase platinum can…visit the platinum section of our website.

Share
Previous Both Stocks and Bonds are Expensive! Here's Why
Next Want to Invest In Silver? Here are 25 Ways to Do Just That (+3K Views)