Why Have Gold & Silver Been Selling Off? Here's the Simple Answer

Lorimer Wilson October 5, 2011 Comments Off on Why Have Gold & Silver Been Selling Off? Here's the Simple Answer 2,392 Views

Why have gold and silver have been selling off? The answer is very simple. There is a strong correlation between a

strong dollar and weak commodities. The U.S. dollar is no different than anything on earth – it will always follow the path of least resistance. As the dollar grows stronger commodities sell off or become cheaper [- and gold could go down as low as $1,500/ozt. and silver down to perhaps as low as $21/ozt. before this is all over. Let me explain further.] Words: 650

So says George Maniere (www.investingadvicebygeorge.blogspot.com) in edited excerpts from an article* which Lorimer Wilson, editor of www.munKNEE.com (Your Key to Making Money!), has further edited ([ ]), abridged (…) and reformatted below for the sake of clarity and brevity to ensure a fast and easy read. The author’s views and conclusions are unaltered and no personal comments have been included to maintain the integrity of the original article. Please note that this paragraph must be included in any article re-posting to avoid copyright infringement.

Maniere goes on to say, in part:

Take a look at the chart of the dollar below. 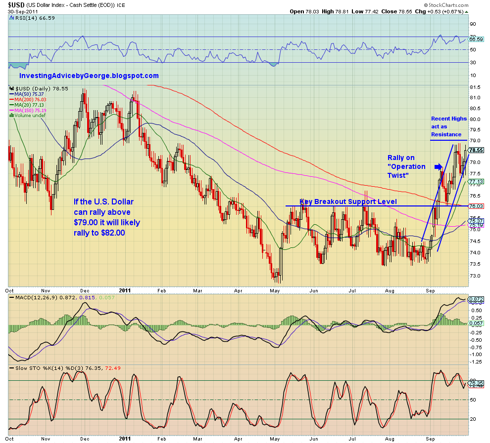 In late August – early September the FOMC initiated “Operation Twist” – a plan that [will take] the money that is maturing from the short-term bonds the FOMC had bought during QE2 and rolling it into longer 20 and 30 year treasuries that carry a higher yield. This [has] caused the dollar to grow stronger because the yields on longer treasuries are higher.

With any investment the old saying is “no risk – no reward.” However with treasuries that have a strong yield there is not the same risk as there is with equities or commodities. The price of equities and commodities fluctuate but with treasuries you are assured that there will be no fluctuation in price and the yield will remain the same. Why would you buy an equity that would yield the same as a treasury and have the risk that the yield could be lowered or the price of the equity go down if the company had a bad year? With treasuries you are buying surety and comfort.
I would like to take a look at two commodities and show how the stronger dollar has impacted their price. 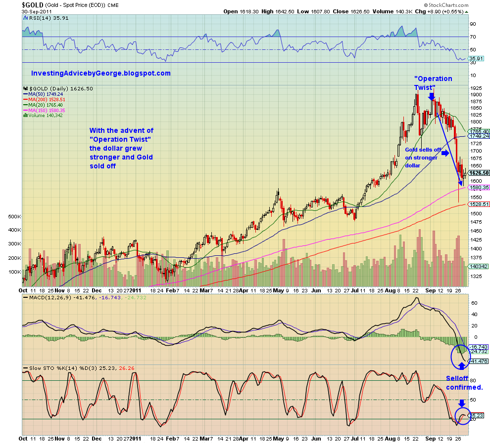 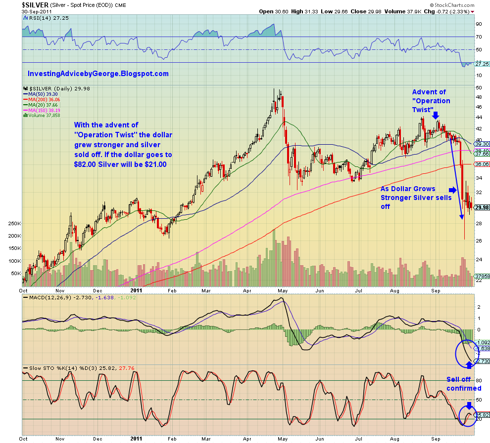 …I do not believe gold will go much lower than $1,500.00 an ounce. Silver, however, despite being a hedge against the weak dollar, also has industrial uses. If the economy continues to weaken silver could fall as far a $21.00 an ounce. I am certainly not saying that you would be able to buy silver for $21.00 an ounce. There would be margin hikes from the sellers and [I am of the impression that many distributors would… sit on their stock until the price of silver goes back up…
I believe that silver will one day be worth more than gold. I believe that silver is incredibly undervalued. While this sounds like an outrageous claim, silver is actually rarer than gold. This is because silver has industrial applications and every day our technologies will require more and more silver to operate. Silver that is above the ground has been diminished by 91% since 1980, while the stockpile of gold has grown 600%…- and gold could go down as low as $1,500/ozt. and silver down to perhaps as low as $21/ozt. before this is all over. This may be the last chance we will ever get to buy silver at these prices.
*http://investingadvicebygeorge.blogspot.com/2011/10/strong-dollar-equals-weak-equities-and.html
Related Articles:
1.  What’s Going On With Gold??

2.  Marc Faber: Gold Could Fall to $1,100 “We overshot on the upside when [gold] went over $1,900.We’re now close to bottoming at $1,500, and if that doesn’t hold it could bottom to between $1,100-$1,200.”
3.  Chris Vermeulen: Gold to Rebound to $1,775 by Year-end  A few weeks ago (August 31st) I wroteabout how gold was starting to top and that everyone should expect a very sharp drop to the low $1600 area… [and] only three days later gold topped and it has not stopped falling since. At that time [however]…gold was still building the top pattern so I could not say how long a recovering would likely take nor did I know exactly when to re-enter a long position but now that we have seen how gold arrived at my target price I can form a new forecast. Words: 1078
4.  Goldrunner: The Gold Tsunami Wave Cycle The Gold (and Silver) bull continues to closely follow the giant wave formation of a tsunami.  The recent more parabolic rise in Gold up to above $1,900 is analogous to the little ridge of water we first saw way out in the distance, and now, much like when the waters recede from the shore early in the tsunami wave formation, Gold is undergoing a correction. Words: 1557
5.  Gold to Bounce Back to $2,250 – $3,000; Silver to $52 – $62; HUI to mid-900s by Year End

Goldrunner: a Gold & Silver Tsunami is Approaching – Fast! A tsunami doesn’t start with a bang, but with a whimper.  The first sign is a little hump in the water way out in the distance that is barely notable.  Anyone who catches a glimpse of it simply continues to expect the day to be the same as the last many days – calm and beautiful waters along the shore.  This is the point where we are, today in the Precious Metals sector. Many have seen the little roll of water out in the distance as Gold edged up in the first move of a more parabolic slope, yet most investors are mired in the same expectations of yesterday – a return for Gold to correct down into a lower base. Our analysis based on the fractal relationship to 1979  shows, however, that the mid 900s are a realistic target for the HUI by the end of the year or early in 2012; that $52 to $56 should be achievable for silver, with $58 to $62 as real possibilities; and that Gold should go the $2250 level followed by $2500 with the potential for $3,000, or a bit higher, now on the radar screen. Let me explain why that is the case. Words: 2130

A review of the gold price written by Robin Bew, chief economist at HSBC Bank, proposes that the gold price isin danger of entering bubble territory and predicts a sharp correction by year-end to $1,000 per troy ounce by 2013. [Let’s examine Bew’s views more closely.] Words: 725

When you just consider the downgrade of U.S. debt, the jobs problem, the housing situation, the European bankconcerns and their debt crisis, the negative outlook for the global economy, not to mention that the Fed will likely seek new measures to help the economy, we just don’t see gold coming down any time soon, other than having a normal downward correction [as currently is the case. Let us show you why.] Words:  1102

9.  Why Does Gold Fall When Financial Crises Worsens?

Why is gold  falling as the financial crisis worsens? After all, isn’t gold some sort of safe haven? [Let me explain.] Words: 605

10.  Peter Schiff on Gold: Don’t Look a Gift Horse in the Mouth!

Following the crowd has never been the reason to buy gold. After all, that same logic would have recommended buying a house in Phoenix five years ago. Since the fundamentals still point to gold’s long-term viability… why are investors responding by selling gold and buying dollars and euros? I was always told not to look a gift horse in the mouth… so take advantage of the dip. Words: 880

Share
Previous George Soros: a Great Depression-like Scenario Could Very Well Play Out – Here’s Why (+2K Views)
Next Both Stocks and Bonds are Expensive! Here's Why