Lorimer Wilson February 3, 2016 Comments Off on These Catalysts Could Easily Lead to a Large Market Crash This Year (+3K Views) 3,506 Views

[In this article I don’t predict]…a hard date or magnitude of the next market crash…[but] merely point out that there are several catalysts [as discussed below] that could easily lead to a large market crash in 2016.

The Cyclical Nature of the Market

One of my main complaints about buy and hold investors is that they fail to recognize the cyclical nature of the stock market, of industries, and of their individual holdings. Just as we know that International Business Machines (IBM) consistently underperforms during Q1 and Q2, we know things about the wider market as a whole. For example, every seven or eight years, the bull market comes to an end, giving way to a (usually) brief bear market.

Low Oil Prices Are NOT a Catalyst to a Market Crash

These days, “market crash” and “oil prices” often come up in the same conversation but low oil prices are not a catalyst to a market crash. This goes contrary to most investors’ beliefs, but let me explain.

The Strength of the Dollar

A strong dollar is great for the individuals carrying it, assuming you’re leaving the U.S.. For everyone else, a strong dollar hurts. Consider emerging economies who see their currencies weakening against the dollar. Yes, exports to the U.S. might increase, but domestic investments on a whole become less appealing.

Instead of investing in the domestic market, citizens in China, for instance, would benefit from taking their money to the U.S. to buy bonds and stocks. This is exactly what is happening in China, despite the government trying to contain the act. The result is more investment in the U.S. and a bolstering of the U.S. stock market.

Realize that this is completely unrelated to the fundamentals of the U.S. economy. The Chinese, for example, simply see the U.S. as the least worst place to put their money…

For the domestic U.S. market, a strong dollar still hurts. Consider the numerous multinational companies that now have to report weaker earnings due to Forex issues. Aflac, for instance, makes 70% of its revenues in Japan, where the U.S. dollar gets me 120 Yen; when I visited three years earlier, my dollar only got me 80. The wave of negative Q4 earnings reports have in part been affected by Forex rates that stem from a strong dollar.

I doubt it is a coincidence that the U.S. Dollar Index has tended to spike prior to a market crash. Look at how the real dollar index (blue line) rose before 2000 and 2008; now look at it today: 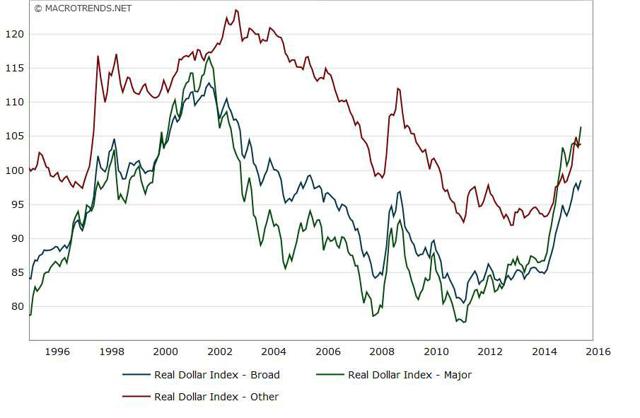 The high yield bond (or junk bond) spread is also informative in predicting bad things to come. In the following chart, breaking the 7.5% line is indicative of a problem. The 2000, 2008, and 2011 crashes were all preceded, or corresponded with, breaking that line: 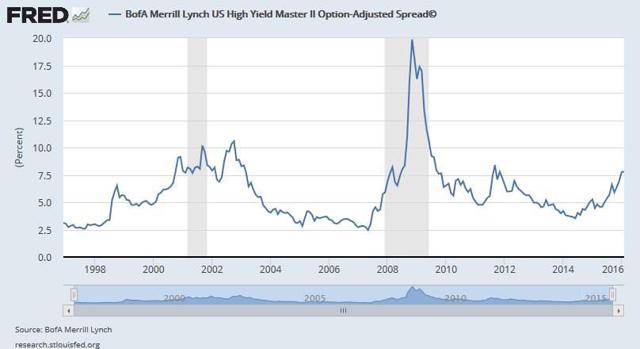 Notice that we have just broken that line once again. The implication here, in fundamental terms, is that investors are no longer willing to risk loaning money to risky companies without excessive compensation. This equates to a lack of funding for said companies and the result is fewer and lower loans from investors, less spending from companies, and a more stagnant economy overall. In terms of sentiment, investors are no longer willing to take on the risk they were happy to take on during the nice bull market ride from 2011 to now. That is, fear is starting to set in.

The Market Is Overvalued

…Recently, I have been seeing many overvalued companies and very few undervalued companies. Statistically, I should see roughly 50% of each but this is not the present state of things…[as there are] many fundamental reasons that explain the overvaluation. Among them are:

The Fed Ponzi scheme is a bit too political for me to get into, and I’ve already discussed the foreign investment issue, so let’s quickly talk about the remaining two. Let’s tackle bad news being good news first.

Welcome to 2016, where any governmental attempt to intervene in the stock market is met with good response. Any signs of artificial pumping of money into the stock market lifts stock prices. You only need to look at the market’s reaction to the Bank of Japan’s adoption of negative interest rates to see this.

The basis of the regulation is not good for the economy but the consequences inflate stocks. Investors know this and go with the flow, taking bullish positions. Any bad news that can be seen in a good light is.

Much of the recent past has been characterized by companies not knowing what to do with their free cash flow. The answer comes in the form of buybacks. When companies buy back outstanding shares, they make each outstanding share worth more, thus bolstering the price of the stock. This has led to many inflated prices and, because buybacks are at a relative high, encroaching upon 2008-levels, this implies an artificial inflation of the stock market as a whole: 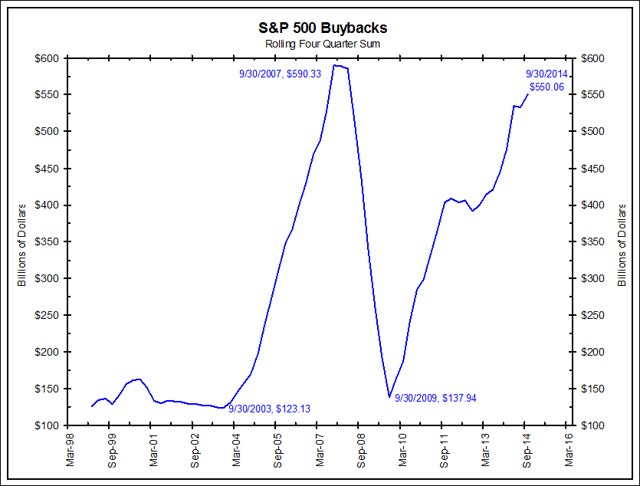 What Can Save Us?

The same thing that can keep the market afloat in the short term is the same thing that has been keeping the market afloat: More money input in spite of the fundamentals. While big companies lay off employees, the Fed can take taxpayer money and use it as a stimulus. Alternatively, they can re-engage in quantitative easing, shortening the U.S.’s path toward becoming a bigger version of Japan.

I wouldn’t put it beyond the government to intervene in the markets, as, after all, it’s worked thus far. However, without the fundamentals bolstering the market, we are walking a thin line. Once investors begin to see that the market lacks reason to be this high, they will start pulling their money out, creating a dominoes effect that hits other investors, hedge funds, and the algorithms that constitute half of the market action.

Ultimately, however, nothing can hold the market up for a longer period sans (without) a true fundamental change in the economy. Such changes do not occur quickly. The only remaining solution for the current market is a series of corrections – or all the corrections at once in the form of a market crash/bear market.

I am not a doomsayer. Rather, I have simply noticed through my studies of the market that the prices have become misaligned with the fundamentals. In addition, other factors, such as buybacks and junk bond yields, are pointing to a significant correction at the very least…

[The original article by Damon Verial is presented here by the editorial team of munKNEE.com (Your Key to Making Money!) and the FREE Market Intelligence Report newsletter (see sample here – sign up in the top right corner) in a slightly edited ([ ]) and/or abridged (…) format to provide a fast and easy read.] Related Articles from the munKNEE Vault:

The oil price bear market will have made it’s final bottom BY early February at $25 and then embark on a bull market that will target a trend towards a late year high of $60…This oil price trend and the stock market’s oversold state are also converging towards a stock market bottom for 2016 in a time window that probably runs for another 2-3 weeks. Here are the specifics.

The top 14 investment banks ALL project that the S&P 500 will go up in 2016 with an average increase of 6.5%…This is understandable. A falling stock market is bad for business and these banks depend and thrive on the bullish excitement and expectations of their clients. However, we at Carden Capital, have adaptive strategies that can handle up and down markets, so we can tell it like it is, and in this case, we are highly confident that the projections of those 14 investment banks are going to be dead wrong. In fact, we are confident that the market will be down in 2016, and will enter into a corrective phase. With that introduction, we present to you the top 10 reasons the stock market will tank in 2016.

5. If You Own Stocks Then This Article Is a MUST Read

There is literally nowhere for the bond market to go except down and, when this bull market turns into a bear, it will create chaos and financial devastation all over the planet.

8. Insights Into the Bond Market and How to Trade Them

This article provides you with an excellent understanding of what bonds are, the advantages of owning them and how to go about trading them.

9. Bursting of Bond Bubble Will Make 2008 Stock Market Crisis Look Like A Picnic!

Many investors think that we could never have a crash like the melt-down in 2008 but they are wrong. The 2008 Crisis was a stock and investment bank crisis – but it was not THE Crisis. That will happen when the biggest bubble in financial history – the epic Bond bubble – bursts. Let me explain.

Share
Previous Where Should You Put Your Money? Why? (+2K Views)
Next This Economic Recovery Is A Grand Illusion – Here Are 8 Reasons Why