2 Indicators Suggest Silver Appears to Be Topping – Here’s Why

I believe the signals show that silver is either at, or very close to, a short-term top. Let me explain.

The above comments are edited excerpts from an article* by Ivan Y. as posted on Seeking Alpha.com under the title Silver Appears To Be Topping.


The following article is presented courtesy of Lorimer Wilson, editor of www.munKNEE.com (Your Key to Making Money!),  www.FinancialArticleSummariesToday.com (A site for sore eyes and inquisitive minds) and the FREE bi-weekly Market Intelligence Report newsletter (register here; sample here) and has been edited, abridged and/or reformatted (some sub-titles and bold/italics emphases) for the sake of clarity and brevity to ensure a fast and easy read. This paragraph must be included in any article re-posting to avoid copyright infringement.

Ivan goes on to say in further edited excerpts:

…June has historically been the worst month of the year for silver, declining in price in fourteen of the last twenty years in June…[but] this year has moved against that historical tendency…up over 11% for the month, which is the best performance it has had in at least the last 24 years. I say ‘at least’ because the data I have only goes back…[that] far.

Silver’s positive performance…[in June was] due to…

Silver has rallied by over $2 from its bottom in early June, but where is it headed now?

…I believe the signals show that silver is either at, or very close to, a short-term top [because]: 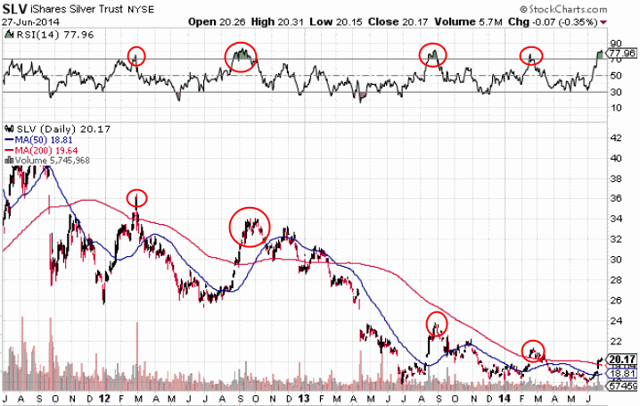 For silver bulls, there is at least one reason to believe that prices have further upside, however, and that is that July is historically a good month for silver. 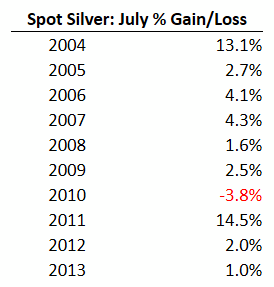 As you can see [from the above table], silver has gone up in nine of the past ten years…Please note that if I expanded the above table to show the last twenty years, the picture for July would not look as pretty…

If you are a long-term silver bull and already have your positions and plan to hold for several years, then nothing I wrote about in this article really matters. Any price movement in the next week or month is just noise and won’t have any impact on the price in the long-term.

However, if silver does indeed experience a sell-off due to overbought conditions, then another opportunity to accumulate may present itself.

*http://seekingalpha.com/article/2291353-silver-appears-to-be-topping?ifp=0 (© 2014 Seeking Alpha )
Related Articles:
1. The Pain Is Probably Not Over For Silver Bulls! Here’s Why

Silver has now dropped to $19 and is down 3.1% for the year. Unfortunately, the pain is probably not over – yet. END_OF_DOCUMENT_TOKEN_TO_BE_REPLACED

2. Move Up In Silver To Be Sharper, Greater & Faster Than Gold – Here’s Why

Analysts and investors seem to be very bearish towards silver, but we think that the fundamentals of silver are now becoming extremely attractive in terms of contrarian opportunities. Volatility and risk are not always commensurate, and we believe that silver offers investors fundamentals that can be much stronger than expected and returns that would be magnified by the small size of the silver market (and the bearish positioning by participants). Contrarian investors would be wise to take note. END_OF_DOCUMENT_TOKEN_TO_BE_REPLACED

Share
Previous Bitcoin: the Ins and Outs Of Everyday Use & What the Future Holds (+3K Views)
Next Where Is Gold Likely Headed & Why?

New Data: Which Countries Have The Most Gold?