What Are the 2 Catalysts That Cause Major Market Corrections Telling Us Today? (+2K Views)

[There are a number of] potential pitfalls out there for the market but, right now, the

behavior of the main catalysts for a major correction suggest that there continues to be more right than wrong with the market. [Let me explain.]

The above introductory comments are edited excerpts from an article by Tom Smith (FinancialSense.com) as originally posted on SeekingAlpha.com under the title The Catalysts For A Correction.

Smith goes on to say in further edited excerpts:

What are the catalysts for a major correction? The two most consistent drivers behind just about every major pullback we have experienced since the 1970s have been:

so let’s look at the chances for those two issues to derail things this time.

If you chart the price of oil with the market you will consistently see a huge spike in year-over-year energy prices right before the pullback. That issue is not a concern at the moment. Oil prices are slightly down year-over-year.

The Fed has actually been injecting less money into the system since late last year. Ben Bernanke announced the beginning of the taper last year. The taper will likely come to an end around October. This news is out. It is rarely the devil you know that causes problems. Fed policy hasn’t changed in some time.

The Leading Economic Indicators (LEIs) is another key area to monitor the overall direction of the market and give us valuable insight into the economy. Remember: the market is a leading indicator. The market itself gives us clues as to what the future holds for us. The LEIs took a breather early this year in the face if a frigid winter. The market did have a sharp correction in response to the slowdown. As the LEIs have improved since the spring, the market has continued its move higher. Frankly, I see nothing alarming in the long-term trend of the LEIs right now. 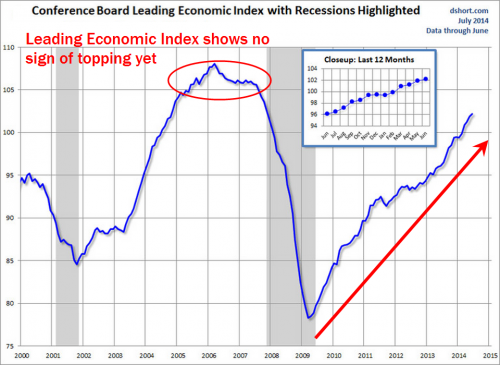 Consumer sentiment is also not in the euphoria stage. When everyone is certain the market will go up forever we all need to look out.

Quarterly earnings need to be strong and they currently are.

Those are the potential pitfalls out there for the market and, right now, there continues to be more right than wrong with the market. If things begin to deteriorate in any of the above areas then it will be time to be more cautious. [While] there are… many stocks…that are in their own private bear markets…the weight of the evidence remains in the bull camp for now.

1. A Stock Market Correction/Crash May Not Occur For Quite A While – Here’s Why

Some investors are sure we’re heading for a crash because we’ve had such an uninterrupted rise in stocks but these things can last much longer than most people realize. While a crash is never out of the realm of possibilities, just because stocks are up doesn’t mean they have to immediately crash. Eventually they will be right. It’s the timing that gets you on these type of calls. END_OF_DOCUMENT_TOKEN_TO_BE_REPLACED

2. Stock Market Bull Likely to Continue for Another 2-3 Years – Here’s Why

If you follow the mainstream financial print media, you may have seen that many prominent publications have recently called this stock market a ‘bubble’ and many are waiting for the elusive stock market crash! In our view, however, such bearish ‘bubble’ sentiment is precisely the reason why, in our opinion, the party is likely to continue for at least another 2-3 years. Here’s why & what sectors to take full advantage of. END_OF_DOCUMENT_TOKEN_TO_BE_REPLACED

3. Relax! The Stock Market Is Anything But “Scary-Overvalued” – Here’s Why

Are we near the end of one of history’s great stock market rallies? I don’t think so. Yes, prices are in the upper half of their long-term trends, but it’s not what you might call “scary-overvalued.” There is still plenty of room on the upside before historical precedents are violated. Let me explain further. END_OF_DOCUMENT_TOKEN_TO_BE_REPLACED

Share
Previous Dow About to Correct 14-18%, Then Increase 111-122% Into 2017
Next Bubble-level Valuations Don’t Cause Bear Markets! These Factors Do