Which Is Better for U.S. Equities – A Stronger or Weaker U.S. Dollar?

While there are times where the opposite has been the case, in the vast majority of longer-term

periods, history has shown that a stronger dollar has been better for U.S. equities than a weaker one. [This article presents 2 charts that show] the interaction between the U.S. dollar and equity prices [to support the aforementioned conclusion]. Words: 422

The direction of the U.S. dollar and its impact on stock prices has been an area of contentious debate over the years.

Looking at the recent interaction between the U.S. dollar and equity prices, it would appear that the anti-dollar crowd seems to have the upper end of the argument. The chart below shows a comparison of the U.S. Dollar Index and the S&P 500 over the last six months. As shown in the chart, as the U.S. dollar was in a sideways range at the highs of its six-month range from November through January, U.S. equities sold off hard. It wasn’t until early February when the dollar started to sell off that equities managed to rally. 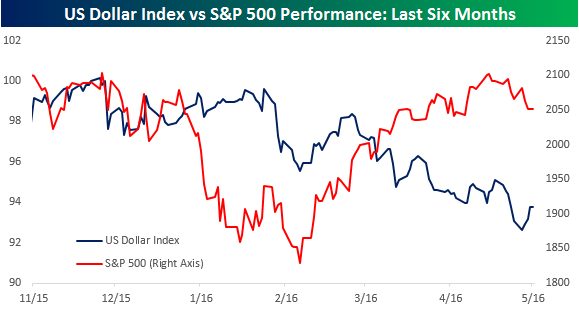 While the rally in equities off the February lows has been accompanied by a falling dollar, taking a little bit of a longer-term view, the inverse relationship between the two isn’t nearly as clear-cut. Looking at the last two years, the dollar and stock prices have been more positively correlated. The chart below from Friday’s Bespoke Report shows that from mid-2014 through early 2015, both the dollar and the S&P 500 rallied and were in steady uptrends. Then in early 2015, shortly after the dollar peaked and traded in a sideways range, the S&P 500’s rally ran out of steam. 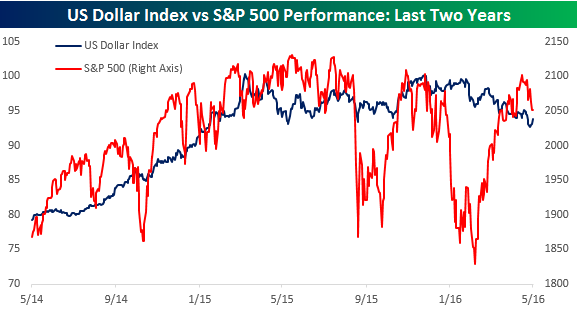 If the weaker dollar was, in fact, a positive for U.S. equities (instead of a period of heightened volatility during which the S&P 500 is trading right where it was when the dollar index peaked more than a year ago) one would expect to see equity strength, which has certainly not been the case.

While there are times where the opposite has been the case, in the vast majority of longer-term periods, history has shown that a stronger dollar has been better for U.S. equities than a weaker one.

Disclosure: The original article, by BespokePremium.com, was edited ([ ]) and abridged (…) by the editorial team at

Share
Previous So You Want To Join The Millionaires’ Club?
Next Retirement Halfway Is No Way to Live – Going Full-circle Is the Way to Thrive! Here’s How