What’s the Probability of A Recession Coming In 2015?

Bear markets tend to be deflationary and fear-based events, which eventually triggers demand for defensive-oriented bonds and, therefore, looking at hard data from the bond market can help with the assessment of recession probabilities. So what is the current Treasury yield spread suggesting is the probability of a recession this year?

So writes Chris Ciovacco (ciovaccocapital.com) in edited excerpts from his original article which can be read in its entirety HERE.

[The following article is presented by  Lorimer Wilson, editor of www.munKNEE.com and the FREE Market Intelligence Report newsletter (register here) and may have been edited ([ ]), abridged (…) and/or reformatted (some sub-titles and bold/italics emphases) for the sake of clarity and brevity to ensure a fast and easy read. This paragraph must be included in any article re-posting to avoid copyright infringement.]

The Wall Street Journal recently published two recession probability charts as presented below. The first one tells us that the odds of a recession, based on hard data, were sitting at roughly 40% in late 2007. Was the hard and observable data helpful? Yes, the hard data was in hand before the S&P 500 dropped from 1468 at the beginning of 2008 to 666 on March 9, 2009 or 54%. 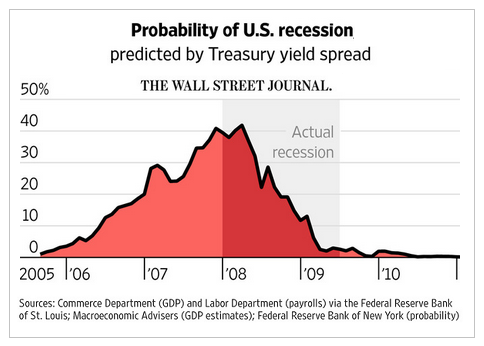 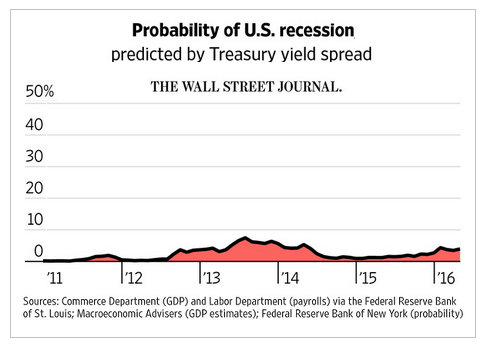 Investment Implications – The Weight Of The Evidence

Could it be different this time? Sure, it could be, but fear is fear, and eventually it has to start showing up in the hard data but we need to see it rather than anticipate it and, remember, the data was waving red flags in late 2007 before stocks plunged an additional 54%; no anticipation was necessary…

1. Head’s Up! A Perfect “Financial” Storm May Be Developing

In the financial world at this very moment, we have 8 different “weather systems” that are all developing in real time. If several of the more powerful components were to converge – and reinforce each other – then we could very rapidly reach the point of greatest financial instability that the world has seen since 2008.

2. Should We Fear a Fed Interest Rate Hike At This Point?

3. The Next Major U.S. Economic Downturn Is Dead Ahead – Here Are 16 Reasons Why

There are many out there (including myself) that believe that the next major economic downturn is dead ahead. As you will see in this article, a whole bunch of things are happening right now that we would expect to see if a recession was beginning.

4. Level of World Financial Market Complacency Is Downright Astounding – Even Stupid! Here’s Why

The level of complacency in world financial markets is downright astounding – even stupid – and only an eventual thundering crash of the system will bring the madness to an end.

5. Majority of Americans Engaging in Irrational Wishful Thinking About Economy! Here’s Why

There is certainly something to be said for being positive and thinking that anything is possible and, as Americans, optimism seems to come naturally for us. When we deny reality and engage in irrational wishful thinking, we are engaging in something called “hopium” – the irrational belief that, despite all evidence to the contrary, things will turn out for the best.

6. Is An Economic Crash Coming Soon? These Analysts Think So – Here’s Why

Dozens of “analysts are convinced that the U.S. economy is going to hell in a hand basket – and soon. How sound are their analyses of the current economic situation? Will they be proven to be very insightful or nothing less than fear mongers looking for attention? Their views are all here. You be the judge.