If the U.S. economy weakens in the second half as a result of higher energy prices, that could cause interest rates

and the dollar to fall — fueling a rally in metals.

The above comments are edited excerpts from an article* by Ryan Puplava (FinancialSense.com) entitled Gold Benefiting From Behind-The-Curve Fed.

The following article is presented courtesy of Lorimer Wilson, editor of www.munKNEE.com (Your Key to Making Money!) and the FREE Market Intelligence Report newsletter (sample here) and has been edited, abridged and/or reformatted (some sub-titles and bold/italics emphases) for the sake of clarity and brevity to ensure a fast and easy read. This paragraph must be included in any article re-posting to avoid copyright infringement.

Puplava goes on to say in further edited excerpts:

[How these 3 factors unfold are extremely important for a sustained rally in the price of gold:]

The CPI has been rising as of late. Of course, the Fed will be labeled as “behind-the-curve”, as it pertains to inflation, because right now they want to see healthier (in their eyes) levels of inflation. It is only when the Fed sees persistently high levels of inflation and inflationary expectations that they will begin to react. 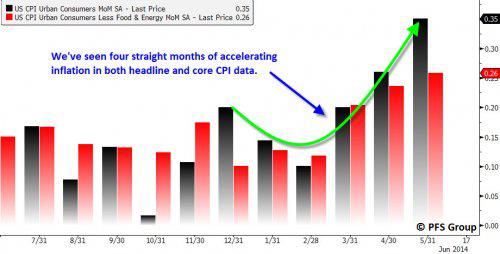 I believe the gold market is finally waking up to this phenomenon. I also think that gold investors and traders are finally waking up to the idea that, technically speaking, gold has been, and is currently, going through a bottoming process. Even the miners are showing signs of confirmed bottoms like Agnico Eagle Mines (AEM) and New Gold (NGD) with many more high quality names lunging to reach the March highs like Pan American Silver (PAAS), Gold Corp (GG), and Silver Wheaton (SLW).

Before going much further into precious metals, I want to reiterate the factors that influence the price of gold: 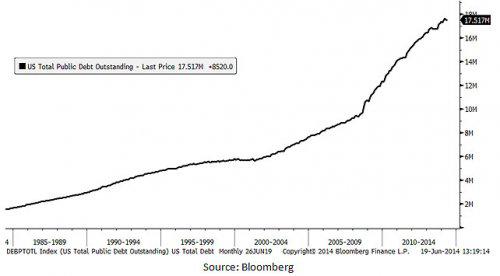 The U.S. dollar has also been rising on:

The only thing that has changed recently is that the Fed plans to tighten sooner than mid-2015….[and that has caused] traders to reverse expectations and bid up metals given the continued dovish posture of the Fed.

Most traders are more interested in the interest rate differential between our central bank and the central bank of other regions (currencies). As the Federal Reserve bank is still purchasing $35 billion in long-term bonds, it is still being accommodative, but the writing is on the wall with already a drop of $50 billion in purchases over the last half year. Attention has turned towards Fed policy on rates.

If we begin raising rates while other central banks continue to lower or keep theirs artificially low, it puts upward pressure on our currency as foreign investors invest in a higher rate environment here.

A change in monetary, fiscal, and regulatory policy is necessary to beat back the forces of recession and deflation. If the messages of falling gold prices and falling interest rates are not enough to gain the attention of policy makers, I suspect that the specter of future falling stock prices throughout the world will be. That is what is in store for us if the recessionary/deflationary bias in the world economy that gold and bonds are signaling, reasserts itself. END_OF_DOCUMENT_TOKEN_TO_BE_REPLACED

2. The Future Price of Gold and the 2% Factor

It is my contention that the price of gold rallies whenever the U.S. dollar’s real short-term interest rate is below 2%, falls whenever the real short rate is above 2%, and holds steady at the equilibrium rate of 2%. Let me explain. END_OF_DOCUMENT_TOKEN_TO_BE_REPLACED

The REAL Reasons Behind the Current U.S. Inflation Problem