What the 1970’s Performance of Gold, Silver and USD Says About Tomorrow (+2K Views)

Many lessons can be gleaned from history and, while no two periods are identically alike, there are often many similarities to learn from. The current period, for example, is often compared to the Great Depression in regards to unprecedented government action as well as with the 1970s in regards to trends in commodities and inflation. [Let’s take a closer look.] Words: 1165

So says Chris Puplava (www.financialsense.com) in an article* which Lorimer Wilson, editor of www.munKNEE.com,  has further edited ([  ]), abridged (…) and reformatted below  for the sake of clarity and brevity to ensure a fast and easy read. Please note that this paragraph must be included in any article re-posting to avoid copyright infringement. Puplava goes on to say:

Over the years I have often drawn parallels to the 1970s given a similar pattern seen in the stock market and the S&P 500 [and below are two] charts that give you an idea how exceptionally similar the patterns are between then and now: 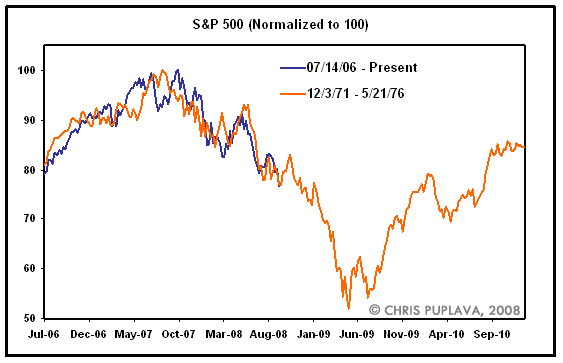 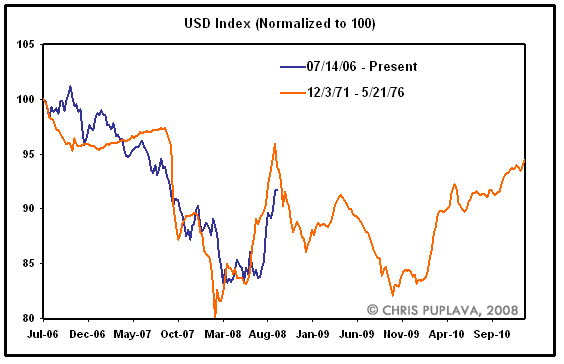 Given the unique nature of how the markets and the dollar played out in the 1970s, I thought it would be useful to see how the rest of the decade similarly performed. When looking at gold and the USD, it does appear we are following the 1970s script, but on a more accelerated pace. Most of this is well owed to the double rounds of money printing or QE a-la Helicopter Ben to save the economy, a program that didn’t exist back then.

Looking at the figure above, it does appear that the pattern seen in the dollar is repeating the 1970s path and we may be entering the waterfall decline in the greenback that was seen in 1978. If that is the case, then cash is indeed trash and don’t be surprised to see the stock market rally in nominal terms and gold and commodities to jump significantly.

What is also interesting to note from that time is that the USD Index’s sharp sell-off ended in 1978 and gold had a mild pullback before vaulting much higher. After the USD’s initial sharp bounce it essentially traded sideways and gold continued higher unabated.

The USD vs. Interest Rates – Then and Now

While it may seem counterintuitive for gold to rally along with the dollar, there were other factors at work. Given the slide in the USD in 1978 import inflation was building and by the time the USD Index bottomed inflation accelerated and real interest rates turned negative. Some of the strongest returns in gold in the 1970s came when real interest rates were negative as monetary policy (interest rates) fell behind inflationary trends.

This is seen in the figure below which shows in the shaded red period that, while the USD was firming, real interest rates were on a straight path southwards and it wasn’t until both the USD and real interest rates headed higher together (shaded green region) that gold finally peaked and its secular bull market came to an end.

Fast forwarding to the present time, at 0.77%, real interest rates (10yr UST yield less CPI YOY % Chg) are heading south and not too far off from going negative. Real rates are likely to plunge through the rest of the year given the slide in the USD…

Given our transition from a manufacturing-based economy [back then] to a service-economy [these days] the trends in the USD and import prices [now] show a stronger correlation to inflation rates than to labor costs [as it did back then]… A weak USD makes foreign imports more expensive and the present slide in the USD is going to lead to a spike in import inflation ahead. The year-over-year (YOY) rate of change in the USD Index leads import price inflation by several months and argues for a spike in import inflation north of 4% in the coming months. 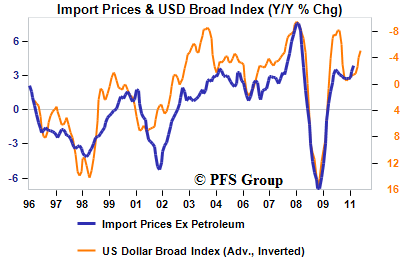 The Chinese Renminbi Exchange Rate vs. US Import Inflation

One of the main culprits for rising US import prices is China, given our large trade deficit with them. Shown below is the USD and Chinese Renminbi exchange rate where you can see how periods in which the Renminbi strengthens relative to the USD (black line declines) leads to rising import prices from China. Consequently, the appreciation in the Renminbi since mid 2010 has led to a resurgence in US import inflation. It is the below development that should cause US Congress members to be careful what they wish for in terms of China revaluing their currency. 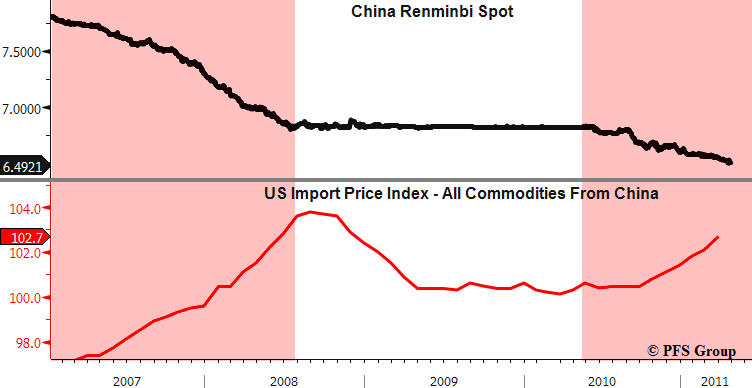 With the easy monetary policy and complete lack of recognition by Fed Chairman Bernanke in terms of what the USD is doing to commodities and import prices, we are likely to see the dollar continue to weaken ahead which has resulted in the major 3-year trend line support being broken as it was in the 1970s.

Back then, once support was broken we witnessed gold rally more than 300% and the S&P 500 rally in nominal terms but decline in real terms. The present slide in the USD will lead to higher inflation and thus lower real interest rates which will only be bullish for gold ahead…

Until Ben Bernanke restores the Fed’s credibility in terms of fighting inflation, and until the U.S. government gets serious about its long-term fiscal position, we are likely to see further records set in the USD and gold, in opposite directions.

Share
Previous Why Hyperinflation is Not Likely – Let Alone Imminent (+2K Views)
Next Richard Russell: Demise of the "Yankee Dollar" vs. the Rise in Gold