What Do the Similarities & Differences Between the 1980 Top in Gold & the Current Situation Mean for Its Future?

The fact that nobody knows with absolute certainty where gold will

go from today onward causes people try to make their own guesses about what can happen with the yellow metal. One of the methods to do that is to look back into past situations and try to estimate if what is happening now is somehow similar to those past events.

The situation in the gold market today is different than the one in 1980 in a few important areas. Even if past patterns don’t give you any certainty, though, sometimes they can limit the uncertainty. Let us analyze that in more detail. Words: 1260; Charts: 2

So writes Przemyslaw Radomski, CFA (www.sunshineprofits.com/) in edited excerpts from his original article* posted on Seeking Alpha entitled 1980 Top In Gold As A Reference Point For Precious Metals Investors.

This article is presented by www.FinancialArticleSummariesToday.com (A site for sore eyes and inquisitive minds) and www.munKNEE.com (Your Key to Making Money!) and may have been edited ([ ]), abridged (…) and/or reformatted (some sub-titles and bold/italics emphases) for the sake of clarity and brevity to ensure a fast and easy read. The author’s views and conclusions are unaltered and no personal comments have been included to maintain the integrity of the original article. Please note that this paragraph must be included in any article re-posting to avoid copyright infringement.

Radomski goes on to say, in part:

What happens now can be similar to what has happened before….It may be possible that some patterns repeat themselves. The same goes for everything that’s happening with gold…. 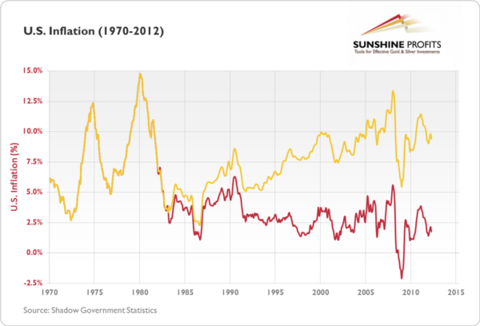 The annual inflation rate went up from 5.2% in January 1977 to 14.8% in March 1980. This rise was partially due to the deteriorating political situation in Iran, one of the OPEC nations. In early 1979, Iran saw a revolution that resulted in political power being shifted from the Shah of Iran to a religious leader, Ruhollah Khomeini. In the wake of the revolution, oil exports fell, curtailing global supply and driving prices of oil higher which, in turn, fueled the rise in prices of many other goods.

This is, however, only part of the story. OPEC countries increased oil supply to compensate for shortages, but the oil crisis was exacerbated by an embargo on Iranian oil imposed by U.S. President Jimmy Carter following an incident in the U.S. Embassy in Teheran, where more than 60 U.S. citizens had been taken hostage. With the embargo in place and public panic about the availability of oil, buyers rushed to acquire oil while they could. Increased demand caused even further increases in prices, and so the cycle continued. This is quite important, as it shows that the effects of adverse events can be worsened by crowd behavior. 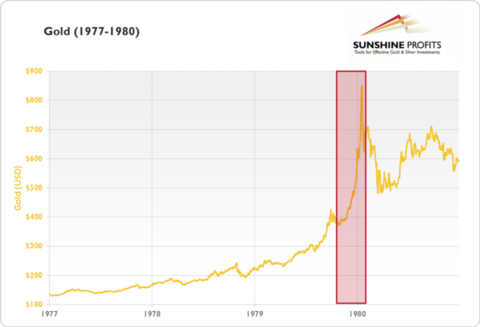 It is particularly worth noting that even though the bull market had started long before 1980, the most significant appreciation (in dollar terms) occurred in December 1979 and January 1980, when prices went up from $428.25 (December 3, 1979) to $850 (January 21, 1980)….The very end of the bull market saw the most significant appreciation in the yellow metal, and that the price of gold followed a path of”exponential” growth during this period. This period of exponential growth was partially triggered by the fact that:

Once the panic about inflation and the war in Afghanistan was over, gold retraced back to as low as $485.25 as soon as March 27, 1980 so the craze started in December the previous year, and lasted for only about four months. This relatively short period seems to be defining how people perceive the 1980 bull market now.

A Comparison Between 1980 and the Current Bull Market in Gold

A comparison of the two periods shows that…the situation today is, in fact, very different than it was in 1980 so why do we even use the 1980 top in comparisons?

To sum up, we use the 1980 top for comparisons not because the current economic situation is very similar to the one in 1979-80. In fact, it’s very different in some crucial areas, but the key point is the same — the fundamental situation was positive for gold in the 1970s, and that is the case right now.

We use [the 1980 top for comparison purposes] because it seems that human nature and emotionality hasn’t really changed since 1980. We still can see a period of “crazy buying” at the end of the bull market. What has changed, though, is the number of people that can participate in the bull market and the technological infrastructure.

Because of the above, the 1980 top can only be used as a general reference point, and not as a precise target. The changes in the markets may make the final rally of this bull market significantly more volatile than it was in 1980.

Our subscription service provides detailed technical analysis of where the price of gold, silver and precious metal stocks are going short term (in the next week or two), intermediate term (within the next 3-6 months) and long term (the ultimate top) in each stage of their respective bull runs. This service comes with detailed charting based on conventional technical analysis and our proprietary fractal analysis based on the ’70s. Below are some of our latest comments and rationale for expected price movements in gold without illustative charts which are only available to subscribers. Words: 1000

Share
Previous Dr. Faber and I Concur: There Are Major Reasons to be Very Cautious in 2013 – Here’s What To Do (+2K Views)
Next The Fiscal Cliff Drama Is Over! Here Are the Winners & Losers