article which will bring us up to date as to the degree of current bearish sentiment regarding both gold and silver using no fewer than 5 sentiment indicators (with 9 illustrative charts), as well as provide the reader with an opportunity to observe the price outcome of previous bearish extremes using these sentiment indicators.

So says John Townsend (http://thedailygold.com) in edited excerpts from his original article* entitled Gold and Silver: Sentiment Reversal is Inevitable.

Townsend goes on to say in further edited excerpts:

When we begin the sentiment indicator discussion we will look at charts of:

First, though. let’s briefly consider the concept of investor sentiment.

My observation is that sentiment’s crystal ball, particularly when observed at an extreme, plays the ultimate trump card in foretelling a market’s reversal of price direction….

Yes, there are two players for each trade – the buyer and the seller – and in our present precious metals situation, this leads us to consider the concept of shares moving from “weak” hands to “strong” hands….

You may have heard comments when a particular market bottoms and then begins to trade higher and then continues to trade even higher yet, despite “bad” news, the assertion that the bullish price movement seems to make no sense – that it cannot possibly be sustained. At this time it appears to nearly everyone that:

The above thoughts are precisely what make this article’s argument dead on target, in my opinion. That is, sentiment at extremes can and often does trump both technical and fundamental analysis. We are about to examine a number of these sentiment indicators which will leave little doubt that the precious metals market is presently at a sentiment extreme of historical proportion.

Let’s now take a look at the 5 sentiment indicators I have prepared for detailing the current gold and silver market sentiment and see what they are telling us.

The red line in the charts are the ETF’s price movement over the recent 2 years (GLD above, SLV below). The blue line is the put/call volume ratio. This considers the trading day’s volume of puts traded and is divided by the volume of calls traded. Generally, the higher the put/call ratio, the more bearish traders are about the ETF’s likely price movement, while the lower the put/call ratio, the more traders believe the ETF is bullish and going to rally higher. (Both charts courtesy of Schaeffer’s Investment Research.) 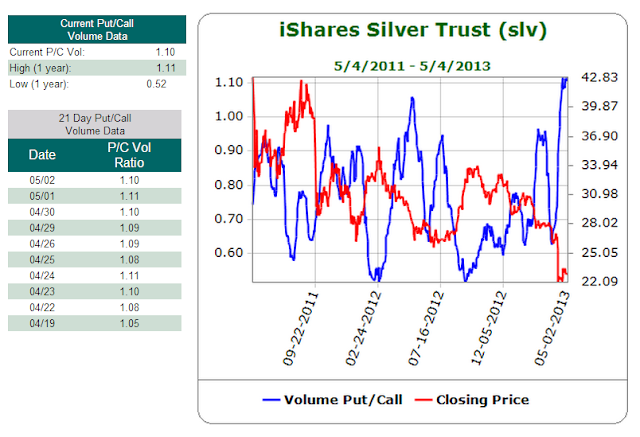 Undoubtedly you have noticed that both charts reveal that the put/call ratio is at the highs of the past two years; meanwhile price is at the lows of the past two years. I will leave it to you to observe the repetitively flip-flop relationship between this sentiment indicator and price movement. For me, anyway, this indicator leaves little doubt as to the upcoming direction of GLD and SLV.

The Hulbert Gold Sentiment Index chart below (courtesy of Mark Hulbert’s Newsletters) shows us that gold sentiment at present is even more depressed than at gold’s infamous 2008 low. The first chart is. 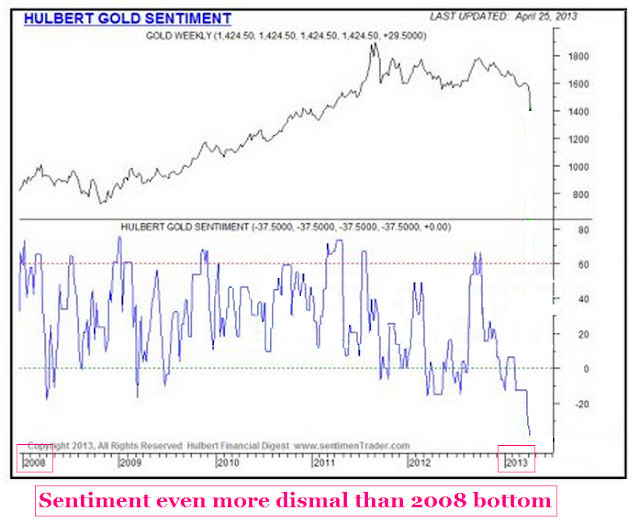 The second chart below (courtesy of Short Side of Long) offers a sweeping view of gold’s price movement over the past 17 years, as well as the locations of noteworthy extremes of bearish sentiment. Incredibly (and once again) our current bearish sentiment breaks all previous records with a reading of -31%. 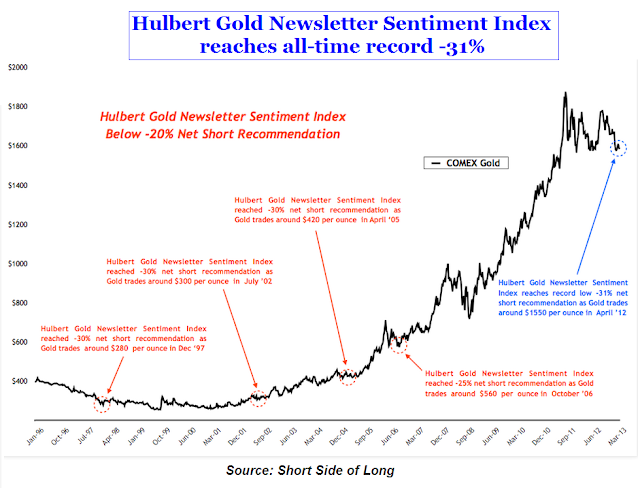 The Blees Rating is simply a calculation that uses the COT report data on the positioning of commercial traders in comparison to their positioning 18 months previously. 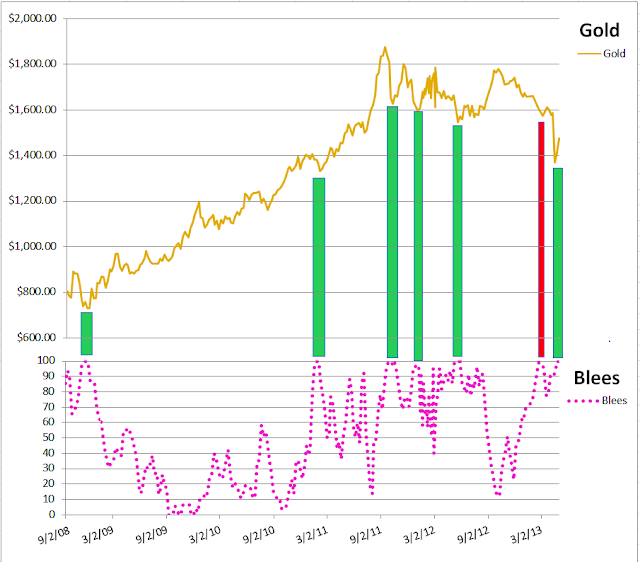 The red bar I added in the chart above connects a Blees rating of 99 with price just before our infamous episode of a two-day price crash in gold. Though I neglected to add another red bar in September 2008, you will notice that nearly the same thing happened at that time. That is, the commercial traders bellied up to the bar with a reading of 94 then apparently and correctly smelled a rat. They backed off and price indeed made one final swoon. Then in early November 2008 they bellied back up to the bar and held a 100 Blees rating for 2 consecutive weeks followed by another week at 99. They nailed the true bottom. I have no doubt they have done it in 2013, as well.

The following chart of $GOLD (courtesy of SmartMoneyTrackerPremium) details the locations of the maximum Blees rating since 2003. 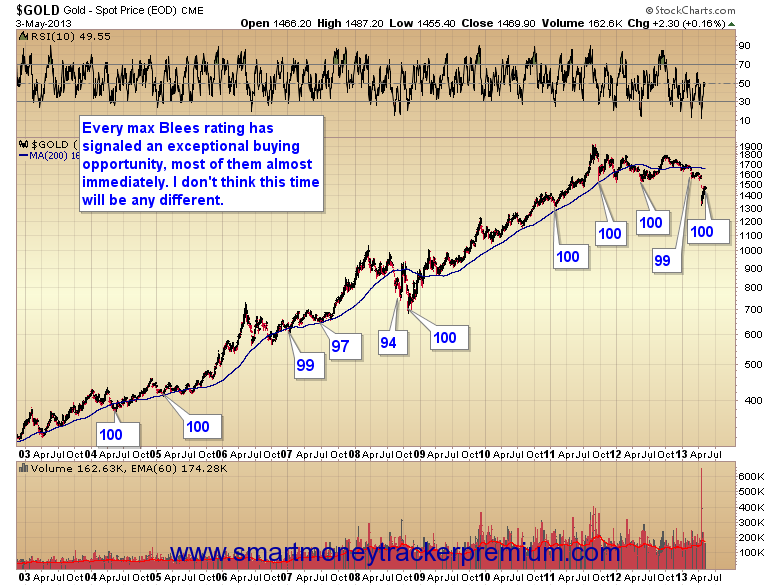 4. The positioning of gold futures traders as reported in the most recent Commitment of Traders (COT) report:

Both charts below are courtesy of GotGoldReport by Mr. Gene Arensberg.

First up is the commercials (dark blue line) and their net positioning of gold futures contracts since 2008. The price of gold is shown in magenta.

This group of traders [the commercials] is considered the smartest of the players and are hedgers by nature. It is indeed rare to find their net positioning anywhere near to just slightly short, as they are now positioned. Incidentally, they are now positioned exactly as when they correctly called the 2008 bottom. 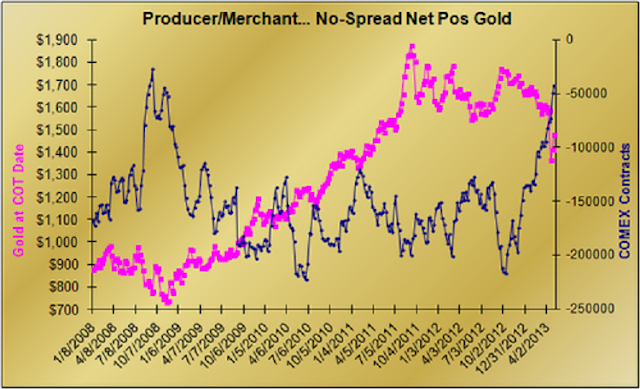 In Mr. Arensberg’s accompanying dialog with these charts he noted that the commercial traders method of operation is to add shorts as price rises and add longs (or sell shorts) as price falls. Interestingly, however, as gold has been raising $150 over the past two weeks, the commercials have been doing just the opposite of their norm. Instead of adding to their shorts as price has gravitated higher, they have reduced their shorts and added to their longs.

Yowzer! My take is that the commercials are essentially saying to the market, “bring it on”.

Now for the chart of the little guys trading gold futures, otherwise known as the non-reportables. 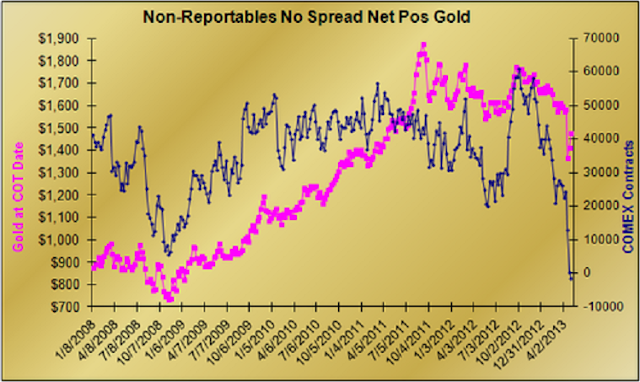 You can see in the chart above that for the first time since 2008 this group (sometimes also known as the ‘dumb money’) has a net position that is just barely short (below ZERO). In effect, this group does not have any skin in the game and that has not been seen before. They have been suckered into losing their net long position and will have to buy, buy, buy when they figure out the trend is up.

I created this chart and have added in the lower panel the Ulcer Index indicator. This is a volatility indicator that measures downside risk. The higher the indicator reads the higher the risk is considered to be if one continues to hold ‘Old Turkey’.

From a sentiment point of view, the higher the indicator reads the scarier the ride for the long investor. I looked at this indicator on the daily gold futures chart back 20 years and I can tell you what we just experienced was the first place roller coaster drop of the past 20 years. If you still have your lunch (like me) you are likely qualified as a “strong hands” investor.

There you have it. Sentiment on GLD and SLV options is crazy extreme:

I don’t make this stuff up and, after putting about 10 hours non-stop into making this article what it is, I have nothing more to say other than:

1. What Must Happen for Bull Market in Gold, Silver & PM Stocks to Resume?

Precious metals – Gold, Silver, Platinum, Palladium and there respective mining shares – have failed to sustain any rebound despite tremendously supportive sentiment amid an extreme oversold condition. Nevertheless, we believe that the bottom is in and a rebound should begin very soon. The question though is, “What will the driving force be for a sustainable rebound which will evolve into a new cyclical bull market?” Below are several options to be considered and my assessment as to which it will be – and why. Read More »

2. Gold & Silver: It Could Get Uglier! Here’s What the Charts Are Saying

The next chapter [in gold and silver] has yet to be written. One thing is likely to be certain, it will get uglier. The public will not be prepared for what could take a few more years to develop, and the potential for yet much lower prices for both gold and silver. Read More »

3. Gold Stocks Are a Compelling Buy – Here Are 3 Reasons Why

I believe the drivers for the yellow metal remain  intact, however, so for investors who can tolerate the ups and downs, gold stocks are a compelling buy. Here are three reasons Read More »

4. What the Charts Say About the Future Price Action of Gold & Silver

The monthly silver chart does not reflect what could be viewed as ending action for the decline.  If/as price rallies, it may be more of a futures selling opportunity than a sign of recovery.  As the structure stands, odds favor lower price attempts. Read More »

Going forward, if gold can break $1,478, the next level of interest is the closing price of $1,501 from April 12. If you are looking to get long gold, it would probably be best to wait until the commodity can get back above at least one of these levels before making a commitment. Read More »

7. Gold: Wait for Signs of Stabilization Before Buying In – Here’s Why

We are seeing signs of a bottom…in gold…but… prudence calls for waiting for some signs of stabilization before getting long. I would rather miss the first 10-20% move than lose another 50% should I get long prematurely. [Let me show you some charts that illustrate my caution.] Words: 288; Charts: 6 Read More

Share
Previous Relax ! Stocks Are In NO Immediate Danger – Here’s Why (+2K Views)
Next Stock Markets Ripe for a MAJOR Selloff – Here’s Why