Welcome Back to the Easy Debt Party!

Subprime loans have reached levels that were last seen only

during the financial crisis.  As fewer good borrowers are available, lenders are digging into every nook and cranny of the economy to find additional borrowers…In 2014 $189 billion in subprime loans were made.  Welcome back to the easy debt party.

By MyBudget.com. [The original article*, as posted on said site under the title Subprime lending at highest level since financial crisis hit: The three leading subprime categories are auto loans, credit cards, and student debt. $189 billion in subprime loans made in 2014 has been abbreviated below to ensure a fast and easy read.]

Subprime lending is rising in a big way…According to the Wall Street Journal almost 40% of loans for autos, credit cards and personal borrowing in the U.S. went to subprime customers (those with a credit score below 640 on a scale that tops out at 850) during the first 11 months of 2014 which amounted to more than 50 million consumer loans and cards totaling more than $189 billion, the highest levels since 2007, when subprime loans represented 41% of consumer lending outside of home mortgages.

$21 billion in subprime credit card debt was extended in 2014.

Another $26 billion in subprime personal loans were made in 2014.

A good portion of the consumer spending that is happening is coming from marginal borrowers. What happens [to them] when the economy hits its next recession? 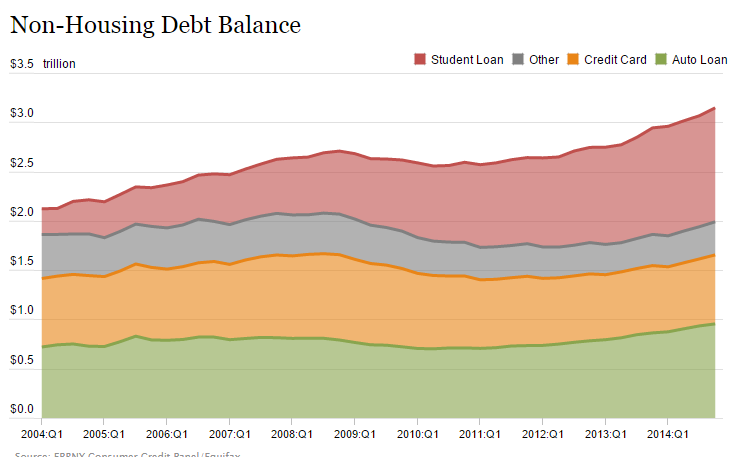 People are living on the marginal edge and we already know half of Americans are living paycheck to paycheck. [All this] access to subprime debt is going to do [is] allow them to consume future income (which in many cases is in the form of low wages) and make any ability for financial security disappear.

[Indeed,] since almost 40% of loans for autos, credit cards and personal borrowing in the U.S. went to subprime customers (i.e. those with a credit score below 640 on a scale that tops out at 850 reflecting late payments or too much debt relative to income) giving those with low scores more debt is to expect more defaults once slight hiccups hit.

Subprime is back again and of course the current narrative is that it is different this time.

The article above is presented courtesy of Lorimer Wilson, editor of www.munKNEE.com (Your Key to Making Money!), and has been edited, abridged and/or reformatted (some sub-titles and bold/italics emphases) for the sake of clarity and brevity to ensure a fast and easy read. This paragraph must be included in any article re-posting to avoid copyright infringement.

Related Articles from the munKNEE Archive:

1. Claim That There’s A U.S. Student Loan Crisis Is A Lie! Here’s Why

There is a consensus in the investment markets today believing that student debt is a major credit problem rivaling other credit problems that were disastrous over the last 30 years… This article seeks to explain the lies, damned lies and the statistics surrounding the student debt myth in the United States. END_OF_DOCUMENT_TOKEN_TO_BE_REPLACED

2. Student Loans: the Situation; the Problems; the Solution

Data from Barclays Research clearly shows that the strain on US consumers from student loans isn’t going to improve any time soon and that the risk to the taxpayers is on the rise. END_OF_DOCUMENT_TOKEN_TO_BE_REPLACED

Over the past three months, the year-over-year growth in credit card debt has exceeded wage growth in the United States. This is the first time we’ve seen this trend since the Great Recession. END_OF_DOCUMENT_TOKEN_TO_BE_REPLACED

During the credit crisis, one of the problems that occurred was that too many loans were being made to people that had no ability of paying their debt back. We see this trend in full stride once again in the auto industry. Subprime auto lending is back in a big way. Why is this happening? What are its repercussions? This article explains. END_OF_DOCUMENT_TOKEN_TO_BE_REPLACED

Share
Previous Here’s the REAL Reason Behind Current Stock Market Volatility (+3K Views)
Next Noonan: “When Will Gold & Silver Rally? NOT In 2015! Here’s Why”