During the credit crisis, one of the problems that occurred was that too many loans

were being made to people that had no ability of paying their debt back. We see this trend in full stride once again in the auto industry. Subprime auto lending is back in a big way. [Why is this happening? What are its repercussions? This article explains.]

The above introductory comments are edited excerpts from an article* by mybudget360.com entitled Driving our way into poverty: Subprime auto debt continues to expand while domestic auto production remains weak.

…[Given that] the per capita wage in the country is approximately $26,000…[and] the average new car costs $30,000 most people need to go into debt to finance this purchase, we are now seeing a big wave of subprime borrowers purchasing cars. What can possibly go wrong?

…We are seeing a healthy number of new loans going to those with lower credit scores which ironically favor those who take on more credit lines yet manage them well. Sort of like giving a gambler a line and asking him not to use it in Vegas. Of course, the credit crisis was brought on by crony finance and this is once again rearing its ugly head.

Take a look at the growth in subprime auto debt: 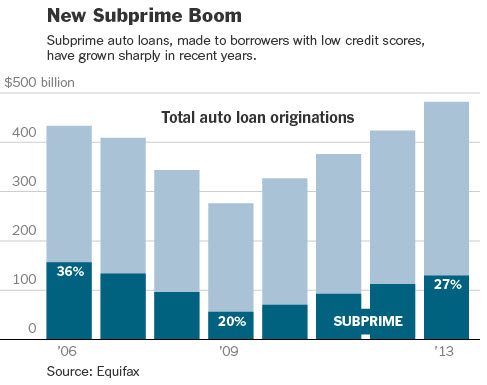 At the peak of the credit mania, 36% of auto loans were going to subprime borrowers. In 2009 when we were washing away the years of malfeasance and financial leverage, we saw 20% of auto loans falling in the subprime category. Slowly but surely we are now back to 27% of the pool and total originations are back to record levels.

What is interesting is that sales are not as high as they once were yet total loan volume is at a record: 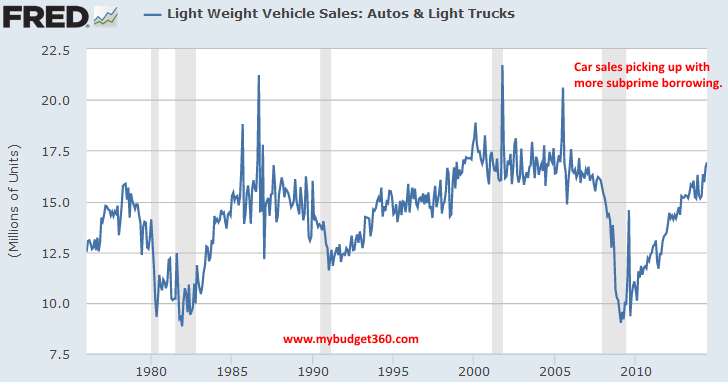 At the peak, we were nicely hovering above 17.5 million auto sales per year. This last month, we hit 16.9 million, and this was for one month of data versus a consistent trend, so why more debt for fewer cars being sold? Do you remember our friend inflation?

Domestic Car Production Down From Peak

What is even more telling about our economy is how many cars are being produced domestically: 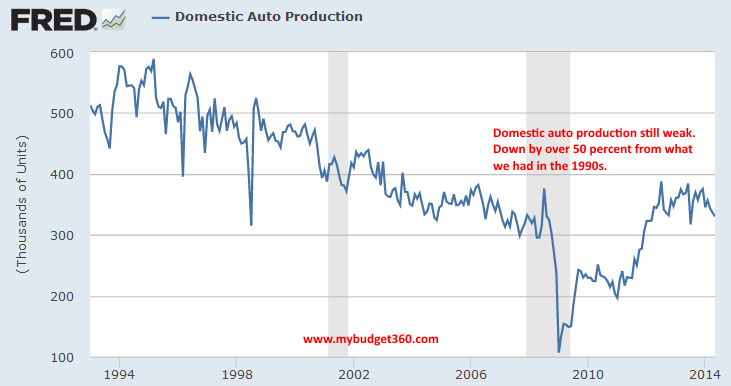 We are producing 50% fewer cars in the U.S. than we did in the 1990s yet we are consuming the same amount of cars…

We are already seeing some of these problems hit as money and inflation from abroad comes rushing back in.

One of the most glaring stats above is the one regarding domestic auto production and our annual consumption of cars. There is a price to pay when your consumption and production is out of balance.

Share
Previous Only A Matter Of Time Before Eurozone Debt Crisis Re-erupts – Big time! Here’s Why
Next Don’t Worry About the Future Price of Gold – China’s Got Your Back! Here’s Why