We Can Now Rule Out Another Housing Collapse, Can't We?

Lorimer Wilson August 30, 2011 Comments Off on We Can Now Rule Out Another Housing Collapse, Can't We? 2,527 Views

past 2 years after having fallen by a third from their 2006/7 highs. [That being said, surely we can now rule out another collapse, can’t we? Words: 764

So says Scott Grannis, the Calafia Beach Pundit, (scottgrannis.blogspot.com) in an article* which Lorimer Wilson, editor of www.munKNEE.com (It’s all about Money!), has further edited ([  ]), abridged (…) and reformatted below  for the sake of clarity and brevity to ensure a fast and easy read. Please note that this paragraph must be included in any article re-posting to avoid copyright infringement. Grannis goes on to say in the article: 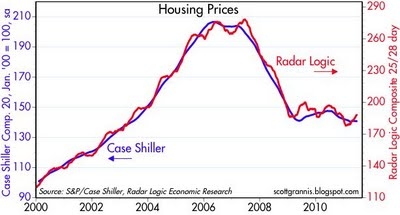 This next chart shows the Case Shiller index of 10 major markets, with data going back to 1987 and adjusted for inflation. Here we see that prices have fallen some 38% from their 2006 highs and have lost a bit of ground in the past two years. 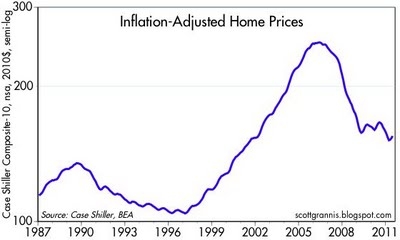 Considering that mortgage rates are now at all-time lows (down by about one-third from the levels that prevailed in 2006-07), the effective cost of buying a house in the nation’s large cities has plunged by almost 60% in the past five years.

Taking into consideration that real median family incomes have been generally rising, while mortgage rates and housing prices have fallen significantly, houses have never been more affordable than they are today, as reflected in the chart below. (The most recent datapoint signifies that a family earning the median income has 176% of the amount needed to purchase a median-price resale home using conventional financing.) 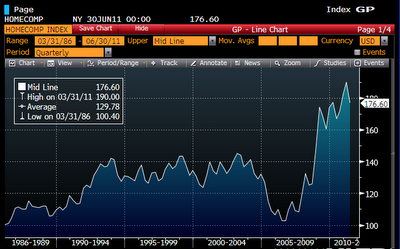 The housing market has undergone the most painful and wrenching adjustment imaginable. Prices fell by an order of magnitude early in the crisis but have managed to hold relatively steady for two years. The excess inventory of housing is declining daily, since new home construction today is only a fraction of the levels that have prevailed for many decades, and less than what would be needed to keep pace with new household formations.

Perhaps the rebound in housing will take longer than many, including myself, have expected, but surely by now we can rule out another collapse, can’t we? The next surprise in the housing market is likely to be a growth and rising price story, rather than another tragedy.

1. Forecast for House Prices is Horrific! Here’s Why

As bad as the housing crisis has been over the past three years, it has only been a warm up to what we have headed our way… [In fact,] the forecast is horrific, to say the least!28% of US homeowners already owe more on their mortgage than their home is worth [and]… 27% of American homeowners are considering walking away from their mortgage…This is going to significantly drive home prices further down. [Let’s look at the details.] Words: 657

2. What Caused the Financial Crisis? 3% Down Mortgages or Wall Street Greed?

3%! Simply amazing. 3% isn’t even close to serious. If you are only able or willing to put down 3% you simply aren’t serious about homeownership. It’s laughable…yet by 2007 40% of all mortgages had less than 3% downpayments…Evidence is now pouring in…that the financial crisis of 2008 was nearly exclusively created by government’s misguided interventions and manipulations of the housing market. [Let me explain further.] Words: 671

Yes, you read that right; get ready for the next housing boom. You’re probably thinking, “How could that be with all the mortgage delinquencies and foreclosures going on, and the record levels of housing inventory? Well, it’s not going to happen soon – [probably] not for several more years – but it’s coming. [Let me explain to you why it is inevitable.] Words: 589

The rat-through-the-snake process of working down existing and prospective distressed properties is likely far from over, and how that process plays out will no doubt have an impact on how much housing prices will ultimately adjust. [Let’s take a look at some differing points of view in that regard.] Words: 497

Share
Previous Roubini, Schiff, Rosenberg and Whitney Agree: Another Recession Is At Hand! Here’s Why (+2K Views)
Next Can Such a High Price for Gold Be Justified? (+2K Views)