Uncanny Relationship with Nikkei & 1929 Crash Suggests S&P 500 About to Top Out – and Then Tumble!

So says Lorimer Wilson, editor of www.munKNEE.com. Please note that this paragraph must be included in any article reposting.

Wilson goes on to say:

Market strategists Sadiq Currimbhoy, Arik Reiss, and Jacky Tang of Bank of America Merrill Lynch Asia identified a pattern* back in 2009 that supports the likelihood of additional gains in the S&P 500 regardless of the extent of the extent of the economic recovery in the U.S.. The analysts plotted the S&P 500 in DXY terms against the Nikkei by rebasing the S&P 500 to the same peak as the Nikkei but lagged by 117 months (i.e. 9.75 years) and uncovered an uncanny relationship as shown in the chart below. 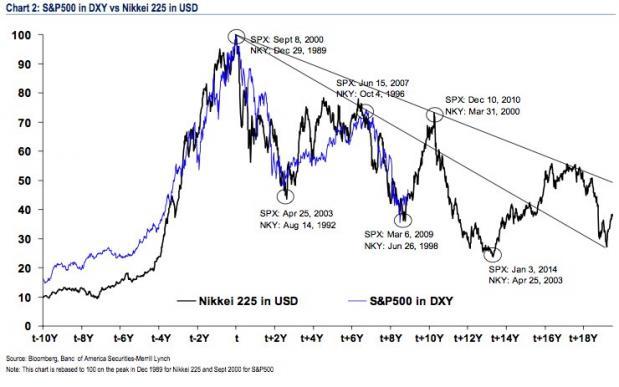 Their analysis suggested that the S&P peak would be achieved by December 10th of last year but that obviously was not the case. Failing to achieve such a precise projection can be excused so the realization of such a target in the first half of 2011 should be deemed acceptable.

The Merrill Lynch strategists went further, constructing an equally-weighted index of all markets that have crashed more than 45% since 1970 plus the U.S. stock market crash in 1930 and then averaged the recoveries from these crashes (referred to as ‘Historical Peak-Trough Index’).

When the Historical Peak-Trough Index was compared to markets that have recently experienced similar deterioration (referred to as ‘Current Peak-Trough Index’) they concluded that the current S&P 500 index looks like it’s following a similar pattern that would have the S&P 500 topping out at somewhere around 1400-1500 (i.e. 5-10% less than the S&P 500’s record high of 1565 in October 2007) before crashing back to it’s 1994 low of 400 (when the stock market bubble first began) by the end of 2013 or early 2014.

The Merrill Lynch Asia strategists maintained that the rally in the S&P 500 would likely be triggered by central bankers keeping interest rates low (they have), an economic recovery (slowly underway) and/or an undervalued dollar (which has turned out to be the case). Their analysis bears scrutiny and ongoing review for us to successfully navigate these troubled economic/financial/investment waters.

Share
Previous Confessions Of A Conservative Investor With Anything But “Conservative” Investments (3K Views)
Next The Most Watched VIDEO in 2011: Will It Be Cash or Gold Bullion?