The U.S. dollar is essentially at an all-time low against other currencies on both a real and nominal basis [and such a] weak dollar is a serious problem, but there is no reason yet to abandon all hope… [Let me explain.] Words: 1062

So says  Scott Grannis, the Calafia Beach Pundit,  (http://scottgrannis.blogspot.com/) in an article* which Lorimer Wilson, editor of www.munKNEE.com, has further edited ([  ]), abridged (…) and reformatted below for the sake of clarity and brevity to ensure a fast and easy read. (Please note that this paragraph must be included in any article re-posting to avoid copyright infringement.) Grannis goes on to say:

Why the Dollar is Weaker

The dollar’s extreme weakness [as shown in the 2 charts below] reflects a combination of factors: 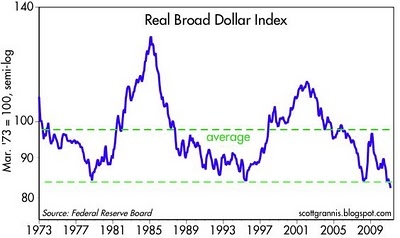 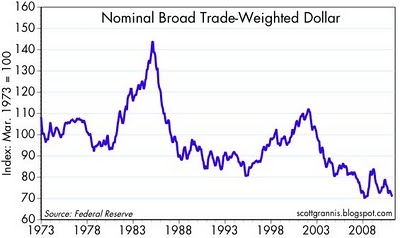 The dollar’s extreme weakness is a problem in itself, since it:

Measured inflation has been relatively tame, so far. Headline inflation is beginning to pick up, but the Fed argues this is being driven mainly by food, energy and commodity prices, and central banks should not try to control those naturally volatile prices. They further argue that the large degree of “slack” in the U.S. economy creates a powerful deflationary effect on the general price level. They focus on “core” prices, in the belief that food and energy prices will eventually track core prices, and the heating-up of inflation that we see in the PPI and the headline CPI will subside with time.

There is no evidence, to date, of any unusual increase in the various measures of the U.S. money supply that might support a significant rise in inflation, and to date there has been no significant decline in the demand for money that might also support a higher and rising price level. Quantitative easing looks and feels very inflationary, but so far nothing much has happened—except for the very weak dollar. Almost all of the Fed’s massive injection of bank reserves has been willingly held by a public that apparently still craves the safety and liquidity of those T-bill equivalents. At the end of the day, [however,] the significant decline in the dollar’s value is prima facie evidence of an excess supply of dollars relative to the demand for dollars, and that is how inflation gets started.

How to Keep Inflation at Bay

U.S. monetary and fiscal policy levers have been in max-stimulus mode for quite some time, yet the only obvious result has been a weaker dollar and a struggling economy. This is not surprising to non-Keynesian economists, of course. Supply-side and classical economists know that you can’t create growth via the printing press; too much money only reduces confidence and increases speculation, to the detriment of genuine investment. Furthermore, increased government spending only wastes resources that could be put to better use by the private sector, and income redistribution schemes only create perverse incentives (rewarding those who don’t work and penalizing those who do). This leads to the conclusion that we need less “stimulus” if we want to really stimulate the economy. Monetary policy needs to demonstrate a deeply held conviction to preserve the purchasing power of the dollar—to give the value of the dollar precedent over the state of the economy. Bernanke and his fellow Fed governors all profess to believe this, but their actions leave much to be desired.

I think it is premature to conclude that the only possible outcome of QE2 is a dollar meltdown, which in turn would lead us to the “end of the world as we know it.” There has been no unusual expansion in any of the common measures of the dollar money supply, so any actions that increase the world’s demand for dollars could go a long way to fixing the relative over-supply of dollars that is depressing the dollar’s value. For example: to quickly boost the demand for dollars, Congress could adopt a new and healthier fiscal policy; and the Fed could embark on a sooner-than-expected tightening of monetary policy. Plus, if the economy continues to improve, as I think it is, this would also boost dollar demand by increasing confidence in the future.

Fiscal policy needs to shrink the size of government by spending less and redistributing less, thereby freeing up resources that can be better utilized by the private sector and creating better incentives to work and invest. Paul Ryan’s proposal goes a long way toward accomplishing this, and even if Congress does not embrace it I think fiscal policy is now headed in the right direction.

The weak dollar is a serious problem, but there is no reason yet to abandon all hope.