Back in 2009 I began keeping track of those financial analysts, economists, academics and commentators

who were of the opinion that it was just a matter of time before gold reached a parabolic peak price well in excess of the prevailing price. As time passed the list grew dramatically and at last count numbered 140 such individuals who have gone on record as saying that gold will go to at least $3,000 – and as high as $20,000 – before the gold bubble finally pops. Of more immediate interest, however, is that 8 of those individuals believe gold will reach its parabolic peak price in the next 12 months – even as early as February, 2012. This article identifies those 8 and outlines their rationale for reaching their individual price expectations. Words: 1450

So says Lorimer Wilson, editor of www.munKNEE.com (Your Key to Making Money!) and www.FinancialArticleSummariesToday.com (A site for sore eyes and inquisitive minds) in an article written on behalf of www.PreciousMetalsWarrants.com (The Authority on Warrants). Please note that this paragraph must be included in any article reposting with a link* to the article source to avoid copyright infringement.

Wilson goes on to report:

“No wishful thinking here! As I see it gold is going to a parabolic top of $10,000 by 2012 for very good reasons: sovereign debt defaults, bankruptcies of “too big to fail” banks and other financial entities, currency inflation and devaluations – which will all contribute to rampant price inflation.”

Bock wrote another article in March, 2011 entitled Get Ready for Financial Crisis 2.0 in 2012 – It’s Inevitable! Here’s Why in which he expanded on his observations of the economic climate by saying in his opening comments:

“2012 is shaping up to be the blockbuster main event of the ongoing financial crisis. Massive amounts of new debt, vast quantities of additional digital dollars and the spark of higher interest rates will set off version 2.0 of the credit-driven financial implosion.”

In Stansberry’s December 2009 article entitled This Little-Known Rule Could Send Gold to $10,000 he wrote:

” [Back in 1999] two well-known economists – Alan Greenspan and Pablo Guidotti – published a secret formula in a 1999 academic paper. The formula is called the Greenspan-Guidotti rule. The rule states: To avoid a default, countries should maintain hard currency reserves equal to at least 100% of their short-term foreign debt maturities. The world’s largest money-management firm, PIMCO, explains the rule this way: ‘The minimum benchmark of reserves equal to at least 100% of short-term external debt is known as the Greenspan-Guidotti rule. Greenspan-Guidotti is perhaps the single concept of reserve adequacy that has the most adherents and empirical support.’

The principle behind the rule is simple. If you can’t pay off all of your foreign debts in the next 12 months, you’re a terrible credit risk. Speculators are going to target your bonds and your currency, making it impossible to refinance your debts. A default is assured.

Greenspan-Guidotti means the U.S. is likely to have a severe currency crisis within the next two years. How high will gold go during this crisis? Nobody can say for sure. We’ve never been in the situation we are now. The numbers have never been so large and dangerous but I wouldn’t be surprised at all to see gold at $10,000 an ounce by 2012. Make sure you own some.”

“Our target for Gold since October 2010 has been US$6000 by December 2012… thru Q2 2013… Excess money printing will cause debasing of the mighty US Dollar. In this scenario of hyperinflation, wherein the…US Dollar is collapsing, the only way to protect your wealth is holding on to ‘Physical Gold’. Please start thinking on the lines of “wealth protection” and “preservation”. Physical Gold is the only financial asset in the world that is not simultaneously somebody else’s liability. That is the reason why we have been advising everyone since 2009 to buy ‘physical Gold’ [and recommending that they] store the bars outside the commercial banking system as most commercial banks in USA and Europe will be “insolvent” by December 2012. We repeat – Physical Gold is the only asset which will give “best returns” from 2009 through 2012.”

Goldrunner uses fractal analysis off the gold bull market of the 1970s to arrive at his assessment of where gold is now in the bull run and where it is going. In his November, 2011 article he set forth the basics of his technical analysis and said:

In Chapman’s August, 2011 issue of the International Forecaster he had this to say about gold:

“Debt monetization will lead to ever-higher inflation…and explain the systemic problem of many nations, which have nowhere to turn to except the creation of money and credit to temporarily keep their economies going…[and] when you put it all together you get higher gold and silver prices…We would expect a move to $2,000 to $2,200, some backing and filling and a move to $2,500 to $3,000 by the end of February 2012, as we earlier predicted.”

Ian McAvity, author of the newsletter, Deliberations on World Markets, speaking on Mineweb.com’s Gold Weekly podcast in June of 2010, said that while he is a gold bug, buying gold in the current economic climate is very much like buying life insurance for a short term capital gain. McAvity says that he expects gold to head north toward the $3,000 level over the next two years [i.e. sometime in 2012] but, says he cannot yet quantify “the magnitude of the crisis that takes it higher”. According to McAvity, one of the most critical factors for the gold price currently is the return on risk-free capital which is currently negative in real terms saying:

“As long as the yield on treasury bills is 40 to 50 basis points, then the perceived inflation rate is 200 to 300 basis points – basically holding paper is negative. And that is one of the strongest underlying features of the gold market and we basically have the central bankers and their quantitative easing load saying that they’re going to try and keep interest rates as close to zero as possible, until they successfully borrow their way out of debt. The concept of borrowing your way out of debt is I guess, the new math that I haven’t quite grasped yet.”

In an August 2011 article posted at Seeking Alpha entitled How to Play Parabolic Gold Prices With a $2,500-8,000 Target Hemmerling says:

“While I put a one year price target of $2,500 – $3,000, it is difficult to know with any surety…but I think some added ‘shock news’ as we toy with another recession and the convoluted problems of the euro-zone, compounded by inflationary stimulus – will see the U.S. dollar-based price of gold go much higher over the next few months. My target is largely based on the recent steep climb that is getting dangerously close to setting up a parabolic price move. Fear is the catalyst, and I think resistance will be met at $2,000 based on it being a round psychological number. After some churning when it breaks that – we could see another big run between $2,500 and $3,000.”

In the April 2010 issue of The Aden Forecast the Aden sisters expressed their view that:

“[In the chart below] you can see an interesting pattern that’s been going on since 1969. Note that each major eight year low was followed by a major peak 11 years later. The only exception was the 1993 low, but in that case the low was mild within an essentially quiet market (see asterisk). 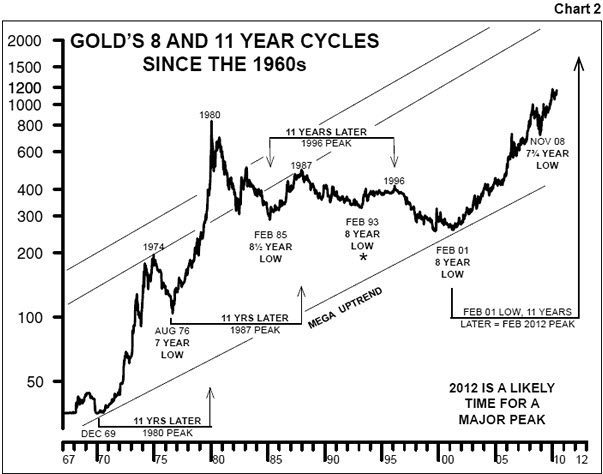 In their latest (November 2011) forecast they were still optimistic saying “gold is near a normal high area within a major uptrend, but it has yet to experience any type of explosive action. This is likely still to come once this current period of weakness is over.”

It should be noted here that the leverage of gold mining shares vis-a-vis the price performance of gold bullion plus the added leverage of the warrants of such companies vis-a-vis the performance of their associated stock supports the possibility of amazing gains for the right warrants of the right junior miners in the years ahead. For the implications that the Adens’ forecast would have on the prospects for long-term warrants please read this article.

Out of the 140 analysts who are on record as stating that gold will eventually undergo a parabolic move in price to $3,000 and beyond (see here) only the above 8 analysts have made specific price projections for 2012. If I am mistaken and there are others please do not hesitate to send me an email with the article URL to [email protected].

If you enjoyed reading the above article then please: