These 14 Countries Make Up 93.5% of World’s Proven Oil Reserves

…The world derives over a third of its total energy production from oil, more than any other source by far. As a result, the countries that control the world’s oil reserves often have disproportionate geopolitical and economic power…[and,] according to the BP Statistical Review of World Energy 2020, 14 countries make up 93.5% of the proven oil reserves globally…Here are the 14 countries with at least a 1% share of global proven oil reserves: 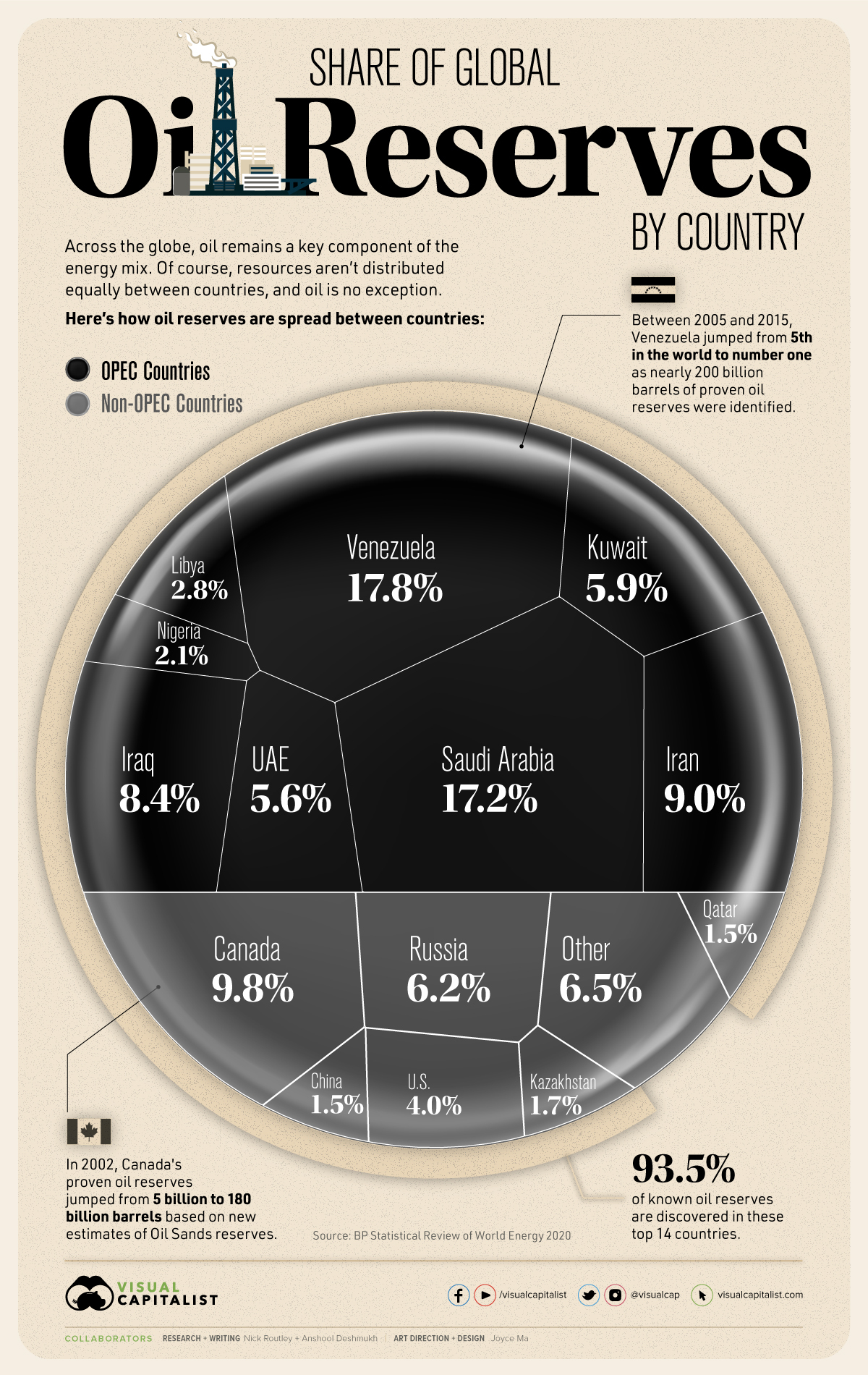 Venezuela has long been an oil-producing country with heavy economic reliance on oil exports. However, in 2011, Venezuela’s energy and oil ministry announced an unprecedented increase in proven oil reserves as oil sands in the Orinoco Belt territory were certified…[and is now] the number…[country in] proven oil reserves…

The majority of countries with the largest oil reserves in the world are the 14 members of OPEC…[and they hold] nearly 70% of crude oil reserves worldwide.

…In the past three decades the Middle East share of global oil reserves has dropped, from over 60% in 1992 to about 48% in 2019…[as a result of] constant oil production and greater reserves discovered in the Americas. By 2012, Central and South America’s share had more than doubled and has remained just under 20% in the years since.

…As the world shifts away from oil consumption and towards green energy and electrification, these reserves might not matter as much in the future as they once did.

Editor’s Note:  The original article by Anshool Deshmukh has been edited ([ ]) and abridged (…) above for the sake of clarity and brevity to ensure a fast and easy read.  The author’s views and conclusions are unaltered and no personal comments have been included to maintain the integrity of the original article.  Furthermore, the views, conclusions and any recommendations offered in this article are not to be construed as an endorsement of such by the editor. Also note that this complete paragraph must be included in any re-posting to avoid copyright infringement.

Related Articles From the munKNEE Vault

1. 10 Questions You Need Answers to Before Investing in Oil & Gas Stocks (+2K Views)

2. More of What You Need to Know Before Investing in Oil & Gas Stocks (+2K Views)

The carbon footprint left by Canada’s oil sands has been a target of criticism for years with many environmentalists suggesting that the extraction and processing of bitumen from Alberta’s northern oil sands is “two to three times worse” for the environment than any other supply of oil on the planet. Is that legitimate criticism? Words: 692

Some people arbitrarily speak about oil as if it is a single, indistinguishably homogenous substance without any unique differentiation, but this is actually not the case at all! In fact, there are many different kinds of oil. Words: 1007

5. Why & How Oil Prices Fluctuate