The Stock Market Party Is Finally Ending – Here’s Why

Lorimer Wilson February 10, 2015 Comments Off on The Stock Market Party Is Finally Ending – Here’s Why 2,179 Views

Even though the overall U.S. economy continues to be

deeply troubled, we have seen the Dow, the S&P 500 and the Nasdaq set record after record  but no bull market lasts forever – particularly one that has no relation to economic reality whatsoever – and the cold, hard facts are telling us that this party is about to end.  The following are 7 signs that a stock market peak is happening right now.

Excerpts from an article* by Michael Snyder (theeconomiccollapseblog.com) originally entitled 7 Signs That A Stock Market Peak Is Happening Right Now.

#1 Just before a stock market crash, price/earnings ratios tend to spike, and that is precisely what we are witnessing.

The following commentary and chart come from Lance Roberts:”The chart below shows Dr. Robert Shiller’s cyclically adjusted P/E ratio. The problem is that current valuations only appear cheap when compared to the peak in 2000. In order to put valuations into perspective, I have capped P/E’s at 30x trailing earnings. The dashed orange line measures 23x earnings which has been the level where secular bull markets have previously ended. I have noted the peak valuations in periods that have exceeded that 30x earnings. 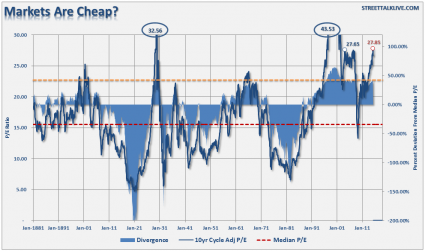 At 27.85x current earning the markets are currently at valuation levels where previous bull markets have ended rather than continued. Furthermore, the markets have exceeded the pre-financial crisis peak of 27.65x earnings. If earnings continue to deteriorate, market valuations could rise rapidly even if prices remain stagnant.

#2 The average bull market lasts for approximately 3.8 years. The current bull market has already lasted for 6 years. [Read: Will End of 6-year Run in Stocks Be Any Different This Time Round?]

#5 In the past, peaks in margin debt have been very closely associated with stock market peaks.  The following chart comes from Doug Short.

#6 We usually witness a spike in 10 year Treasury yields just about the time that the stock market is peaking right before a crash and…we just saw the largest 5 week rate rally in two decades.

#7 A lot of momentum indicators seem to be telling us that we are rapidly approaching a turning point for stocks.  For example, James Stack, the editor of InvesTech Research, says that the Coppock Guide (a momentum indicator which serves as “a barometer of the market’s emotional state, tracking the ebb and flow of equity markets from one psychological extreme to another,” is warning us of “an impending bear market on the not-too-distant horizon”…

If we are to see a stock market crash soon, when will it happen? Well, the truth is that nobody knows for certain. It could happen this week, or it could be six months from now but, without a doubt, lots of economic warning signs are starting to pop up.

One that is particularly troubling is the decline in new orders for consumer goods.  This is something that Charles Hugh-Smith pointed out in one of his recent articles in which he conveyed that, [inspite of rosy financial news (record trade surpluses in China, positive surprises in Europe, the best run of new jobs added to the U.S. economy since the go-go 1990s, and the gift that keeps on giving to consumers everywhere, low oil prices) new orders are cratering. New orders are a snapshot of future demand, as opposed to current retail sales or orders that have been delivered.

Posted below is a chart that he included with his recent article.  As you can see, the only time things have been worse in recent decades was during the depths of the last financial crisis. 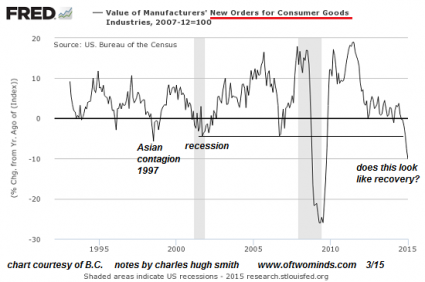 To me, it very much appears that time is running out for this bubble of false prosperity that we have been living in.

[The above article is presented by  Lorimer Wilson, editor of  www.munKNEE.com and has been edited ([ ]), abridged (…) and/or reformatted (some sub-titles and bold/italics emphases) for the sake of clarity and brevity to ensure a fast and easy read. The author’s views and conclusions are unaltered and no personal comments have been included to maintain the integrity of the original article.

1. Will End of 6-year Run in Stocks Be Any Different This Time Round?

2. Is This the Beginning of the Stock Market Crash So Many Analysts Have Forecast?

For months numerous articles have been posted on this site substantiating why a stock market collapse of epic proportions is in the cards to happen soon. The basis for such a conclusion are based on a diverse perspective that warrants your attention. With your money on the line – your future quality of life at risk – here is your opportunity to be forewarned and do something about it. END_OF_DOCUMENT_TOKEN_TO_BE_REPLACED