Lorimer Wilson January 4, 2018 Comments Off on The Fundamentals Point To A GREAT DELEVERAGING Of The Economy – Dead Ahead 2,032 Views

Enjoy the good times while you can because when the

economy BLOWS UP this next time, there is no plan B.  Sure, we could see massive monetary printing by Central Banks to continue the madness a bit longer after the market crashes, but this won’t be a long-term solution.  Rather, the U.S. and global economies will contract to a level we have never experienced before.  We are most certainly in unchartered territory… the GRAND FACADE will come crashing down to the shock and surprise of the masses. Here is my analysis and the reasons why we are heading towards a cliff.

The original article has been edited for length (…) and clarity ([ ]) by munKNEE.com to provide a fast & easy read. For all the latest – and best – financial articles sign up (in the top right corner) for your free bi-weekly Market Intelligence Report newsletter (see sample here) or visit our Facebook page.

While the mainstream media and financial networks suggest that THIS TIME IS DIFFERENT for the markets, it isn’t.  The fundamentals of the markets are so out-of-whack, I am amazed people can’t see it.

Let’s first look at the NYSE margin debt.  According to the chart by the Advisor Perspectives, the New York Stock Exchange margin debt is at new record high: 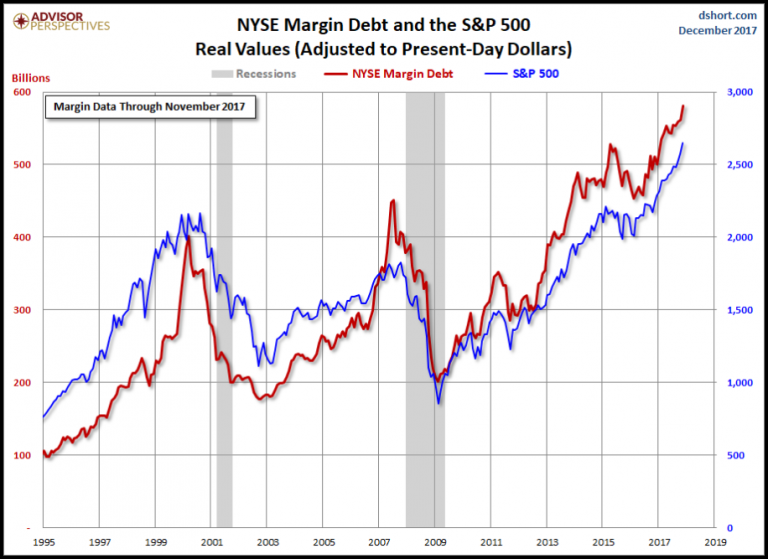 If we look at the 1999 and 2007 NYSE margin debt graph lines (RED), we can spot a huge spike right before they both peaked.  If this is the way it will happen in the current trend, then we will likely see a huge spike and stock market MELT-UP before it peaks and collapses, you know, the last chance for the really stupid traders to get SUCKED in.

As the NYSE margin debt reaches new record territory, so has the VIX Index and the stock market.  Yesterday, the VIX Index (measures volatility in the markets) closed at a new record low of “9”, while the Dow Jones Index ended the day at a record high of 24,922 points: 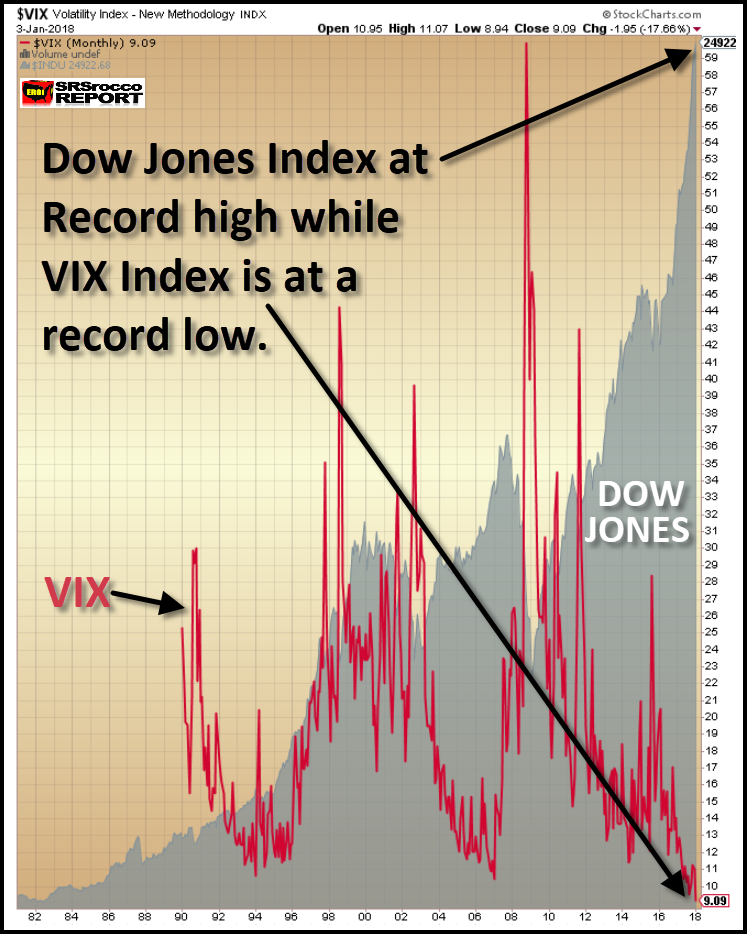 Today, the Dow Jones Index has reached another record at 25,100.  Just like the cryptocurrency market, the only direction is HIGHER.  Who knows how low the VIX Index will go and how high the Dow Jones will reach, but my gut tells me that this will be the year that the fun finally ends.

Of course, if we have new record highs in the stock markets, we should see the same with the U.S. Retirement Market: 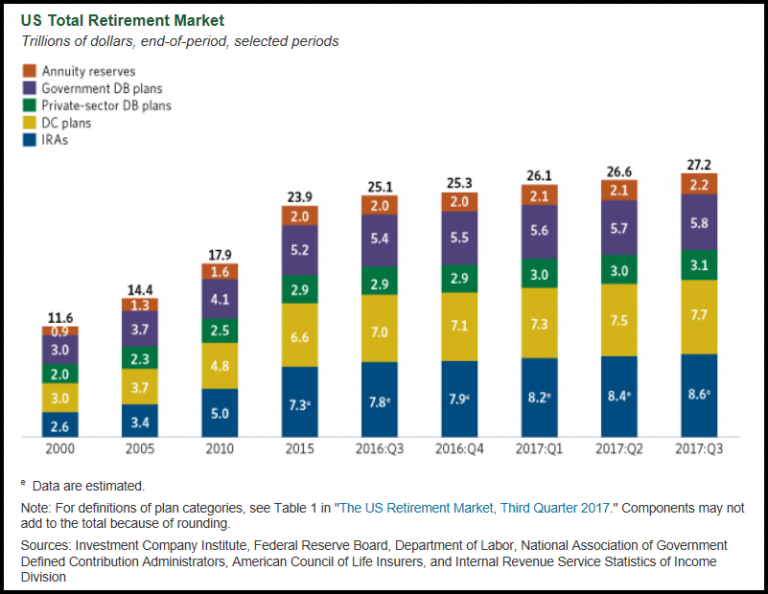 When Americans feel rich via their investments, it makes them also feel good about buying more crap they don’t really need or can afford. You see, frugality has been totally erased from Americans’ mindset… If frugality were reintroduced to Americans, then the entire economy would collapse overnight.  Why?  Because, the U.S. economic model is based on buying as much as we can on debt and credit.  If we moved back to being frugal or buying only with cash, then 95-98% of the U.S. economy would disintegrate…

The value of stocks, bonds, and real estate have been wildly inflated due to Central Bank money printing and the tremendous increase in debt.  If an individual stayed awake during their economic classes in high school or college, NET WORTH comes from subtracting DEBTS from ASSETS.  However, today, we don’t worry about the debts.  We only look at the assets.  This is like eating all the junk food during the holidays and not worrying about the way it comes out the other end.

Americans have deluded themselves into believing that [the] crap that is put on our dinner plate is good for us so why should we blame them if they forget about debts and only look at assets?  It makes perfect sense when LIES and FRAUDULENT activity are the predominant ideology in society.

If we look at the current oil price chart, it seems as if it is heading back towards $65 (200-month moving average–BLUE LINE) and then up to $100: 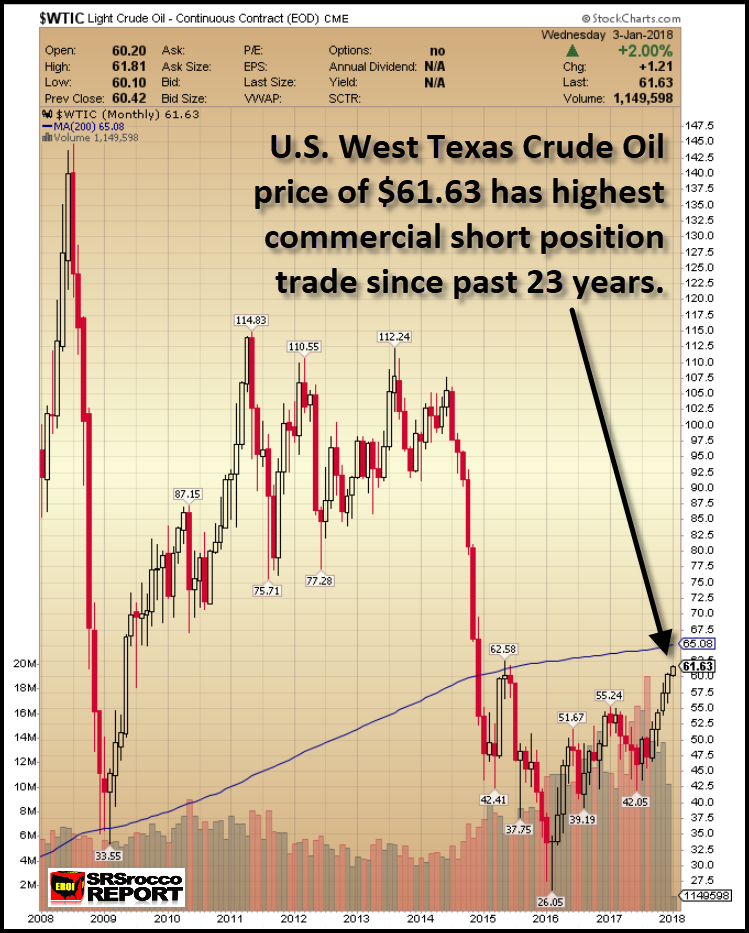 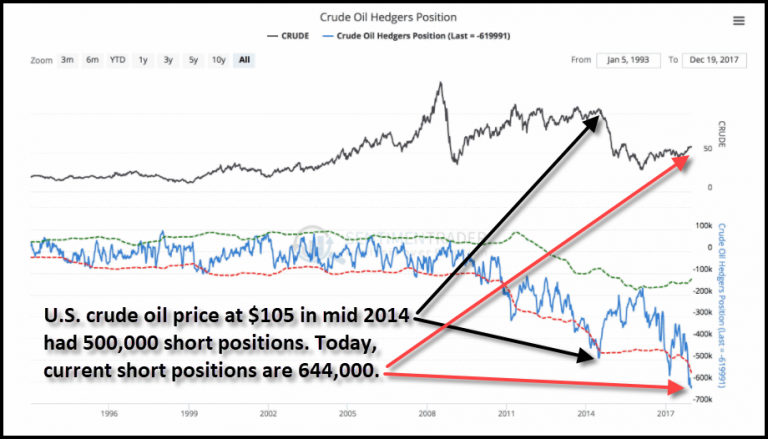 Now, the interesting part of the equation is this; will the oil price fall when the markets crack, or before?  Regardless, if we look at all the indicators (VIX Index record low, Stock Market Record High, NYSE margin debt record high or commercial short positions on oil at a record high), we can plainly see that the LEVERAGE is getting out of hand. These indicators and others give me the impression that the economy and markets are going to BLOW UP in 2018. 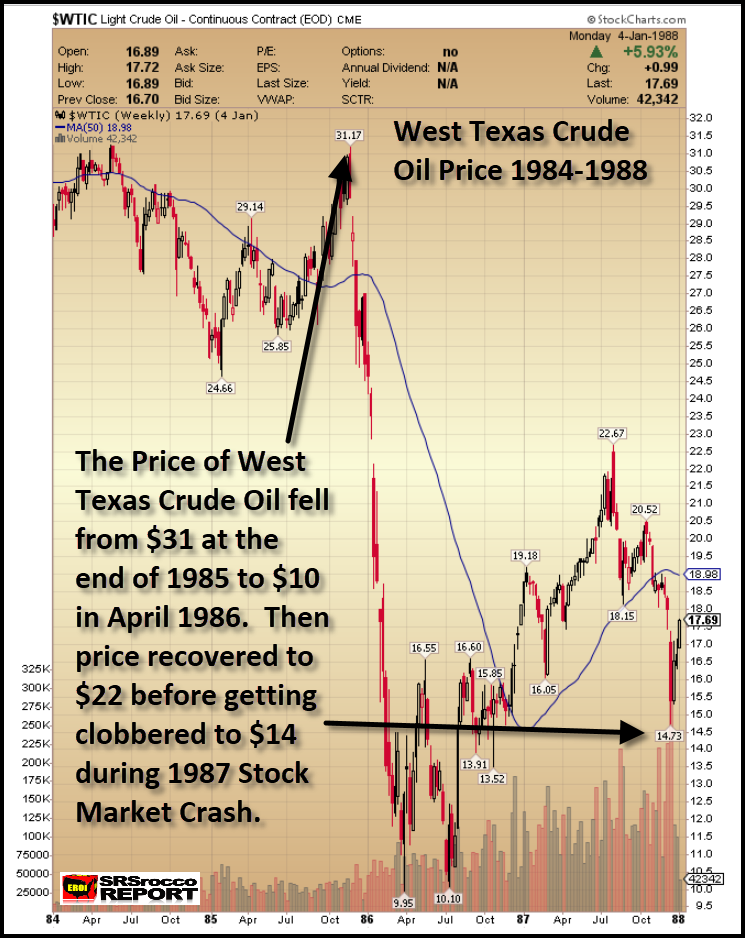 Either way, the indicators are pointing to one hell of a deleveraging of the markets.  Investors need to understand when the oil price heads south once again; it will likely be the death-knell for the already weak U.S. Shale Oil Industry.  We must remember, when the markets were collapsing in 2008, the U.S. oil industry was still in relatively good shape.  Today, most of the shale companies have debt up to their eyeballs.  Once again, here is the chart of the coming ENERGY DEBT WALL: 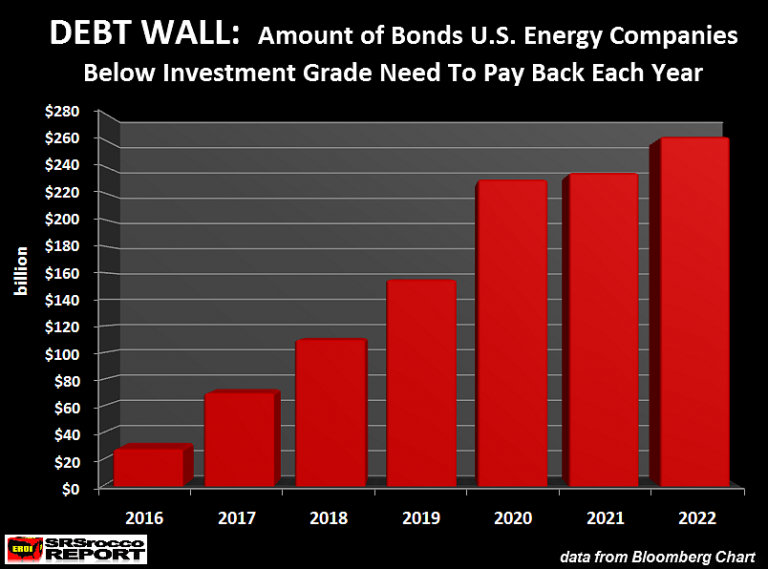 …To tell you the truth, when the markets finally crack, and the real carnage rips through the U.S. economy, we only have ourselves to blame.  There are no pointing fingers when we are all involved…

In conclusion, the U.S. and world economies are heading towards one heck of a crash.  What happens when this occurs, it’s anyone’s guess.  Likely, the Central Banks will step in with their magic and print money like crazy.  However, this is not a long-term solution.  If you haven’t bought some physical gold and silver insurance yet and are waiting to time the markets, GOOD LUCK WITH THAT…

[button color=”red” size=”small” link=”http://” ]Scroll to very bottom of page & add your comments on this article. We want to share what you have to say![/button]

Share
Previous 4 MedTech Stocks Set To Explode (+2K Views)
Next Gold: 8-yr Cycle About To Start – Next 5 Years Will Likely Be Good Ones (+2K Views)