Where are Gold & Equities in the 3 Phases of Bull & Bear Markets? (+2K Views)

Have you ever thought about when to get into an investment and when to get out? Nearly all bull and bear markets have three distinct phases, and if you learn to recognize them you will significantly increase your chances of getting in while the market still has room to go up, and getting out before the bull market is over and people start to sell en masse. Words: 1200

So says Robert Hallberg (www.contrarian-investor.com) in edited excerpts from the original* article:

Lorimer Wilson, editor of  www.munKNEE.com (Your Key to Making Money!) has further edited ([ ]), abridged (…) and reformatted (some sub-titles and bold/italics emphases) the article below for the sake of clarity and brevity to ensure a fast and easy read. The author’s views and conclusions are unaltered and no personal comments have been included to maintain the integrity of the original article. Please note that this paragraph must be included in any article re-posting to avoid copyright infringement.

Bull and bear markets almost always repeat in a similar pattern and people’s behavior is all too predictable. A new bull market typically starts with a gradual rise in prices of an investment class that no one has wanted to own for a long time, and consequently the price is very low. Then it slowly starts going up, but peoples attitude still remain negative. After a lengthy bull market with steadily increasing prices, people start noticing the new asset and it gets more and more media coverage. The institutional players buy into this new market and prices continues to rise. Finally, after the price has gone up many times over the public wants in on the price action. The price keeps rising faster and faster and a sense of euphoria starts to set in among investors. Then shortly thereafter, the price starts to fall, and people realize some time later that they bought near the peak of the market and it is now well on the way down.

Have you ever gotten caught buying at a top of a bull market, whether its stocks, real estate or commodities? If so, then congratulations, you have taken one of the first steps in the education process of becoming an informed investor. Now the second step is to see how bull and bear markets actually work, and this time you can be in control and get in front of the market, rather than to let it run all over you.

Bull and bear markets typically have three distinct phases, and we will investigate theses phases in this article. By understanding the behavior of these phases you will be able to following along as the bull market progresses. You will get much more control over the timing of your investments, and be able to get out before the top. 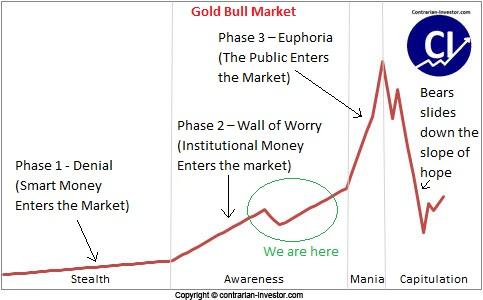 Phase 1 – Denial. The first phase in a bull market begins as its last bear market is ending. After a long-lasting bear market hardly anyone is even interested in the investment class, and almost no one is thinking of watching for a bottom. The asset class has been dismissed as a poor investment long ago and there is very little interest left. The stock market of the early 1980’s is a good example of this. The sentiment at the time was very different, and the market had gone nowhere for more than 16 years. The market zigged and zagged, and no one was even considering the “buy and hold” strategy as a viable option as the bear market finally ended. People had been burnt over and over again, and nearly all of the investment public had thrown in the towel. So, once the final bottom had been formed, market participants remained highly skeptical, and tended to stay away from the market even as prices continued to rise. Only the so called “smart money” participated in this in this early phase of the bull market.

Phase 2 – Climbing a Wall of Worry. The second phase of a bull market is when the general investing publish becomes aware of this new market that is continuing to move higher. This is usually the longest lasting phase of a bull market and it’s characterized by higher volatility. During this phase, the media starts to cover this new sector and you start seeing experts being interviewed on television. Still, uncertainty remains the theme of the day and most of the investment public finds it hard to take action. They see the prices rise, but in the back of their mind they still remember the last painful bear market and many consider the asset class too risky.

Despite increasing media coverage, people are skeptical and the naysayers are dominating the airwaves. Only after many years of out outperformance in the sector does the sentiment start to change and the market participants start to feel good about the investment they have made. After a long period of strong performance people starts to forget about the last bear market, and with a new optimistic attitude the moods becomes more positive and we enter the next phase of the bull market.

Phase 3 – Euphoria. Year after year of good returns have silenced the bears, and most of those who remained bearish in phase 2 have now changed their mind. The bulls dominate the media and make up compelling arguments why prices will continue to rise indefinitely. It has become conventional wisdom that this investment class always goes up and you begin to hear familiar phrases such as “stocks for the long run”, and “real estate will always go up”. The public starts to invest en masse in this asset class, bidding up prices faster and faster, accelerating the returns and making it exhilarating for everyone. The last few investors that still sit on the side line usually gets pulled in during all this excitement.

Then, at the top of this excitement a problem starts to occur. There are not enough new investors left to continue to bid up the price so the whole thing starts to slow down but after years of superior returns most people no longer remember the pain of the last bear market and they remain hopeful, even after the market starts to head down. This is often referred to as the “bear slides down the slope of hope”. After a decade long bull market most investors are still convinced that this investment is infallible and it usually takes several years for reality to finally settle in.

After the market has peaked out, the new bear market phase begins, which goes through a cleansing process until there are no more sellers left. Only then, when all remaining investor have been cleaned out can this investment class repeat the cycle over again.

[Another way to look at the 3 phases is in the following 2 graphics sourced from the ETF Corner:

Below are two Market Emotions Cycle Graphs, the first for stocks and the second for gold:] 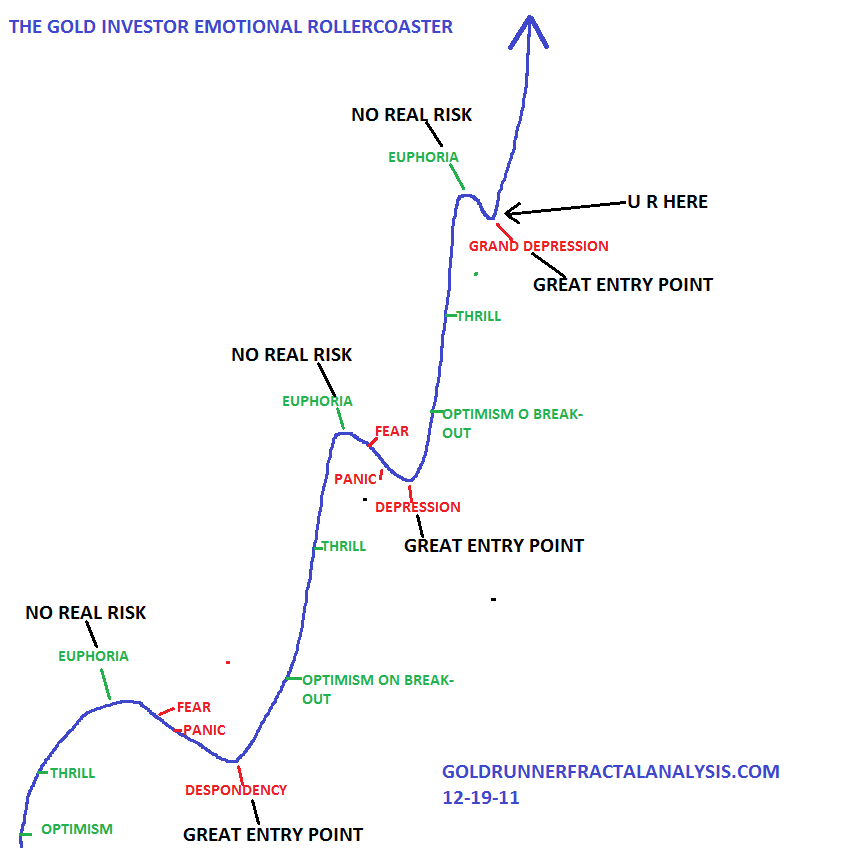 1. Market & Economic Cycles Suggest We’re in the Fall Season in More Ways than One – Here’s Why

The key to long term success in investing is understanding the difference between the “seasons” in the markets and the economy. [Let me explain the four “seasons” and why we might very well be in the “fall” season and, if that is indeed correct, why] it is time to pack away the summer allocations and break out the winter coats to hunker down for what may be a chilly 2012. Words: 1016

Many income investors have been taught to believe that “market-timing” is anathema to their investment objectives and/or that it can’t be done successfully… I will argue that this piece of conventional wisdom is false – dangerously false. In a three-part series of essays, I will argue that market-timing needs to be incorporated as a fundamental component of income investing. I will demonstrate why market-timing is important, when it should be applied and how it should be implemented. [Read on!] Words: 1956

3. These Charts Say It All: GOLD Is STILL a BUY

With what is happening with the price of gold these past few days it is imperative to take a look at the long and short of it all (the trends, that is). In doing so it shows that we are still very much in a long-term bull market but in a short-term (yes, short-term) bear market. Let’s take a look at some charts that clearly outline where we are at and where we could well be going. Words: 625

4. Goldrunner: Gold, Silver and HUI Index to Bounce Back to Major Highs by May 2012

6. Update of Alf Field’s Elliott Wave Theory Based Analysis of the Future Price of Gold

The Elliott Wave Theory (EW) gives superb results in predicting the gold price. [While] it is a complicated system with many difficult rules [which] I explain in simple terms in this article, [I have determined that] once this present correction in gold has been completed it should [undergo] the largest and strongest wave in the entire gold bull market. The target for this wave should be around $4,500 with only two 13% corrections on the way. [Let me explain how I came to that conclusion.] Words: 1924

7. Where are We Now in the Bull Market in Gold – and How Many Years/Months are Left?

8. What Do the Presidential and Decennial Cycles Infer Will Happen in 2012?

Share
Previous Gold Bugs: You Were "Had" in the Recent Decline! Here's How to See It Coming Next Time
Next Gold Bullion, Stocks or Bonds: Which Have More Long-term Investment Risk?