The Dollar is Doomed!

When Interest Rates Rise the U.S. Dollar is Doomed! 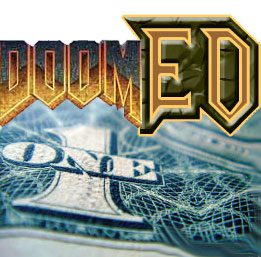 The dollar is doomed and I believe the transition is going to be fast, and very painful. Words: 1480

So says Paco Ahlgren (www.bottomviolation.com) in an article which Lorimer Wilson, editor of www.munKNEE.com, has reformatted below for the sake of clarity and brevity to ensure a fast and easy read. (Please note that this paragraph must be included in any article reposting to avoid copyright infringement.) Ahlgren goes on to say:

I have written more than 50 articles regarding the future of the U.S. dollar, and the world economy … and each one presented a piece of the puzzle, but none of them adequately addressed the entirety, nor the magnitude, of the dollar crisis we face. So I’ve spent some time going over my work, and what I’ve created below is, I believe, a fairly concise summary of my concerns.

A History of the U.S. Dollar – and My Concerns for its Future

1. Before and during the 1930s, the United States was a creditor nation. As such, it issued a prodigious amount of debt to battle the Great Depression. While I disagree with such policy, at least the government was in a financial position to use debt as a tool to battle the crisis. Today, the United States is a debtor nation. It has entered the current financial crisis owing more – in real dollars — than ever in history and now it’s issuing even more debt.

2. Likewise, in the 1930s, The U.S. was a net exporter, as well as a manufacturing powerhouse, but all that has changed. The U.S. has been issuing debt for decades, while manufacturing very little. In fact, our entire GDP seems to derive almost entirely from service and retail industries.

Sure, we had a good run in technology, but for the most part, we don’t even manufacture that anymore. Furthermore, a lot of the service industry jobs — like customer service and support — are being exported! Yet for decades we’ve propped up our retail and service industries by consuming! Think about it — we’ve amassed almost incomprehensible amounts of debt to pay for our non-stop, gluttonous shopping spree. Now seriously, how long do you think foreign governments are going to support this type of behavior by continuing to lend to the U.S.?

Don’t get me wrong: I’m no protectionist. I believe the U.S. deserves everything it’s experiencing, and I certainly don’t believe in limiting immigration or trade. However, as long as we live in a world in which balance of trade and foreign debt so dramatically impact our everyday lives, well, someone needs to point out this glaring little chunk of reality.

3. The Fed is talking out both sides of its proverbial mouth: on one hand it is saying, “We’ll lower rates just long enough to stimulate the economy, create a little inflation, and get things moving again.” Meanwhile it tells creditors, “Buy these Treasuries at historically low yields! You’re safe, because we’re in a ‘deflationary’ period, and so your real rate of return for the next 10 to 30 years (adjusting for falling prices) will be higher than the coupon.”

So which is it? Does the Fed not expect to succeed with its Zero Interest Rate Policy? Does it never expect prices to increase again? Ever? Look, if massive price increases do ensue – as many of us expect — then the bond bubble bursts. If all this printing doesn’t stimulate prices, then what? The Fed prints even more money? Then prices skyrocket (with more fury), and the bond bubble bursts anyway. No matter how you look at it, foreign investors and other creditors lose faith in the U.S. dollar and it fails. It’s a no-win scenario.

4. Let’s say you don’t have a job but let’s also say you have a $20,000 limit on your credit card and let’s say that credit card is maxed out. So you do what any good American consumer would do: you call your credit card company and ask them to give you a $100,000 limit-increase and what do you think they are going to say?

Would you lend money to someone with no job and a mound of debt, if you knew – presuming somehow he didn’t default –that the most you could get in return was four or five percent? So why would foreign governments continue to lend to the U.S. by buying Treasuries at low yields if our consumer is dead and our debt is at the highest levels in history? How long will this continue? As I’ve said so many times before, the Chinese, the Japanese, the UK, and the Saudis are not stupid. Neither are most other lenders of note. So what will the Fed do if creditors stop lending the U.S. money? That’s right, it’ll print even more dollars…

5. Imagine you own the stock of a company whose price has been increasing for decades. Now imagine the management of that company suddenly piled on debt at an unprecedented rate. Imagine shareholders started selling the stock, and management’s response was to issue yet more stock — flooding the market with shares whose value is already being questioned. How is that going to make the stock more valuable? For years, this is how General Motors operated — the company actually issued debt and more stock just to increase their dividend! Many of us saw the imminent collapse decades ago, and yet investors and analysts alike defended GM rabidly.

This is precisely what has been happening with the U.S. dollar for the last century and now the government is piling on unprecedented amounts of debt while printing unparalleled sums of currency – perpetuating the largest Ponzi scheme ever. To make matters worse, every major economic power in the world is following suit. How is this going to end well? You can’t just print or borrow wealth. It doesn’t work that way.

6. In the 1970s, Fed Chairman Paul Volcker drove interest rates above 20% in order to battle the inflationary price increases that appeared because of the same sort of monetary policy the Fed is pursuing today. Even then, many economists believed it would fail; once prices get started to the upside, they’re almost impossible to stop and yet, somehow, Volcker did it – but I think he got lucky… very lucky.

Even so, Volcker didn’t have to face some of the challenges in our economy today — namely massive credit card debt, and adjustable rate mortgages. In the 1970s, the primary source of consumer debt was in the form of fixed-rate mortgages; when prices started climbing, this was actually good for mortgage holders: while the values of their homes increased dramatically, so did their wages but their mortgages remained fixed.

Today, a tremendous amount of debt is variable-rate. When the Fed starts raising rates to battle inflationary prices increases it will cause monumental default as rates adjust upward, and consumers find themselves unable — or unwilling — to service their debt.

7. We’ve talked many times about how the U.S. government has committed more than $13 trillion to battling this crisis, alone. We’ve also talked about the historical implications of that decision. My detractors claim that I just don’t understand – that our fractional reserve system justifies the printing of such astronomical sums of money. This argument eludes me: velocity won’t remain low forever, and when these mounds of cash finally burst the dam and get into the economy, how is a multiplier going to mitigate massive price increases? Fractional reserve banking is nothing more than the imposition of economy-wide leverage, amplifying the effects of printed currency exponentially.

Look, this isn’t about being right. In fact, I really want to be wrong. Sure, I’m short Treasuries, and I stand to make a lot of money if I’m correct. In fact, this is one of the few times in my career I actually believe I’m in a no-lose position: no matter what happens, rates are going to rise.

I would prefer a scenario in which rates rise slowly, and the U.S. dollar — as well as the economy — stabilize gently; while the alternative makes me wealthy, unfortunately, its actualization necessarily means I will be forced to watch everyone around me suffer – and that’s a troubling thought. No matter how much I don’t want to believe in the worst-case scenario, however, I do.

The U.S. dollar is doomed, and the transition is going to be fast, and very painful.

Share
Previous The Baltic Dry Index: Why You Should Use It and How to Do So (2K Views)
Next The “Life of Stirling” After High School