A major fund manager has warned investors and savers to have an allocation to “physical cash,” “including  gold & silver” to protect against “systemic risk”…which he foresees as likely to happen in “the next five years rather than ten”.

The above edited excerpts, and those below, come from an article* by Mark O’Byrne (goldcore.com) originally entitled Hold “Physical Cash,” “Including Gold and Silver” To Protect Against “Systemic Risk” – Fidelity which can be read in its entirety HERE.

Ian Spreadbury, who oversees the investment of over £4 billion of clients money in bond markets as a fund manager for Fidelity, one of the largest mutual fund and investment groups in the world, believes that:

To deal with these risks Spreadbury advocates a well diversified portfolio: 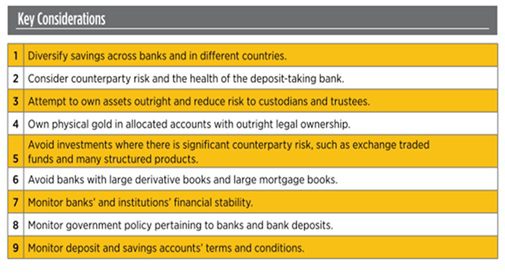 “The message is diversification. Think about holding other assets. That could mean precious metals, it could mean physical currencies.”

Share
Previous Noonan on: What Is “Money”? What It Is Not! (+2K Views)
Next 6 Symptoms That Would Indicate An Economic Collapse Is Imminent (+3K Views)