power of the US Dollar over time – and it looks terrifying. I call it the “stupid” chart, though, because it is a total misrepresentation of the facts because it isn’t telling the full story. Here’s why.

The above introductory comments are paraphrased excerpts from an article* by Cullen Roche (pragcap.com) entitled This Commonly Referenced USD Purchasing Power Chart is Useless.

Roche goes on to say in further edited excerpts:

What the chart below supposedly conveys is constantly cited by hyper-inflationists and other people trying to convince you that the world is quickly coming to an end thanks to the “fiat monetary system” and all the “money printing” that’s going on due to nefarious governments.  Well, the chart is basically a misrepresentation of anything important. 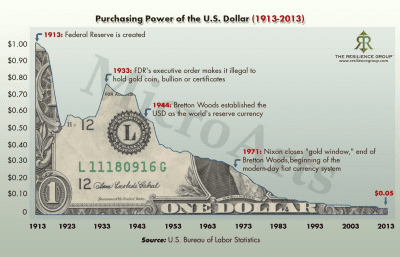 The problem is, the above chart doesn’t show whether per capita wages are rising or falling.  For instance, if your dollars buy you half as many eggs today as they did in 1913, but your income is twice as high as it was in 1913 then you haven’t gone backwards.  Yes, the USD’s purchasing power has fallen, but your ability to buy the same quantity of eggs has remained exactly the same.

Your living standard hasn’t fallen even if the purchasing power of the dollar has declined so it’s important to put this in the right perspective here.  When we look at this discussion it’s best to use an inflation adjusted perspective of wages and salary accruals on a per capita basis – and when we run that figure the chart looks a lot different (reliable data only goes back to 1947): 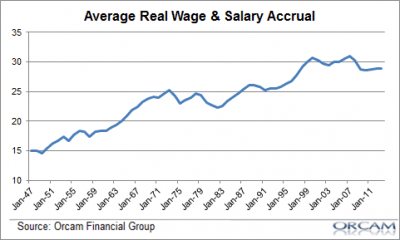 It’s not exactly a thing of glory (especially the last 20 years or so), but it clearly tells a very different story than the “stupid” chart above which really tells us nothing.

Next time some hyperinflationist throws the USD purchasing power chart in your face refer him to this post and tell him he isn’t telling the full story.

1. What the History of “World” Currency Likely Means for the U.S. Dollar – and Why

It’s common for the world’s most powerful country to issue a currency that becomes adopted around the world as the standard for international trade but whenever that country reaches a point of epic, terminal decline, and especially when it rapidly debases its currency, the rest of the world seeks an alternative. This article outlines the history of the rise & fall of “world” currencies over the centuries and then comments on what the future likely holds for today’s “world” currency – the U.S. dollar. END_OF_DOCUMENT_TOKEN_TO_BE_REPLACED

The U.S. $1 dollar bill has been redesigned many time since first being issued back in 1862. What we almost exclusively use today is the version designed in 1963. The following extremely informative infographic explains what all the different symbols on the dollar mean, who is on the front & back of all the U.S. currencies currently in use and the $500, $1,000, $10,000 and $100,000 (yes, $100,000!) bills that are no longer in production. END_OF_DOCUMENT_TOKEN_TO_BE_REPLACED

3. Monetary System Collapse Guaranteed – Here’s Why & How to Invest & Insure Your Wealth Accordingly

Our monetary system is guaranteed to collapse. The central banks prints money like there is no tomorrow. The governments spends like a drunken sailor and yet inflation is benign and interest rates sit at generational lows. Banks are gaining in profitability while their bad debts are being erased by rising asset prices. What’s not to like? Plenty! This article goes into the details of the money creation process to understand how and why this is happening, what the future implications will be and how to best invest to protect oneself from these eventualities. END_OF_DOCUMENT_TOKEN_TO_BE_REPLACED

The American dollar will be overthrown…in as short a period as 5 to 10 years says one analyst while another believes it will happen as early as 2015, 2016 latest. Here’s why. END_OF_DOCUMENT_TOKEN_TO_BE_REPLACED

Has U.S. currency as we know it today always been pretty much the same? The answer is no. If you love money as much as I do, you’ll love the infographic below and all the money facts it contains. Take a look. It’s very interesting! END_OF_DOCUMENT_TOKEN_TO_BE_REPLACED

6. Concern About U.S. Dollar’s Status As the World’s Reserve Currency Status Is Overstated – Here’s Why

The U.S. Dollar’s status as a reserve currency seems to be a perennial concern for many people these days. I think this concern is often dramatically overstated. Here’s why. END_OF_DOCUMENT_TOKEN_TO_BE_REPLACED

At the end of last year virtually every every single economist expected interest rates to rise this year as the Fed tapered their purchases and the economy improved but, in fact, interest rates on the 10 year U.S. Treasury have been going down year to date (from 3% to 2.5% after rising from about 1.6% to 3% last year). The masses, going along with this crowd, got fooled but we have been calling for a decline in interest rates for some time now due to world-wide deflation and it couldn’t be clearer to us that this is the most likely scenario for the United States. Let us explain. END_OF_DOCUMENT_TOKEN_TO_BE_REPLACED

9. Debt Default or Hyperinflation? Which Will It Be?

The Fed, together with other central banks from around the world, have created the perfect crescendo of worldwide credit bubbles and asset bubbles leading to the excesses and decadence which are the normal finale to a secular trend. They have totally destroyed all major world currencies and left the world with debts that cannot and will not be repaid with normal money. As such, there are only two alternative outcomes, debt default or hyperinflation. Both will have disastrous consequences for the world economy. END_OF_DOCUMENT_TOKEN_TO_BE_REPLACED

10. Inflation or Deflation: Are We Approaching the Tipping Point?

Might our Inflation-Deflation Watch be suggesting a breakout in asset price inflation is about to take place? Could it, in fact, be presaging the start of John William’s hyper inflationary depression in which prices rise exponentially even in light of massive unemployment and bankruptcies? This article analyzes the situation. END_OF_DOCUMENT_TOKEN_TO_BE_REPLACED

Share
Previous Noonan on Gold & Silver: “Devastating End Awaits Those Who Remain Unaware of Being Unaware” (+2K Views)
Next Silver’s Neon “Sale!” Sign Is Flashing Like A Disco Ball! Here Are 7 Reasons Why (+3K Views)

Inflation: Which Categories Are Being Hit the Hardest?