The price of gold, on a quarterly basis, is 86% correlated – yes, 86%! – to total government debt going back to 1975… and a shocking 98% over the past 15 years! [As such,] it would seem like a no-brainer investment thesis to buy gold… as a proxy for the not-otherwise-investable thesis that US total government debt will increase in the future. [But there is more – and it is disappointment for gold bugs – read on!] Words: 280; Charts: 3

So writes Eric Boughton in edited excerpts from his post* on SeekingAlpha.com entitled Gold And U.S. Government Debt: Highly Correlated.

[This article is presented compliments of www.munKNEE.com (Your Key to Making Money!) and may have been edited ([ ]), abridged (…) and/or reformatted (some sub-titles and bold/italics emphases) for the sake of clarity and brevity to ensure a fast and easy read. Please note that this paragraph must be included in any article re-posting to avoid copyright infringement.]

Boughton goes on to say in further edited excerpts:

Here is the scatterplot with the relationship: (The most recent datapoint, 9/30/12, is the one farthest to the right on the chart.) 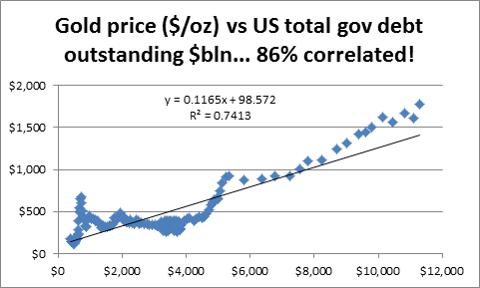 To see this a little better, I multiplied the gold price by 7 so the scale would be about the same, and charted both together over time. See below: 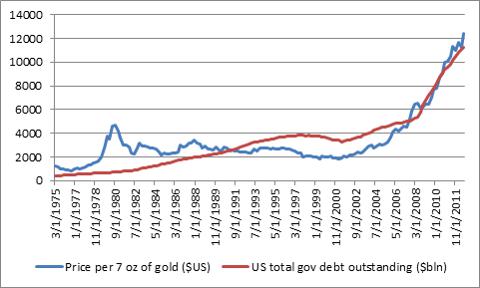 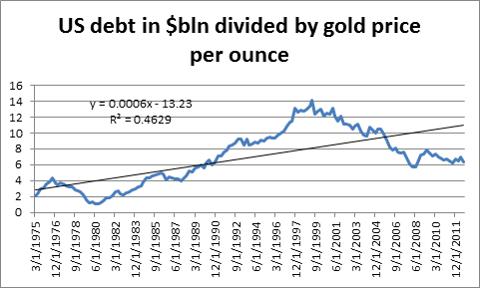 The current multiple of 6.37 is at a record distance (1.5 standard deviations) below the trendline ratio of 11.48.

If the relationship [between US debt and the price of gold] returns to trend, then the gold price will “underperform” the change in US government debt from here forward. For example, if total debt goes to $17 trillion (from today’s $11.3 trillion) over the next 5 years, and the ratio goes to 12.57 (continuing on the same trendline), then the gold price would go back down to $1352 by the end of that 5-year period [2017].

[Editor’s Note: The author’s views and conclusions are unaltered and no personal comments have been included to maintain the integrity of the original article. Furthermore, the views, conclusions and any recommendations offered in this article are not to be construed as an endorsement of such by the editor.]

1. Gov’t Debt Will Keep Increasing Until the System Implodes! Are You Ready?

Why are so many politicians around the world declaring that the debt crisis is “over” when debt-to-GDP ratios all over the planet continue to skyrocket?  The global economy has never seen anything like the sovereign debt bubble that we are experiencing today. This insanity will continue until a day of reckoning arrives and the system implodes.  Nobody knows exactly when that moment will be reached, but without a doubt it is coming. Are you ready? Words: 1270

The U.S. is one of the worst debt ‘offenders’ in the world [and, as such, unless] dramatic spending cuts and tax increases [are undertaken within the next 5 years,] America’s debt/GDP ratio will continue to rise, the Fed will print money to pay for the deficiency, inflation will follow, the dollar will inevitably decline, bonds will be burned to a crisp, and only gold and real assets will thrive. [Here’s why.] Words: 674

4. World’s Largest Economies Have NO Choice But to Engage in Massive Money Printing – Here’s Why

The choice facing the leaders of the world’s largest economies is a simple one: Either they engage in massive money printing, or they let the world slip into another great depression. This article examines why they have no choice but to print money, something which will have significant consequences for everyone. Words: 560

5. Governments Will Want – Will NEED – Much Higher Gold Prices! Here’s Why

Share
Previous The Paradox of QE: If It Is Successful the Federal Reserve Will Fail & Plunge U.S. Into New Fiscal and Political Crises
Next America’s Master Class Has Taken U.S. By the Throat! Here’s Why (+2K Views)