Barron’s professional money manager survey indicating a record 74% money managers being bullish on markets even at current levels. When valuations are measured with respect to expected growth, [however, the ensuing ratio, the PEG ratio,] suggests overvaluation at these levels. [Let me explain further.]

(Editor’s Note: This version of the original article has been edited ([ ]), abridged (…) and reformatted (some sub-titles and bold/italics emphases) for the sake of clarity and brevity to ensure a fast and easy read. This paragraph must be included in any article re-posting to avoid copyright infringement.)

The PE ratio is one good measure of market valuation. The PEG ratio makes this measure complete as it takes future growth into consideration and measures valuations with respect to expected growth [Price:Earnings Growth expectations]. For the S&P, the PEG ratio suggests overvaluation at current market levels. The chart below gives the PEG ratio for the S&P 500 index along with the PEG for the mid-cap and small-cap stocks. In general, a PEG ratio of over 1 indicates overvalued stocks or markets. Certainly, valuations are stretched at current levels. 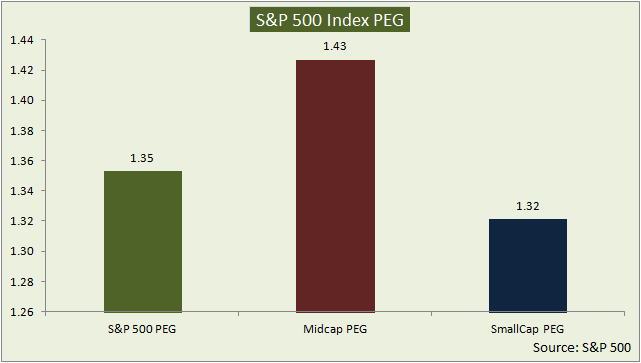 It is also important to note that the PEG ratio has been calculated based on FY13 expected earnings of $107.55. I am of the opinion that earnings estimates might be just too optimistic. The actual earnings for FY12 was $86.5. It might be unrealistic to expect a 24% earnings growth in the current economic scenario. Therefore, if FY13 earnings estimates are revised downwards, the PEG ratio will indicate even more expensive markets.

The conclusion is to avoid fresh exposure to equities at these levels. Investors can consider booking profits and considering fresh exposure on corrections. I do expect equity markets to witness a meaningful correction over the next 3-6 months.

Many articles have been posted today, May 1st, regarding the investing adage “sell in May and go away”. Below are links to 10 such articles on the subject to help you decide what course of action you should take.

Unknowingly, with QE Infinity, Bernanke has put in motion a runaway move in the stock market that will end in some kind of crash this summer. The crash will cause Bernanke to double down on QE which will trigger a spike in commodity prices. Let me explain my rationale.

In the 7 years that the Greedometer has been used there have been zero missed calls, and zero false alarms.  The 7th warning began in January and in late February,the Greedometer gauge reached an epic 7900rpm which is marginally higher than the 7700rpm maximum reading seen 3 months prior to the S&P500 peak in October 2007. [This article outlines the development and successes of the Greedometer and the new Mini Greedometer and what they are predicting for the stock market in 2013.] Words: 1420

4. It’s Time to Apply the “Greater Fool Theory” and Sell Your Winners to All Those Fools

5. This Metric Strongly Suggests a Major Correction in the S&P 500 Could Be Coming

7. Watch Out For Falling Stocks! Here’s Why

8. You Need to Stay in the Stock Market Despite an Impending Economic Collapse – Here’s Why

9. You Can Insure Your Portfolio From Potential Capital Loss – Here’s How

12. Insider Trading Suggests That a Market Crash Is Coming

13. This False Stock Market Bubble Will Burst, Major Banks Will Fail & the Financial System Will Implode! Here’s Why

15. 5 Sound Reasons Investors Would Be Better Off On the Sidelines Than In the Market