Lorimer Wilson March 5, 2013 Comments Off on It’s Time to Apply the “Greater Fool Theory” and Sell Your Winners to All Those Fools (+2K Views) 2,923 Views

So say edited excerpts from the introduction to an article* by Jeff Seymour (www.triwealth.com) entitled Dow Hits New High: Attention Winners – Please Sell Your Shares To The Losers Now.

Seymour goes on to say in further edited excerpts:

In early 2007, corporate insiders were dumping their shares at a manic pace (see the red line in the graph below — the ratio of shares sold to bought by corporate insiders). They continued to sell big into each successive market rally as the year went on, but at a progressively less panicky pace. While this was happening, retail investors were busily buying (part of the retail investor buy high sell low stigma). The S&P 500 rallied early in the year, took several breathers throughout the year, and achieved a new all time high in July 2007 and again in October 2007. We know what came next. Who suffered the brunt of the losses? Retail investors. Someone has to lose. 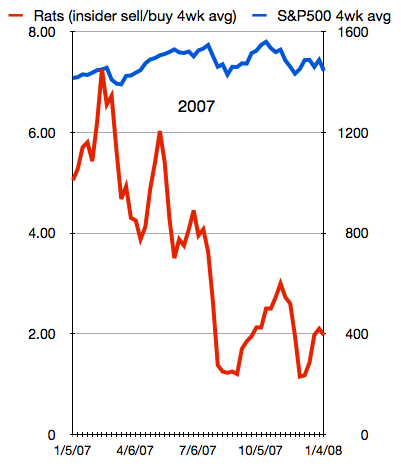 Let’s back up further to the previous all time high in U.S. stock markets: year 2000. The S&P 500 set a new all time high in March 2000, then would go sideways and approach the same level in July and August. Not much different from the 2007 script. Corporate insiders were again dumping their shares and selling into rallies. How about the retail investor? Well, they had not yet been burned by the 2000-2003 crash nor the 2007-2009 crash, so they were buying shares at a record pace in March 2000. You recall what came next.

That’s the perfect segue into 2013. The last time retail investors were buying stocks as heavily as they were in January and February this year was…drum roll please…March 2000. Once again, corporate insiders have been dumping their shares — at new all time record rates! There’s ratification for you (no pun intended).

How Now to Invest

What might you do with this knowledge? Lots of things:

The third time’s the charm — as they say. Tragically.

There have been 6 previous Greedometer warnings – 5 of them real world, 1 from back testing alone – in the 7 years that the Greedometer (or parts that formed its predecessor) have been used in the real world, and there have been zero missed calls, and zero false alarms.  The 7th warning began in January and in late February,the Greedometer gauge reached an epic 7900rpm which is marginally higher than the 7700rpm maximum reading seen 3 months prior to the S&P500 peak in October 2007. [This article outlines the development and successes of the Greedometer and the new Mini Greedometer and what they are predicting for the stock market in 2013.] Words: 1420

3. This Metric Strongly Suggests a Major Correction in the S&P 500 Could Be Coming

The S&P 500 is on its way to building a “Domed House” and to challenge multi-year highs, or even all-time highs, in the process. Based on the forecast of my proprietary Long Wave Index, the broad market should be in a short-term bullish time-window until March 21st/13 by which time the “roof” phase of the formation should be complete with the S&P 500 having reached a projected peak of 1570. Words: 634; Charts: 4

6. Watch Out For Falling Stocks! Here’s Why

7. You Need to Stay in the Stock Market Despite an Impending Economic Collapse – Here’s Why

8. You Can Insure Your Portfolio From Potential Capital Loss – Here’s How

11. Insider Trading Suggests That a Market Crash Is Coming

12. This False Stock Market Bubble Will Burst, Major Banks Will Fail & the Financial System Will Implode! Here’s Why

14. 5 Sound Reasons Investors Would Be Better Off On the Sidelines Than In the Market