The price of silver is significantly disconnected from its underlying

fundamentals and, as such, is undervalued due to the actions of a handful of large speculators in the futures markets. This article identifies 3 such specific examples of such action.

The above edited excerpts, and those that follow, are from an article by Power Hedge (powerhedgeglobal.com) posted on SeekingAlpha.com under the title Silver Is Fundamentally Undervalued and which can be read in its entirety HERE.

The futures market is highly levered and neither the buyers nor the sellers of the contracts expect to settle through physical delivery. As futures contracts can be essentially printed out of thin air, the sellers of such contracts can artificially increase the supply of “paper gold” and thus alter the supply/demand price discovery mechanism. Evidence of this comes from looking at trading volumes in the silver futures markets.

Below are 3 such examples:

1. During a one day period at the end of June, silver shorts overwhelmed the broader market and depressed prices, even as investor demand for silver was high. [See details HERE.]

The surges in volume during each of the sell-offs illustrated in the chart below clearly show that each time the price declines were caused by either a group, or a single large participant in the futures market, entering into a short position in one large trade. There would be little reason to do this other than to artificially reduce the price of silver. 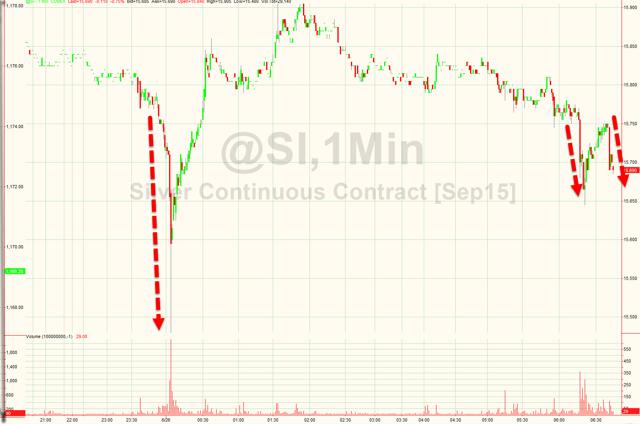 The fact that the price of silver began to increase following each of the sell-offs indicates that the overall market demand for silver is quite strong. However, there certainly appears to be some participants attempting to manipulate the market in order to keep prices artificially low.

2. The U.S. Mint sold out of silver coins at the same time the price of silver hit its 2015 lows – this should not be possible given economic laws. 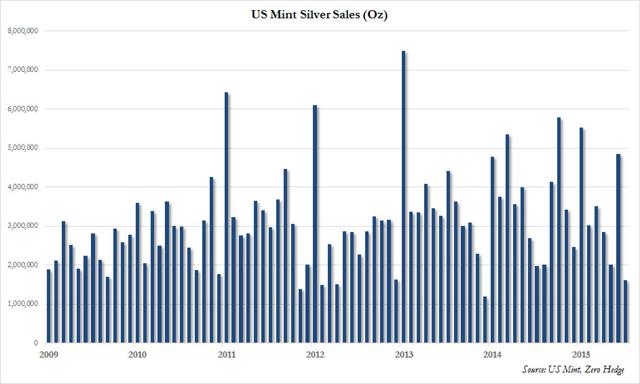 As the chart above shows, the volume of silver being sold by the U.S. Mint in the months prior to the depletion of silver inventories was only average compared to previous multi-month periods. Thus, it did not seem to be a surge in demand that caused this inventory depletion but the actual cause is uncertain. While it is possible that silver supplies have become more constrained by the current low prices than the market appreciates…[it is interesting to note that] on the same day that this announcement was made, the spot price of silver declined to its lowest level of the year (up until that date). 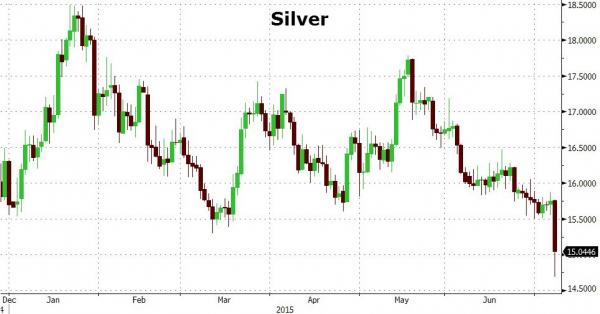 The economic principles of supply and demand state that this should not be possible in a properly functioning marketplace. As a shortage is an indication that demand exceeds supply, the price should increase until the two are in equilibrium. Thus, silver is undervalued at the current market price.

3. The amount of silver available for delivery is well below the amount represented by short contracts.

…On June 1, 2015, Mr. Keith N. Neumeyer, President and CEO of First Majestic Silver Corp., sent a letter to the Chairman of the Commodities Futures Trading Commission asking him to investigate suspicious speculative silver short positions representing nearly 163 days of production worldwide, the most of any commodity, [HERE is the full text of the letter.]…by a small number of financial firms who were short-selling a substantial percentage of the world’s annual production of silver in the paper markets. There is little reason for these firms to be holding such a concentrated short position unless they are actively attempting to distort the silver price.

1. JP Morgan Is Stockpiling HUGE Amounts of Physical Silver – Why?

Why in the world has JP Morgan accumulated more than 50 million troy ounces of physical silver since early 2012, adding more than 8 million troy ounces during the past couple of weeks alone? Why are they doing this? What do they know that the rest of us do not? Could it possibly be that they are anticipating another great economic crisis? We are definitely due for one! Here’s what I think is going on behind the scenes.

Share
Previous Gold: Schizophrenia Reigns Supreme – Here’s Why
Next Why the Pessimists May Be Right. What That Means For Gold & Silver (+2K Views)