Silver Is the Most Head-Turning Precious Metal – Here’s Why

Lorimer Wilson October 7, 2018 Comments Off on Silver Is the Most Head-Turning Precious Metal – Here’s Why 1,399 Views

…Silver prices are down more than 70% from their 2011 peak, making it the most head-turning

precious metal right now…I don’t know if silver prices have bottomed – and there are plenty of risks to consider – but… I think a long, patient position at current prices or better will be rewarded over time. Here’s why.

As a commodity, we’d expect basic supply and demand to be one of the most important drivers of silver price. Over the past decade, silver supply increased at an annualized rate of 1.57% and demand decreased slightly at -0.55%. Overall the supply and demand story has been fairly consistent, and there haven’t been extreme moves on either side. 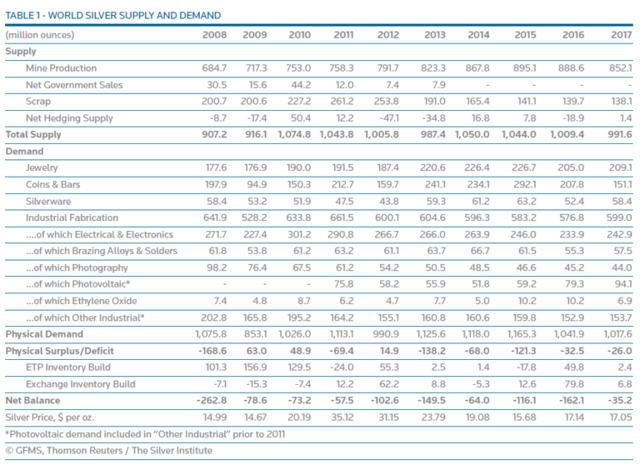 …There are a couple things worth noting, however.

Commodity markets are notorious for speculative activity and precious metal speculation goes wild when inflation joins the party [as] shown below.

The Federal Reserve was neck deep in unprecedented measures like ZIRP (zero interest rate policy) and QE (quantitative easing). Those policies were designed to be stimulative and so many people expected higher inflation. Silver prices followed those expectations and crashed when they were not met.

…Silver prices are still sliding, likely influenced by expectations for continued weak inflation, but inflation looks to have bottomed in 2015 and has steadily increased since (shown as CPI below). With a 2.7% read in August, inflation is actually still well below the long-term annual average of 4%. 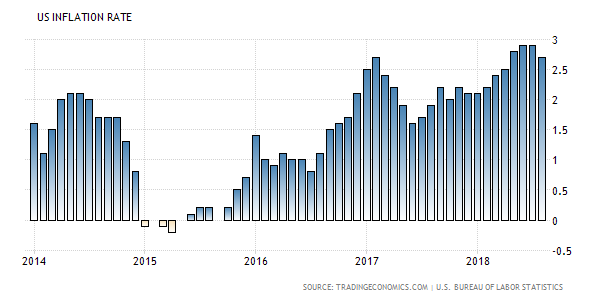 In addition, the headline figure masks some of the more volatile underlying data. For example, energy items were up 10.2%, with gasoline prices up 20.3%! 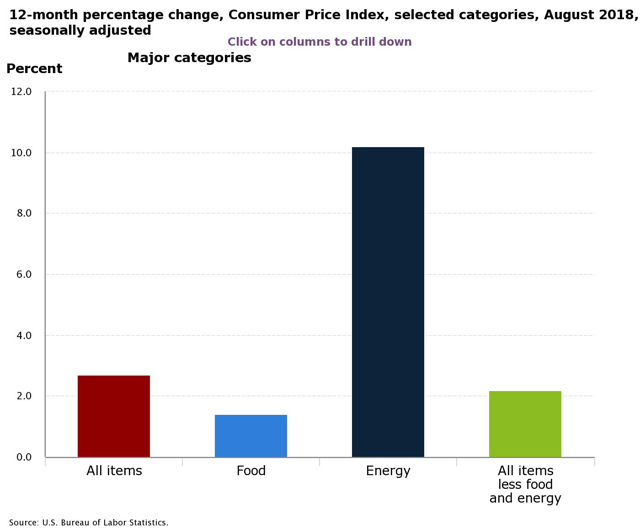 Inflation is on the rise and could accelerate given the tax stimulus, trade-tariffs, strong employment, and the later stage of the business cycle. If inflation comes in hotter than expected that would be exactly the kind of catalyst that drives up silver prices.

…I don’t know…[when it will happen but] one of the most widely followed relative measures is the gold to silver ratio. The rationale is gold and silver are both limited precious metals with widely recognized monetary value. and so they should maintain some range of relative value (think the US Dollar versus the Euro). 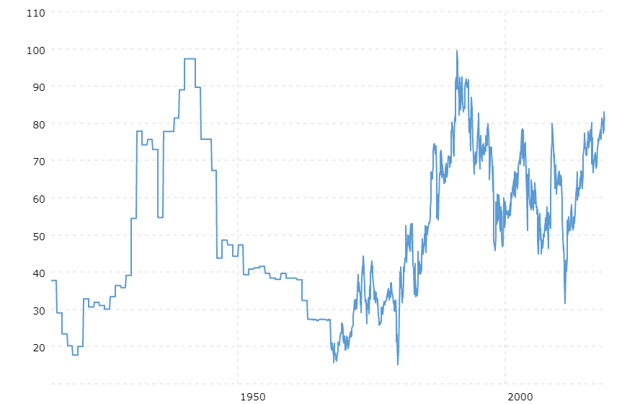 Over the past 100 years, the ratio has averaged about 60. In other words, gold prices have, on average, been 60 times higher than silver prices. Currently, the ratio reads about 80. This isn’t the highest in history, but it’s the second highest reading since the end of the gold standard in 1973. The long-term average post-gold standard is about 47.

With gold prices around $1200/ozt, a ratio of 50 would imply silver prices of around $24/ozt, or about 70% upside from silver’s current $14/ozt handle. The table below shows a range of implied silver prices based on $1200/ozt gold. Of course, these are very simple estimates and there are many other variables to consider. I’m not trying to make a precise forecast, I’m simply pointing out silver prices look relatively low. 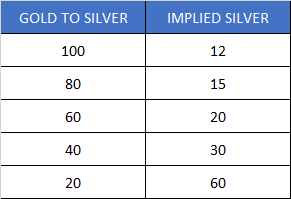 …Higher rates increase the costs of physical silver investing and also influence the relative attractiveness of other safe-haven assets like bonds.

U.S. rates are especially important because precious metals, like most commodities, are denominated in U.S. dollars. All else [being] equal, rising U.S. interest rates can strengthen the U.S. dollar and hurt silver prices, shown below.

Clearly, rates are rising in the U.S. and that could mean additional downside for silver prices. As long as inflation stays tame and rates rise because of healthy, real, economic expansion, I think silver prices remain under pressure. That probably doesn’t reverse until rising rates are explained by inflation and widening credit spreads. There’s no telling when that happens and longs should be willing to bear the pain until it does.

…I don’t know if silver prices have bottomed and there are plenty of risks to consider but I do know silver is widely out of favor, prices are low enough for a look, and there are several catalysts for upside (inflation, risk aversion, relative value, dollar reversal, etc.).

Short-term volatility is certain, but the bottom line is I think a long, patient position at current prices or better will be rewarded over time. If you take a position, do your due diligence, build it over time on price weakness, and don’t bite off more than you can stomach.