the system to make up for understatement of the gold price due to U.S. price fixing on its way to an inflation-adjusted value of approx. $2,300 – and that is just the beginning. If, and when, we see a release into the market of the trillions of U.S. dollars being stored on balance sheets of banks, companies, and other countries around the world then the price of gold should explode upward. Let me explain why that would be the case. Words: 850

So says Robert Kientz (www.thedropshadow.com)  in paraphrased comments in an article entitled “Predicting The Future Gold Price”  which Lorimer Wilson, editor of www.munKNEE.com (Your Key to Making Money!), has edited ([ ]), abridged (…) and reformatted below for the sake of clarity and brevity to ensure a fast and easy read. The author’s views and conclusions are unaltered and no personal comments have been included to maintain the integrity of the original article. Please note that this paragraph must be included in any article re-posting to avoid copyright infringement.

[When we] compare the gold price to money measures since 1973…we get the following graph [which shows that] the gold price has closely tracked M2 and M3 monetary measures. 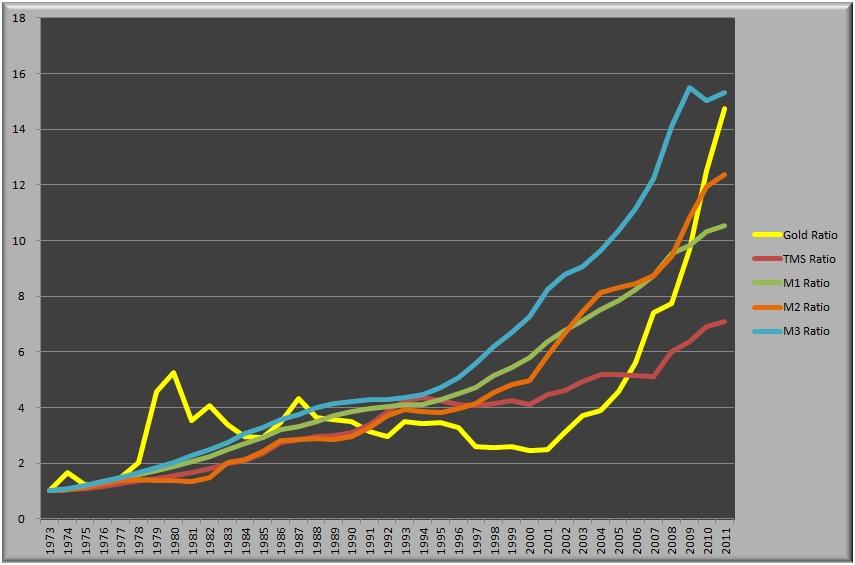 There is one caveat to [the above] comparison, however. The U.S. artificially set the price of gold until 1971 …when President Nixon ended convertibility of U.S. dollars into gold, [so] what likely happened – since we know that U.S. monetary aggregates had increased from 1913 to 1971 which precipitated the flood of U.S. dollar to gold redemptions by other countries – is that the price of gold was really undervalued in terms of U.S. dollars. Therefore, in the chart above, we see gold ‘catching up’ to the amount of money in the system.

Because there is much argument over which monetary aggregate number actually represents usable currency in the system (and which portion equals credit and relending), I…[have] graphed [below] the inflation rate** since 1913 to 2011, on a 5 year increment, from data provided by the Minneapolis Federal Reserve. 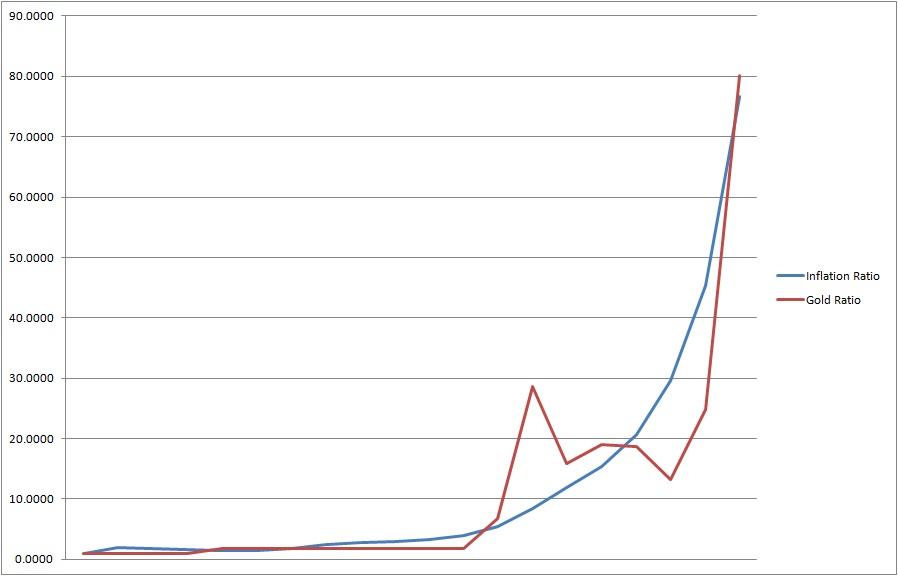 ** Note: Because of manipulations to the official inflation rate as per Boskin Commission recommendations, I substituted the Shadowstats.com SGS inflation rate calculation from 1981 onward to reflect a consistent approach to measuring price inflation since 1913.

As you can see in the above chart, the price of gold, once free to float in the market, has gravitated to its inflation-adjusted value. That is why we saw the large increase in gold value in the previous chart against monetary aggregates: gold appreciation surged to make up for understatement of gold price due to U.S. price fixing.

It is worth noting here that while gold appears to be fairly valued on an inflation-adjusted basis, we are not done yet in our future price predictions on gold. We know that recently gold traded in the $1900 range. So why did it move so high? Investors also tend to price in future expectations on the price of gold based on current economic trends. $1900 was an expectation of future price levels but the pullback was experienced because the inflation adjusted price of gold didn’t support the $1900 price level – yet.

Price inflation reflects the inflation of the number of currency units printed or otherwise made available for public use against the subsequent increase in economic production. If economic production grows at 2% and money is printed at 4%, then one could expect roughly 2% inflation in prices if all monetary units are released in the market.

In the last few years, however, not all monetary units have been released into circulation [with] many of these monetary units [being] stored on balance sheets of banks, companies, and even other countries. In March 2011, [for example,] it was reported that China held $3.04 trillion in U.S. dollar reserves,…Japan has over $1 trillion…[and] several trillion more are held by various central banks around the world.

In addition, U.S. companies and banks have been holding large amounts of cash in their accounts – the Wall Street Journal reported in September that U.S. companies sat on $2 trillion in cash and other liquid assets, up $88 billion from earlier this year…hoarding half of the cash they amassed overseas – since the recent economic bailouts threatened the stability of the banking system. While U.S. companies had leveraged highly on debt during economic expansion, they chose to conversely build large treasure chests of cash during current economic malaise to service those existing debt obligations and spruce up their balance sheets…

As we see in the next graph, many countries [have been] actively expanding their money printing programs over the last ten years [with] some [doing so even] more than the U.S. Federal Reserve. 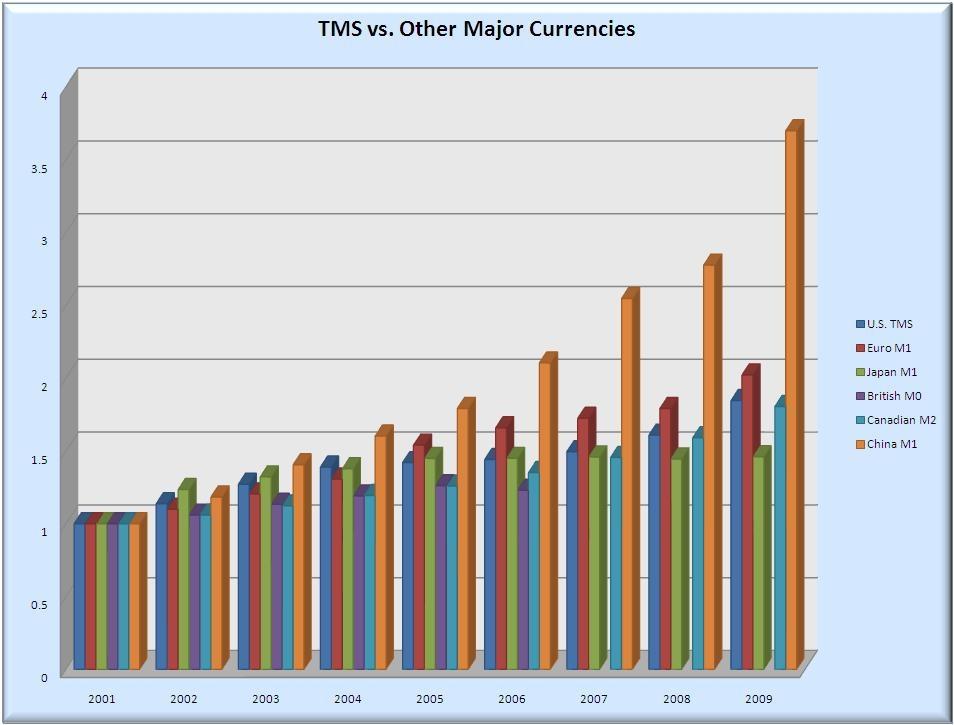 Share
Previous Might Silver's Current Chart Similarity with 2008 Be Implying What's About to Happen to Rest of Market?
Next The Global Debt Clock: A World Debt Comparison (+2K Views)