There are numerous…constructive fundamental, technical, and psychological variables that suggest gold is likely going substantially higher from here [and, as such,] this is likely an extremely good time to accumulate gold, gold miners, and other gold-related assets. 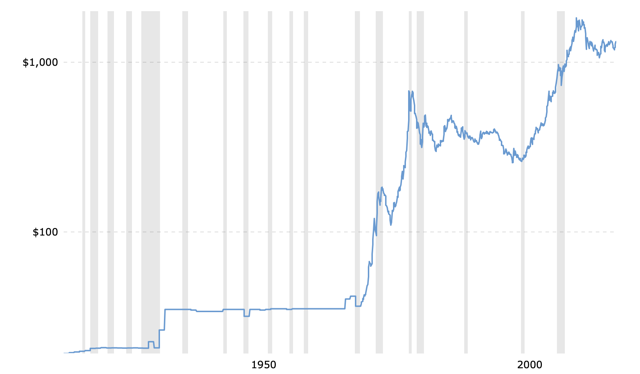 …The U.S. continues to expand its monetary base, debt, treasury securities, and derivatives at an alarming pace….Just since 2000:

[From the above] we see that: [It should be noted here that]…

People often say that gold is a good hedge for fear in the market, a recession, and so on. However, it is not so much that gold is a good hedge against fear or a recession, as it is a great investment in times of monetary expansion. The Fed’s number one tool for dealing with a slowdown or a recession is to inflate the money supply by lowering rates and/or by introducing QE. That is why gold continuously goes higher, as its price has a direct correlation to the number of dollars circulating the planet.

Despite the nice 15% appreciation over the last 6 months, there are numerous indicators that suggest gold prices are just getting started here.

…Once more market participants begin to catch on that the Fed’s likeliest path forward is looser, not tighter, one of the best investment vehicles at this time will be gold, so expect a shift in sentiment to possibly spark extraordinary demand for gold and gold-related assets in future years.

Ultimately gold will likely continue to appreciate throughout 2019, should go substantially higher in 2020, and will very likely break out to new all-time highs over the next several years.

Editor’s note: The above summary* of the original article by Victor Dergunov has been edited ([ ]), restructured and abridged (…) for a 67% faster- and easier – read. The author is receiving compensation from Seeking Alpha for pageviews of his original article as posted there so please refer to it for the unedited version. Also note that this paragraph must be included in any article re-posting to avoid copyright infringement.

*The author’s views and conclusions are unaltered and no personal comments have been included to maintain the integrity of the original article. Furthermore, the views, conclusions and any recommendations offered in this article are not to be construed as an endorsement of such by the editor.

Share
Previous Pay Off Your Mortgage Years Earlier & Save $Thousands! Here Are 6 Ways
Next Watch For Breakout Of HUI & XAU Indices Above Key Resistance Levels