Moolman: “Silver Is the Bargain of the Century!” (+2K Views)

…When you look at the silver price, relative to US currency (the amount of actual US dollars) in existence, then it is at its all-time 100-year low making it the bargain of the century. Let me explain.

This article is an edited ([ ]) and revised (…) version of the original (written by Hubert Moolman) to ensure a faster & easier read. It may be re-posted as long as it includes a hyperlink back to this revised version to avoid copyright infringement.

The lower the price of silver is relative to the monetary base, the more the currency is debased. The U.S. dollar is now the most debased it has ever been over the last 100 years, relative to silver (and gold). With all the excess dollars out there, the market will eventually seek an equilibrium, which means that silver will spike in price relative to the U.S. monetary base, as it did in the late 70s.

Below, is a long-term chart of the silver price relative to the U.S. monetary base (in billions of dollars) 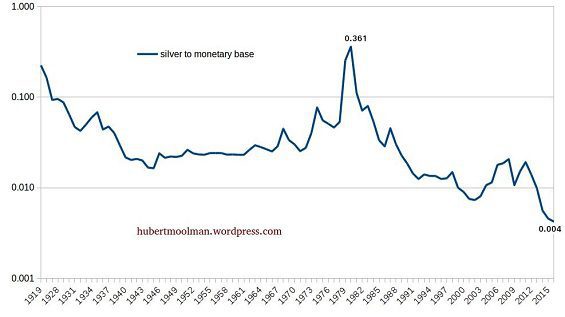 There are many signs that point to the fact that the silver price is about to correct this situation, by spiking much higher. This will come about with a lot of financial pain, especially since it will come with a massive debt collapse.

Share
Previous This Autumn Will Be One Of Market Turmoil & Shock – Here’s Why
Next The Fed’s Efforts To Increase Inflation Have Failed (To Date!) – Here’s Why (2K Views)