Modern Monetary Theory: If you read only one post all year, this is the one (+2K Views)

If you read only one…post all year, this is the one I want you to read. I think it’s that important [so please]…take some time to learn about Modern Monetary Theory.

…Modern Monetary Theory (MMT) is a macroeconomic theory that contends that:

…MMT’ers believe that government’s red ink is someone else’s black ink. Sure, the government owes dollars, but they have a monopoly of creating those dollars, and not only that, the creation of more and more dollars is essential to the functioning of the economy.

[Indeed, according to] Professor Stephanie Kelton from Stony Brook University, it is immoral not to utilize this power to fix problems in our society.

…[The above] sure sounds like socialism…but MMT is not socialism – not by a long shot. MMT’ers don’t necessarily believe in taxing the wealthy and redistributing it to the poor…[although] they do believe the way conventional economics and politicians think about money is wrong.

I know it seems insane to think about the government as not having to worry about deficits and debts. It doesn’t seem to make sense…but here is another way to think about it. If you have an economy with underused capacity, having the government spend on infrastructure or other societal useful endeavors is actually raising the total GDP of the country…MMT’ers argue that by not spending now, we will be harming our productive capacity in the future. Ultimately it makes no sense to have economic capacity sitting fallow because of a self-imposed worry about paying back a debt that is denominated in an asset that only the government can create. But, but, but… won’t that create inflation? Yup! Darn right it will, and that’s the point. MMT’ers believe that inflation is the only true constraint a government faces…

The public has woken up to the fact that supply-side-trickle-down economics is not helping them anywhere near as much as promised [and that, in fact,] monetary stimulus with fiscal austerity doesn’t do anything except make the rich richer…MMT is a novel, ambitious, and a little bit scary, I get it, but young people aren’t afraid of trying something new. They know the system isn’t working and are desperately looking for an alternative. I think they found it in MMT…

What does this mean for your portfolio?

…I have lots of worries that under MMT inflation would quickly rise and before too long, the government would be forced to cut back it’s spending…Therefore:

Ben Hunt had an interesting piece in his excellent blog Epsilon Theory titled, “Modern Monetary Theory or: How I Learned to Stop Worrying and Love the National Debt”. [Check it out!]

I will leave you with two quotes. One from Ben Hunt and one from Stephanie Kelton. They sum up the battle that will soon envelop the political and financial landscape. 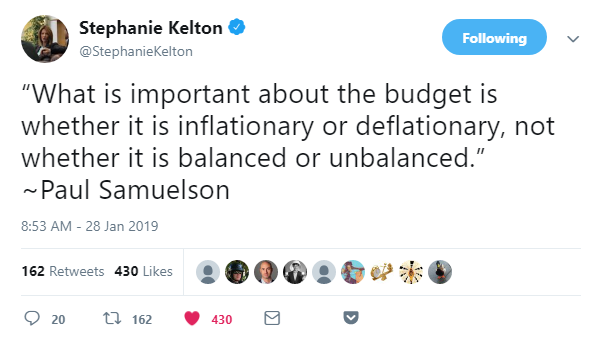 The above summary of the original article has been edited ([ ]), restructured and abridged (…) by Lorimer Wilson, editor of munKNEE.com, for a 65% faster – and much easier – read. The author’s views and conclusions are unaltered and no personal comments have been included to maintain the integrity of the original article. Furthermore, the views, conclusions and any recommendations offered in this article are not to be construed as an endorsement of such by the editor. Please note that the previous sentence must be included in any article re-posting to avoid copyright infringement.

Share
Previous What Are the Implications of Long-Term Rates Dropping To 0%?
Next A Crash of the Financial & Monetary System Seems Inevitable. Here’s Why & How to Prepare (+3K Views)