Understanding what we are facing right now is critical to our survival…. [and to do so] we must embrace a global correlation approach to comprehend the true global implication of how capital moves. [Martin Armstrong provides a remarkable explanation of what is going on right now with the U.S. dollar, bond yields and the current price of gold. It would be well worth your time to read and reflect on what he has to say.] Words: 822

So says Martin Armstrong (www.armstrongeconomics.com) in edited excerpts (822 words) of his most salient comments from his original extended article* of 2,078 words.

Armstrong goes on to say, in part:

The Flight-to-Quality is NOT Over – Yet!

Below is a monthly chart of the US 30-year Treasury bond and the pattern is very clear. The flight-to-quality is not yet over.

Gold is NOT Ready for Prime Time – Yet!

I have been warning gold was not ready yet for prime-time. Here we are on the edge of Europe being torn apart at the seams, socialists taking control of the battlements, inflation appearing likely, yet gold retreats. [Why? Because] Phase ONE of a Sovereign Debt Crisis is international capital flight-to-quality from one currency to the next.

The U.S. Dollar Rises Initially in a Sovereign Debt Crisis Then…

I have warned that the USA would be last to go – not the first -….because it is the core economy being both the largest as well as the reserve currency. I have warned that this will not collapse into dust all at the same time. Each link will break one at a time cascading like dominoes. This is not my ‘opinion’ – it is ‘history’.

Below is a chart of the U.S. dollar during this chaotic period of the Sovereign Debt Crisis of 1931. Note that: 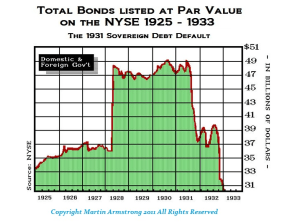 Capital Attraction and the Flight-to-Quality

What the US and German authorities fail to understand is we are dealing with a bell curve and not a linear progression. There has to be balance between austerity and stimulation. It is like heat and cold. Both extremes will kill you. We survive in the middle.

It is true that rising interest rates can attract capital. However, when capital flees, interest rates continue to rise due to the shortage of capital…[and it] goes to government debt because it is liquid and can absorb vast amounts.

The flight-to-quality is at the core of capital flow for it represents the first criteria in how capital moves between Public and Private assets [as clearly illustrated in the chart below]. 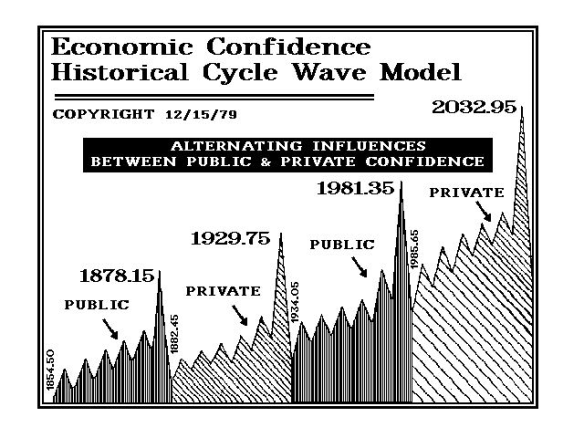 The flight-to-quality… is unleashed whenever confidence in the private assets collapses. Investors panic, sell private assets, and rush to government bonds driving interest rates down sharply. During the 2007-2009 crises, interest rates in the USA virtually went to zero. In other words, people were willing to accept no interest just to park their cash in a safe place they saw as government assets when they feared even banks would not survive….

During a generational Private Wave, investment and speculation become common place. During a Public Wave, private assets are looked upon as risky and the safer bet is to invest and trust government.

The official reasoning behind the nationalization of gold, however, was grounded in the collapse of confidence in both Public and Private assets creating hard times that had caused people to hoard gold. This trend further shrunk the available money supply reducing the velocity of money circulation decreasing economic growth….

Understanding what we are facing right now is critical to our survival. We must understand that forecasting a single market in isolation is asking for disaster. To comprehend the true global implication of how capital moves, we must embrace a global correlation approach…

*http://armstrongeconomics.com/693-2/2012-2/manipulating-the-world-economy-or-just-understanding-how-it-really-functions/  (To access the above article please copy the URL and paste it into your browser.)

For those who think bonds are a safe place to be, you might want to reconsider. In addition to rising sovereign risk (yes, for the U.S. as well as other countries), there is interest rate risk….[should you not] hold it to maturity. If interest rates rise, then the value of your bond falls (Bonds can produce capital gains/losses, just like stocks.) and the possibility of interest rates rising is pretty good. Words: 530

2. This New ‘Peak Fear’ Indicator Gives You an Investment Edge

In proclaiming buy-and-hold investing to be dead, the pseudo-experts masquerading as financial advisors have abandoned the fundamental principle of investing: buying undervalued assets – and then giving those assets the time necessary to mature. Instead, these charlatans have forced their clients to become short-term gamblers. Worse still, they are now consistently steering their clients toward the worst possible asset-classes, stocks and bonds, rather than the best ones [simply because they do not] understand the fundamental conceptual difference between risk and volatility. In a market populated by panicked lemmings, we cannot avoid volatility. However, we can and must reduce risk – which begins by building an allocation of history’s true safe haven asset, precious metals. [Let me explain more about what risk and volatility are and are not.] Words: 1080

Share
Previous Embry: U.S. Fed Managing the Markets In Anticipation of QE3 Launch?
Next The Euro System is Doomed and the End Will Look Like This