Martin Armstrong sees a peak in bond prices by October 1st, 2015 and a

low in interest rates from that point forward – a “Sovereign Debt Big Bang” – and, as the defaults begin to materialize over the following 2 years, a run-up in stocks for safety with interest rates rising along with share prices. Below are excerpts from Armstrong’s blog complete with notable charts of his Economic Confidence Model.

The above comments, and those below, have been edited for the sake of clarity and brevity to provide a fast and easy read and have been excerpted from an article* by Jason Tillberg (economyofthehome.com) originally posted on SeekingAlpha.com under the title Why Martin Armstrong Predicts Major Sovereign Debt Crisis Beginning October 1, 2015  and which can be read in its unabridged format HERE.

Below is a slide from a presentation Martin Armstrong gave in 1998 [and included in a June 15th: blog post] in which he forecast a “Sovereign Debt Big Bang” beginning on October 1st, 2015 [and peaking in 2017] along with other forecasts that have mostly all come to fruition.

By sovereign debt, he means debt issued by governments, be it municipal, state and local debt to debts of entire countries. The Puerto Rico default is one such example.

In a blog post about the coming sovereign debt crisis on June 18th he wrote about the 86 year cycle being a major factor in arriving at the October 1, 2015 date saying that the number 86 comes from the number Pi which is 3.141. 3,141 days is 8.6 years and 86 is simply 8.6 times 10. Armstrong’s premise is that history repeats because the passions of man remain the same. 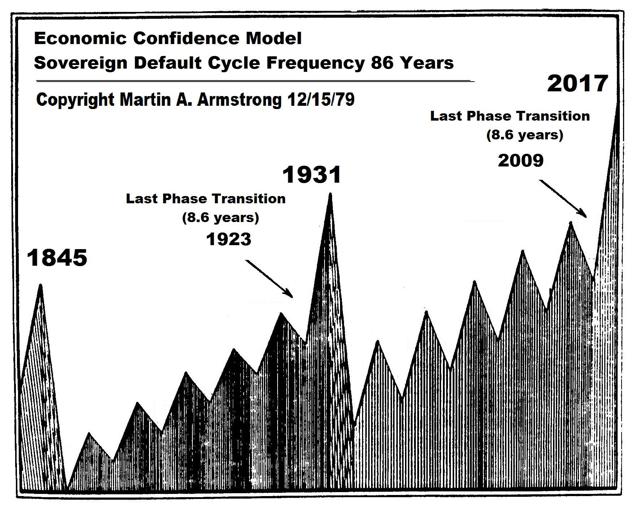 As Armstrong wrote this past March 26th, “during the 1931 Sovereign Debt Crisis the dollar rose sharply and we are seeing this right now internally as well within Europe. As fear rises that the Euro will collapse, capital is shifting to Germany driving the bunds to historic highs and the DAX to highs” and included a chart of the U.S. Dollar Index showing how the dollar rallied substantially against other currencies in the initial aftermath of the Creditanstalt failure (The failure of  Austria’s largest commercial bank by far, holding more than half of all Austrian bank deposits, the Creditanstalt Bank in Vienna, stunned the world. Today we would call the Creditanstalt too large to fail.). 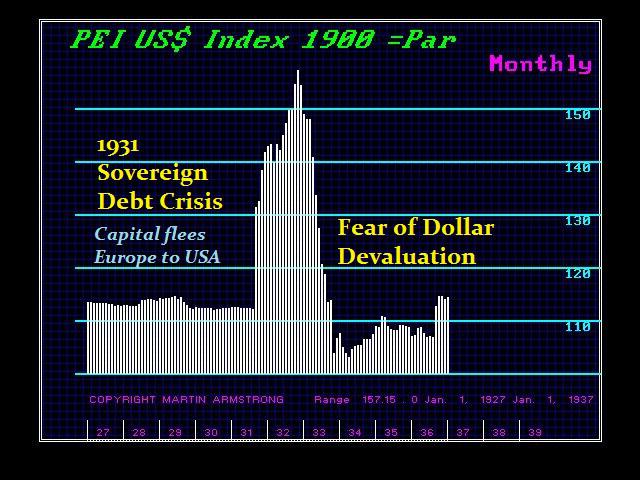 On August 6, Armstrong wrote about the next 2 months leading up to October 1st, saying: “The next two months going into September will be both interesting and critical. The NASDAQ Composite made new highs in July, but the S&P500 and the Dow Jones Industrials failed to exceed May highs. The general consensus is that there will be a rate hike in September and another in December, so if we back-off from this point we may see the share market react in anticipation to the downside. This would help send cash running into the short-term government paper, making that final peak in price (low in interest rates). Thereafter, we may see the ultimate confusion as stocks rise with rising interest rates, as they did between 1927 and 1929.”

What Armstrong sees happening by October 1st, is a peak in bond prices and a low in interest rates from that point forward. The correction we’re now seeing in stocks is reflecting that exactly as forecasted as investors sell shares and buy bonds.

If this all plays out as planned over the next 5 weeks, once the bond prices peak (yields bottom), as the defaults begin to materialize over the following 2 years, money may well run to stocks for safety and, as Armstrong suggests, interest rates will rise along with share prices in 2016 and in 2017 confusing many…

It seems prudent, given this forecast, to have some cash on hand.

The Great Financial Crisis of 2007-9 is now transcending into the Great Financial Catastrophe which could very well involve a total reset – or more likely a collapse – of the world economy, financial system and world political system. Here’s why.

2. Biggest Speculative Bubble Ever Will Begin To Implode This Autumn. Got Gold?

This coming autumn we are likely to experience the beginning of the end to the biggest speculative bubble in world history. All bubble assets will implode and the financial system will come under massive pressure.

3. Bursting of Bond Bubble Will Make 2008 Stock Market Crisis Look Like A Picnic!

Many investors think that we could never have a crash like the melt-down in 2008 but they are wrong. The 2008 Crisis was a stock and investment bank crisis – but it was not THE Crisis. That will happen when the biggest bubble in financial history – the epic Bond bubble – bursts. Let me explain.

4. When the Bubble Bursts It Will Cause Deflation & Drive Widespread Social Unrest – Here’s Why

Should we be concerned when tepid economic growth and low inflation are accompanied by increasing public and private debt? Are we borrowing just to stay alive? [As I see it,] national governments will increase national debt loads in order to stay in power until one or more of them default. Then their will be financial panic which will most certainly be deflationary. Here’s why.

There is too much debt. Debt works the same way for a country as it works for an individual or a family, which is to say if you borrow too much, then your life basically craters. Everything gets harder to do, and you end up doing things in order to deal with your past mistakes that you would never do normally. You start trying absolutely crazy things, and that’s where the world’s governments are right now. We are doing all these things that are essentially con games and getting away with it so far, because a printing press is a great tool for fooling people. I don’t see how we can get away with it too much longer.

6. Now Underway: A Spiral of Debt Deflation Into a Bottomless Economic Abyss!

von Mises once said, “There is no means of avoiding the final collapse of a boom brought about by credit expansion. The alternative is only whether the crisis should come sooner as the result of a voluntary abandonment of further credit expansion, or later, as a final and total catastrophe of the currency involved” and just that is happening before our very eyes. Words: 2242

Share
Previous Are These Views Of the Economy Fear Mongering OR Insightful? You Be the Judge (+2K Views)
Next Rickards, Roubini, Sinclair et al On the Future Of Gold & Silver (+3K Views)