yesterday puts the June year-over-year inflation rate at 1.66%, which is less than half the 3.82% average since the end of the Second World War. That being said the ShadowStats Alternate annualized rate of inflation is 9.26%. [Which is more accurate?] Words: 384

So says Doug Short (www.advisorperspectives.com) in edited excerpts from his original article* as posted on Seeking Alpha.

The Bureau of Labor Statistics (BLS) has compiled CPI data since 1913, and numbers are conveniently available from the FRED repository (here). My long-term inflation charts reach back to 1872 by adding Warren and Pearson’s price index for the earlier years….This look further back into the past dramatically illustrates the extreme oscillation between inflation and deflation during the first 70 years of our timeline. 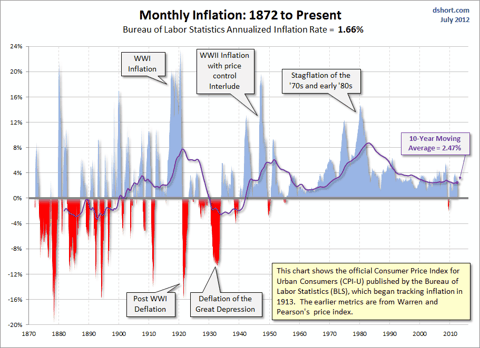 The chart below includes an alternate look at inflation *without* the calculation modifications the 1980s and 1990s (Data from www.shadowstats.com) and shows a ShadowStats Alternate annualized rate of inflation is 9.26% 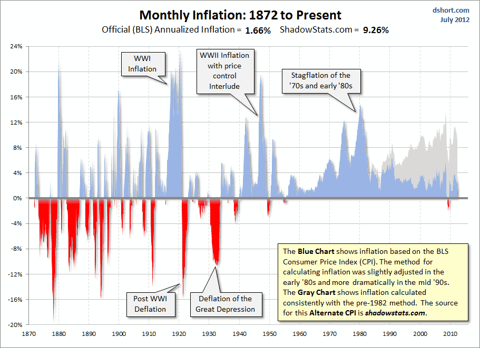 On a personal note, the more I study inflation the more convinced I am that the current BLS method of calculating inflation is reasonably sound. As a first-wave Boomer who raised a family during the double-digit inflation years of the 1970s and early 1980s, I see nothing today that is remotely like the inflation we endured at that time.

Moreover, government policy, the Federal Funds Rate, interest rates in general and decades of major business decisions have been fundamentally driven by the official BLS inflation data, not the alternate CPI. For this reason, I view the alternate inflation data as an interesting, but ultimately useless statistical series.

That said, I think that economist John Williams, the founder of Shadow Government Statistics, offers provocative analysis on a range of government statistics. While I do not share his hyper-inflationary expectations, at least not based on current economic conditions, I find his skeptical view of government data to be filled with thoughtful insights.

For independent evidence that the Consumer Price Index is a reasonably accurate representation of the prices we pay, see the MIT Billion Prices Project US Daily Index.

* http://seekingalpha.com/article/728341-a-long-term-look-at-inflation?source=email_macro_view&ifp=0  (To access the above article please copy the URL and paste it into your browser.)

2. Once Inflation Starts There Will Be NO Stopping It!

3. James Turk Interviews Robert Prechter: Which Will It Be – Hyperinflation or Massive Deflation?

6. High Inflation is Coming but Hyperinflation is Highly Unlikely – Why is That?

8. Deflation is Starting to Show Up; Can Hyperinflation Be Far Behind?

A look at the status of the economy, and in particular money supply, shows that deflation is starting to show up. Below are 7 charts that support that view. Words: 370

9. Will the Current Whiff of Deflation Bring 2008 All Over Again?

You don’t need [actual] deflation—a reduction in the outstanding supply of money—to have markets react to a decrease in the rate of money supply growth…, anticipate the eventual deflation [and begin to price it into the market. Remember 2008?] Oil prices fell from $147 in July of 2008 to $33 per barrel by early 2009. The S&P 500 went into free-fall starting in September of 2008 and bottomed out in March of 2009—falling almost 50% in six months. This is what has already happened to the gold mining sector but, remember, central banks may be on a counterfeiting holiday right now but they have a history of taking very short vacations.

11. A Look at Inflation Specifics Over the Past 5 Months

Core CPI [continues to rise, remaining] above the Fed’s inflation target of 2%. [That being said,] how inflation is impacting our personal expenses depends on our relative exposure to the individual components. [Let’s take a look at the specifics.] Words: 291

12. Slicing & Dicing Consumer Price Index Data of the Past 11 Years

14. The CPI, TIPS and Protecting Yourself From Inflation: What You Need to Know

15. Environment is Inflationary, NOT Deflationary – Here’s Why

Share
Previous Nick Barisheff: Make Sure You’ll Actually OWN the Gold Bullion Before You Buy – Here’s Why and How (+2K Views)
Next Still NO Housing Bubble in Canada – So What Will Cause Prices to Finally Correct?