A Disaster of Unprecedented Proportions Is Coming Sometime This Decade and It Will Be Irreversible! (+3K Views)

“The end of the 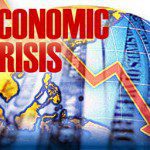 world as we know it” is what David Korowicz predicts is coming sometime this decade – an “ultimate” crash that will be irreversible – TEOTWAWKI! Words: 1395

So says Kurt Cobb (www.resourceinsights.blogspot.ca) in edited excerpts from his original article*.

Cobb goes on to say, in part:

David Korowicz is a thoughtful, knowledgeable, analytical, caring man – a physicist turned risk consultant – who sees the system as nothing more than a house of cards waiting to be blown down by the next financial hurricane that comes its way. Why? Because the system’s interlocking intricacies make it vulnerable not only to severe disturbance, but also to cascading failures that might end in a system unable to recover its former complexity and global reach, in other words, TEOTWAWKI.

Korowicz rightly depicts our global system, financial and logistical, as extremely complex, but not so complex that he cannot understand it enough to predict a disaster of unprecedented proportions sometime this decade.

While he acknowledges the remarkable resilience and self-healing our current global system has shown in the face of repeated insults in the last several decades, especially the crash of 2008 he outlines in a new report why he believes that that resilience has been significantly eroded and may well be tested to the breaking point in the next several years.

It comes down to this: Complex interdependencies mean that a few critical points of failure could bring down the entire global system, namely:

1. Concentrated Banking System: Korowicz focuses on the banking system in which power and money have become highly concentrated. Reliable payment systems are what make worldwide trade and logistics possible. If trust in those systems breaks down (as it did at the end of 2008) and can’t be restored, that’s it for the global trading system. He cites other systems as well including our system of industrial production in which the just-in-time inventory model has been so broadly implemented that manufacturing and many services can grind to a halt within only a few says of a supply disruption.

2. Sputtering Credit Creation: Historically unprecedented indebtedness among households, businesses and governments has caused private credit creation, on which the growth of the global economy depends, to sputter. Those who can borrow don’t want to for fear that the economy may continue to be sluggish, threatening their jobs or businesses. Those who are too indebted to borrow more are focused on repaying debt or simply deciding to default. We are in a debt deflation that threatens the very stability of the worldwide financial system which is exposed to so many bad or potentially bad loans.

3. Lack of Policy Flexibility: With interest rates near zero in much of the world and governments overloaded with debt taken on from failing sectors of the economy, mostly banks and housing, there is little flexibility for policy action if another severe shock hits the global economy as Korowicz expects.

4. Disproportionate Reaction to Crises: Our current system is now structured to respond not proportionally to any shock, but with increasing acceleration and with consequences that seem outsized given the initial insult. Think Greece.

5. Outdated Economic Models: The economic models that policymakers are using are based on very narrow conditions experienced since the end of World War II and don’t take into account the extreme stresses now evident in the world economy. Such models have so far failed to explain the severity of the crash (which they did not anticipate) and the persistence of a subpar recovery despite historically unprecedented stimulus, both fiscal and monetary. Nor have these models resulted in policies that have effectively addressed the fragility of both the financial and physical economy.

6. Global Contagion: Previous shocks–the Asian crisis of 1997, the Argentine collapse, Japan’s long slump–have all been in the context a functioning world economy, strong elsewhere and able to give a lift to the countries battered by financial collapse or stuck in economic malaise. The next big crisis, Korowicz believes, may envelope the entire global economy or enough of it so that there will be no stable center that affected countries can rely on to trade with as they repair their economies.

7. Inconsistent Economic Growth: Resource constraints, particularly an evident plateau in the worldwide rate of oil production from 2005 onward, is challenging the growth paradigm upon which all of our major systems are premised. These systems, financial and otherwise, are designed to be stable under conditions of persistent growth. Without that growth, their stability is unlikely to hold up. One example is the banking and credit system that depends on consistent economic growth to allow repayment of loans. That growth in turn depends on expanding energy supplies crucial to economic activity.

The Collapse Will Be Irreversible – TEOTWAWKI

Perhaps the most disturbing conclusion Korowicz comes to is that the kind of collapse he envisions will not be reversible because:

Essentially, there is a point of no return that could put the world economy into a new equilibrium that is far less networked and global than it is today and from which it will be all but impossible to return.

Government officials have made Herculean efforts (with public money, of course) to keep the world’s financial system going – but they have only given it stimulants, when what is needed is surgery. Naturally, those who control both the financial system and the politicians who regulate it are resisting that surgery since it would make them less rich (even if it would save them and us by making the system more stable).

Hence, Korowicz writes: “Our immediate concern is crisis and shock planning. It should now be clear that this is far more extensive than merely focussing on the financial system. It includes how we might move forward if a reversion to current conditions proves impossible.” While he doesn’t offer a set of responses in this paper, he promises to discuss them in his future writings.

While much of Korowicz’s analysis is compelling and nuanced, I can’t help but think he is overestimating the possibility of a wrenching collapse….

I am willing to admit that even the sturdily built facsimile which I examined at the gallery could eventually be struck, rattled, cut, burned (with a torch perhaps), or otherwise have it’s integrity undermined and, as a species, we certainly seem be doing all we can to undermine the systems upon which we depend.

[That being said,] the global system has shown both its vulnerabilities and its resilience. The people who rely on it–rich and powerful people–have not and will not sit still and do nothing as successive shocks from financial panic or resource depletion or war threaten its integrity. These people will fight and probably succeed at averting a total collapse in the medium term. That’s what happened in late 2008 and early 2009 – and, that’s what will likely happen many times more as the vaunted global system stairsteps its way to lower complexity.

People will be telling us at each step of the way down toward lower complexity that things will return to “normal” any day now if we are just patient and have faith. That will frustrate those of us who believe rapid transformation is inevitable and that we would do well to plan for it – but, don’t look for that frustration to abate anytime soon.

*http://www.resourceinsights.blogspot.ca/2012/08/how-cascading-failures-in-global.html (To access the above article please copy the URL and paste it into your browser.)

1. Are Preparations Being Made For Worldwide Financial Collapse?

2. Don’t Ignore the Coming Financial Storm – It IS Coming and Here’s How to Get Prepared

3. Nothing Can Be Done to Avoid Coming World-wide Depression! Here’s Why

4.  The Ultimate Fear Mongering Video – or the Ultimate in Insights, Forecasting & Sound Advice? You Be the Judge

Warning: New evidence points toward an imminent financial collapse and the destruction of American wealth. Income, investments, retirement, and even personal safety are now at severe risk. In this new video I lay it all out for you. Words: 515

Share
Previous What's Coming: A "Fiscal Meat Grinder," A "Fiscal Cliff" and a Potential "Major Market Meltdown"!
Next George Soros' Speech on the Euro Crisis Has Gone Viral For Good Reason – It's Brilliant