It is Imperative to Save in Physical Gold Not Stocks or Bonds! Here's Why

Lorimer Wilson December 25, 2011 Comments Off on It is Imperative to Save in Physical Gold Not Stocks or Bonds! Here's Why 2,345 Views 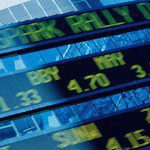 past decade actually fared when their performance was measured in gold instead of dollars. You will be shocked at how poorly they (and you?) have really done and you, too, will come to the conclusion that –  investing in the stock market is for losers. Words: 790

So says Jeff Clark (www.caseyresearch.com) in edited excerpts from his original article* entitled Start Thinking in Terms of Gold Price.

Lorimer Wilson, editor of www.FinancialArticleSummariesToday.com (A site for sore eyes and inquisitive minds) and www.munKNEE.com (Your Key to Making Money!) has edited ([ ]), abridged (…) and reformatted (some sub-titles and bold/italics emphases) the article below for the sake of clarity and brevity to ensure a fast and easy read. The report’s views and conclusions are unaltered and no personal comments have been included to maintain the integrity of the original article. Please note that this paragraph must be included in any article re-posting to avoid copyright infringement.

Clark goes on to say, in part:

Someday, we (or our heirs) are going to spend some of the wealth we are accumulating [but] how much we can actually buy with our gains will directly depend on how hard inflation has hit whatever our investments are denominated in. The only reliable way to measure the value of investments [in real terms, that is, adjusted for inflation,] is to [look at how well our investments would have done had they been denominated in gold instead of dollars. It is the only] way investors can tell how they’re [really] doing…and, since most people don’t adjust for inflation, their investments are not doing as well as they think.

Re-Indexing in Gold Changes Everything

To demonstrate the effect of currency dilution, we’ve developed a tool for re-indexing popular indices from dollars to gold. Doing so provides a more accurate picture of the dilution of investments made in dollars (and would work just as well in euros or other currencies). We use gold in grams so the indices won’t be priced in decimals. 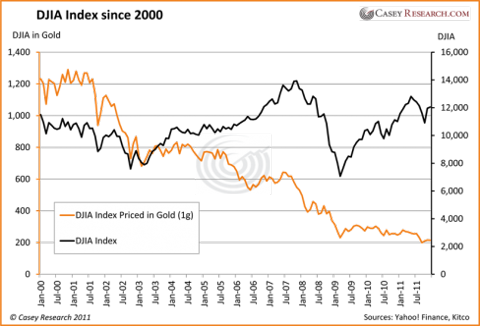 While the Dow Jones Industrial Average is up 4.7% in dollar terms, it’s lost 82.5% when measured in gold grams. An investment of $10,000 on January 1, 2000 would total just $10,470 today (excluding dividends) – but in gold it’s worth only $1,750. In other words, investments made in the DJIA Index have not only lost money in real terms, they’re worth a pittance when measured in gold. This is a breathtaking loss. 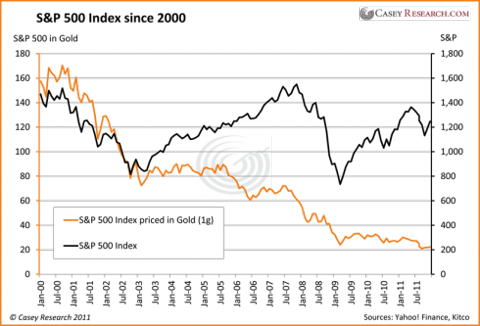 The S&P 500 is down 15.1% in dollars since 2000, but it’s lost 85.8% against gold. If you’ve owned an S&P index fund, you not only have fewer dollars that what you started with (excluding dividends) but have fallen dramatically behind when compared to the monetary asset of gold. 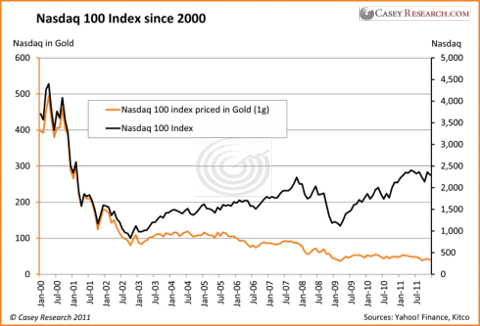 Tech stocks show a whopping decline of 38% in dollars over the same time period, but money invested in that sector has lost 89.7% when measured in gold grams. 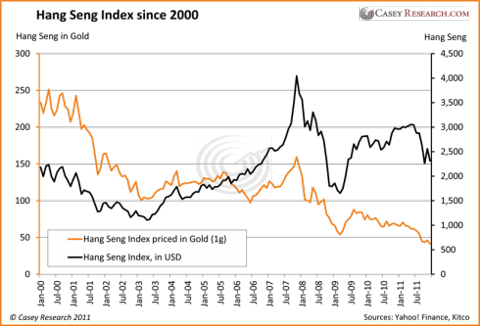 The stock market for Hong Kong, one of the largest exchanges in Asia, shows an increase of 6% in dollars. However, it’s lost 82.3% when priced in gold. 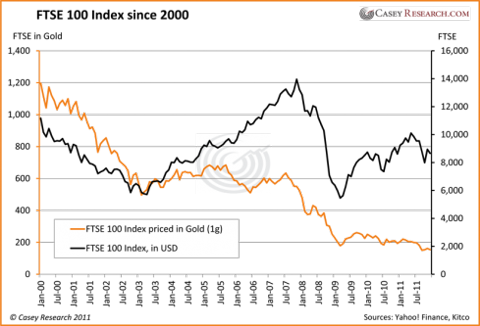 Measuring portfolios in dollars exaggerates performance in real terms. This isn’t to say that one shouldn’t invest in stocks. It means that one must:

Someday we’ll want to spend the gains we’re making [so] how…[can] we avoid the long-term erosion of the currencies we invest in? The answer is simple: save in gold. The dollars you keep in a money-market account will steadily lose value year after year. In fact, monies deposited into a simple savings account in 2000 have lost an incredible 25% of their purchasing power since then. Conversely, if those savings were denominated in gold, the wealth would have not only been preserved but increased. We believe this trend will continue – and accelerate.

It will become increasingly important to your financial future that you cash in earnings from time to time and save them in precious metals – not in dollars, euros, yen, yuan, or even Swiss francs. Save in gold. That new car or retirement home or world travel you want to spend money on someday will be a lot easier to afford if your savings are denominated in the one asset that can’t be debased, devalued or destroyed.

2. Inside The Consumer Price Index: What Inflation Really Means To You

The Fed justified the last round of quantitative easing “to promote a stronger pace of economic recovery and to help ensure that inflation, over time, is at levels consistent with its mandate”. In effect, the Fed is trying to increase inflation, operating at the macro level but what does an increase in inflation mean at the micro level — specifically to your household? [Let’s take a look.] Words: 1555
3. Any Way You Look At It – Inflation Is On The Rise!

We can make some inferences about how inflation is impacting our personal expenses depending on our relative exposure to the individual components [and any way you look at it inflation is on the rise – so let’s take a look at the particulars.] Words: 769
4. Higher Lumber Costs Today = Higher Housing Costs Tomorrow = Higher Inflation in 2012/13

5. Environment is Inflationary, NOT Deflationary – Here’s Why

While it is true that the average consumer isn’t (and won’t soon be) spending as much as he used to, it’s not because he’s waiting for bargains. No, it’s because he’s out of credit, he’s unemployed, his house, car, motorcycle, boat, and plasma television have all either been repossessed or foreclosed upon, and his wife just left him. He’s not exactly in the mood for shopping. He’s not waiting for bargains. He’s waiting for a miracle – and I don’t think they sell those at the mall. Words: 1582
6. The CPI, TIPS and Protecting Yourself From Inflation: What You Need to Know

Many investors are worried about inflation and, as a result, are considering buying inflation indexed bonds and other inflation protected investment vehicles. They may be setting themselves up for significant losses, however, because of the way the government is now calculating the CPI, and the further changes being proposed. In the opinion of this writer, the CPI calculation appears to be inaccurate and, as a result, such investments may not be appropriate inflation hedges. [Let me explain.] Words: 1533
7. Real-time Inflation Data is Now Available – Finally

Inflation is a significant measurement for the economic health of countries around the world but rates are often reported weeks after data is collected. To address this problem, two professors at MIT Sloan School of Management have launched the Billion Prices Project which is the first website to publish daily price indexes and provide real-time inflation estimates around the world. Words: 825
8. These Indicators Say Inflation to Go to 4% Soon – and 6% by 2014

9. Global Money Printing Is A Recipe For A Global Economic Nightmare

If the U.S. dollar is being devalued so rapidly, then why does it sometimes increase in value against other global currencies? It is because there are times when one particular global currency will fall faster than the others but the reality is that they are all being rapidly devalued. As the 6 charts below illustrate, the UK, the EU, Japan, China and India, as well as the U.S., have all been printing money like there is no tomorrow. Unfortunately, this is a recipe for a global economic nightmare. Words: 1102

Share
Previous Gold Bullion, Stocks or Bonds: Which Have More Long-term Investment Risk?
Next It's ALL Here! Why Gold is Declining and What the Future Holds