Inside The Consumer Price Index: What Inflation Really Means To You

Lorimer Wilson September 15, 2011 Comments Off on Inside The Consumer Price Index: What Inflation Really Means To You 2,836 Views

The Fed justified the last round of quantitative easing “to promote a stronger pace of economic recovery and to help ensure that inflation, over time, is at levels consistent with its mandate”. In effect, the Fed is trying to increase inflation, operating at the macro level but what does an increase in inflation mean at the micro level — specifically to your household? [Let’s take a look.] Words: 1555

So says Doug Short (www.advisorperspectives.com)  in an article* which Lorimer Wilson, editor of www.munKNEE.com (Your Key to Making Money!), has further edited ([  ]), abridged (…) and reformatted below  for the sake of clarity and brevity to ensure a fast and easy read. The author’s views and conclusions are unaltered and no personal comments have been included to maintain the integrity of the original article. Please note that this paragraph must be included in any article re-posting to avoid copyright infringement. 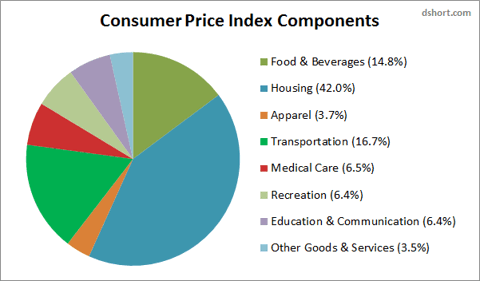 The slices are listed in the order used by the BLS in their tables, not the relative size. The first three follow the traditional order of urgency: food, shelter, and clothing. Transportation comes before Medical Care, and Recreation precedes the lumped category of Education and Communication. Other Goods and Services refers to a bizarre grab-bag of odd fellows, including tobacco, cosmetics, financial services, and funeral expenses. For a complete breakdown and relative weights of all the subcategories of the eight categories, see the link to table 1 near the bottom of the BLS’s monthly Consumer Price Index Summary.

The chart below shows the cumulative percent change in price for each of the eight categories since 2000. 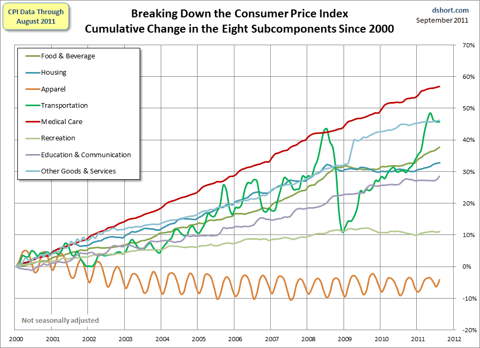 Not surprisingly, Medical Care has been the fastest growing category. At the opposite end, Apparel has actually been deflating since 2000. Another unique feature of Apparel is the obvious seasonal volatility of the contour.

Transportation is the other category with high volatility — much more dramatic and irregular than the seasonality of Apparel. Transportation includes a wide range of subcategories. The volatility is largely driven by the Motor Fuel subcategory. For example, the spike in gasoline above $4-a-gallon in 2008 is readily apparent in the chart.

The Ominous Shadow Category of Energy

The BLS does not lump energy costs into an expenditure category, but it does include energy subcategories in Housing in addition to the fuel subcategory in Transportation. Also, energy costs are indirectly reflected in expenditure changes for goods and services across the CPI.

The BLS does track Energy as a separate aggregate index, which in recent years has been assigned a relative importance of 8.553 out of 100. In other words, Uncle Sam calculates inflation on the assumption that energy in one form or another constitutes about 8.55% of total expenditures, about half of which (4.53%) goes to transportation fuels — mostly gasoline. The next chart overlays the highly volatile Energy aggregate on top of the eight expenditure categories. We can immediately see the impact of energy costs on transportation. 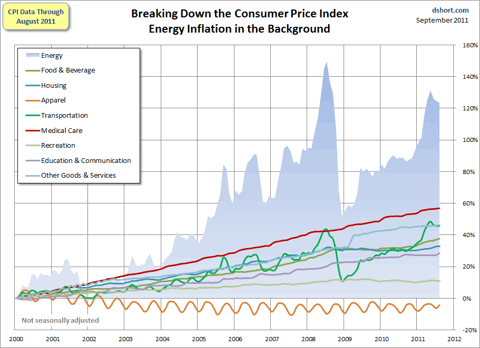 The next chart will come as no surprise to families footing the bill for college tuition. Here I’ve separately plotted the College Tuition and Fees subcategory of the Education and Communication expenditure category. Note that the steady staircase in this cost matches the annual cost increases in late summer for each academic year. 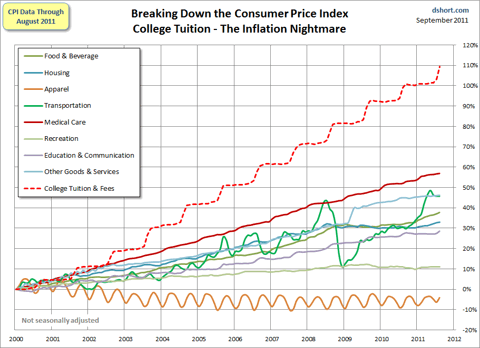 Economists and policy makers (e.g., the Federal Reserve) pay close attention to Core Inflation, which is the overall inflation rate excluding Food and Energy. Now this is a somewhat peculiar metric in that one of the exclusions, Energy, is an aggregate that combines specific pieces of two consumption categories: 1) Transportation fuels and 2) Housing fuels, gas, and electricity. The other, Food, is the major part of the Food and Beverage category. I should explain that “beverage” for the BLS means alcoholic beverages. So coffee and Coca Colas are excluded from Core Inflation, but Budweiser and Jack Daniels aren’t.

The next chart shows us the annualized rate of change (solid lines) and the cumulative change (dotted lines) in CPI and Core CPI since 2000. 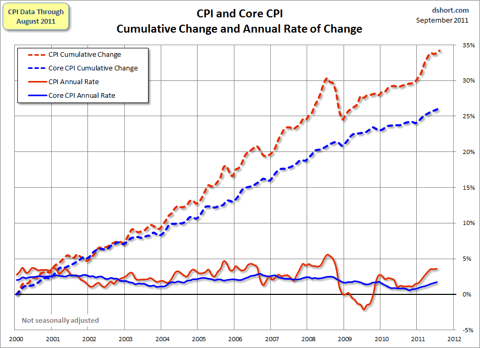 Consumers, especially those who’ve managed expenses over several years, are most closely attuned to the top line.

Inflation and Your Household

The universal response is to moan over price increases and take delight when prices are cheaper but in reality, households vary dramatically in the impact that inflation has upon them. When gasoline prices skyrocket, a two-earner suburban family with long car commutes suffers far more than the metro family with short subway commutes – and remember, Uncle Sam excludes energy costs from Core Inflation.

Households with high medical costs are significantly more vulnerable than comparable households with low expenses in this category.

The BLS weights College Tuition and Fees at 1.493% of the total expenditures. For households with college-bound children, the relentless growth of tuition and fees can cripple budgets. Often those costs get bundled into loans that saddle degree recipients with exorbitant debt burdens. Consider the following numbers from the CollegeBoard.com website:

Of course, Mr. Bernanke would point out that, with a healthy dose of Core Inflation (extended of course to wages), those debt-burdened college grads will pay down the loans with inflated dollars.

Which brings us back to the Fed’s efforts to manage the level of Core Inflation. At the macro level, Mr. Bernanke and his Federal Reserve team can doubtless make a theoretical argument for playing puppet master with inflation but will their efforts — ZIRP and Quantitative Easing — achieve the desired goal?

The one thing we can be certain about is this: an increase in inflation will have a painful effect on lower income households, those on fixed incomes, those with higher ratios of transportation costs, and any household whose discretionary spending is more dream than reality.

We can make some inferences about how inflation is impacting our personal expenses depending on our relative exposure to the individual components [and any way you look at it inflation is on the rise – so let’s take a look at the particulars.] Words: 690

3.  Environment is Inflationary, NOT Deflationary – Here’s Why

4.  The CPI, TIPS and Protecting Yourself From Inflation: What You Need to Know