The Rich are NOT Paying Their Fair Share of Income Tax

Over the last half century, the richest Americans have shifted the burden of the federal individual income tax off themselves and onto everybody else – dramatically!  At a time of national economic crisis, especially, they can and should contribute far more in taxes. [Let me show you the extent of this massive redistribution of wealth so you decide for yourself if this is, indeed, the case.] Words: 1140

So says Richard Wolff (www.guardian.co.uk) in an article* which Lorimer Wilson, editor of www.munKNEE.com,  has reformatted and edited […]  further for the sake of clarity and brevity to ensure a fast and easy read. Please note that this paragraph must be included in any article re-posting to avoid copyright infringement. Wolff goes on to say:

The first graph compares the official tax rates paid by the top and bottom income earners [over the years]. Note especially that from the end of the second world war into the early 1960s, the highest income earners paid a tax rate over 90% for many years. Today, the top earners pay a rate of only 35%. Note also how the gap between the rates paid by the richest and the poorest has narrowed. [When] we take into account the many loopholes the rich can and do use vs. the poor, the gap narrows even more. One conclusion is clear and obvious: the richest Americans have dramatically lowered their income tax burden since 1945, both absolutely and relative to the tax burdens of the middle income groups and the poor. 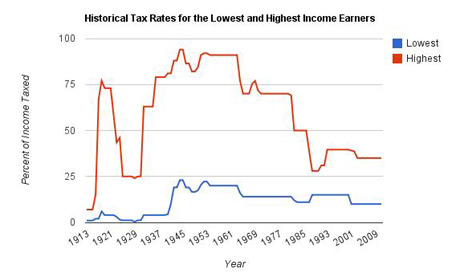 Consider two further points based on the above graph:

The lower taxes the rich got for themselves are one reason why they have become so much richer over the last half century. Just as their tax rates started to come down from their 1960s heights, so their shares of the total national income began their rise (see here for an excellent article discussing this).

As the two Wikipedia graphs below show, we have now returned to the extreme inequality of income that characterised the U.S. a century ago. The first graph shows share of national income taken by the top 1%, the top tenth of a percent, and the top 100th of a percent of individuals and families: the richest of the rich..

The Wealthy Perpetuate a Vicious Cycle to Their Benefit

Indeed, this cycle has been at work for years. [It works like this:]

So it goes – from Washington, to Wisconsin, to New York City.

The Rich Unsuccessfully Try to Justify the Record

How do the rich justify and excuse this record? They claim that they can invest the money they save from taxes and thereby create jobs, etc. – but do they? In fact, cutting rich people’s taxes is often very bad for the rest of us (beyond the worsening inequality and hobbled government it produces). Several examples show this:

Share
Previous America: The 42nd Most Unequal Country in the World!
Next Understanding Inflation: It's Here – and It's Going to Get Worse, Much Worse!