Lorimer Wilson June 25, 2016 Comments Off on Here’s A Winning Investment Strategy to Execute During A Market Sell-off 1,902 Views

…[Today’s article looks] at two poor (but popular) strategies that

investors employ during a crisis and one winning strategy that you can execute. Keep in mind that we’ll be discussing what investors could do during a sell-off, not what to do in anticipation of a sell-off during a bull market…

The comments above and below are excerpts from a lengthy article by The Traveling Investor which has been edited ([ ]) and abridged (…) to provide a faster and easier read.

This is the most obvious choice for investors during a time of crisis, and one that many investors choose to undertake. On the surface, this strategy is very simple. Sell when the market is falling (in anticipation of a further decline) – how hard can that be? The biggest problem is defining “when the market is falling.” Over the past year, we’ve experienced two big scares: August 2015 and February 2016. Both times, the index fell by more than 10% from peak to trough. Looking back, it’s easy to say that there would not have been a major crash, as they were merely “corrections.” However, how can we see the line that separates the two before we cross it? I don’t think that is possible. A 5% decline could easily evolve into a 10% drop, and a 10% drop could then result in a 20% decline.

Investors only think about selling (outside of liquidity needs) when the market has tanked already (or else it would be a crisis), meaning they’ve already missed out on a sizable portion of the “gains” (i.e., losses averted). Furthermore, it is extremely difficult for one to predict what will follow. For example, had an investor sold his or her portfolio when the market declined by 10%, but bought back when the market rose by 10%, he or she would have achieved the following performance (Green = buy, Red = sell) since 2015: 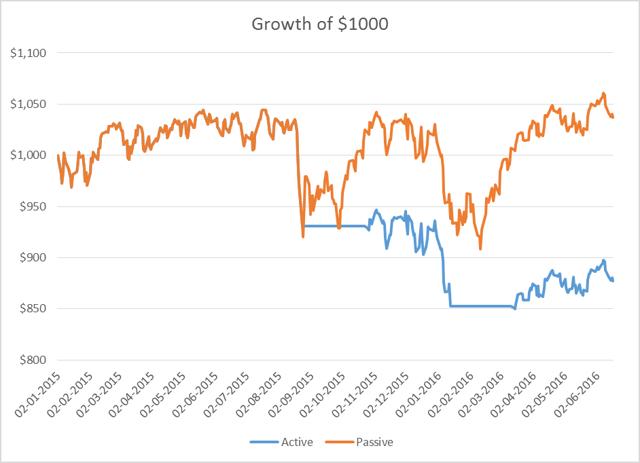 Evidently, nothing was gained, but everything was lost.

There are a variety of ways to hedge, but I’ll stick with options here, as most other forms of hedging strategies would constitute a sale, in my opinion (e.g., forwards, futures, CFDs, etc.). Within options, there are also a plethora of strategies, but today we’ll be focusing on the most common way to hedge the downside:

Options appear attractive for many reasons. Their big selling point is that you can pay a small amount of money upfront for downside protection and keep your upside open. However, those “small amounts” of money quickly add up. Let’s see how much options really cost.

Currently, a one-year put option on the SPY at a strike of 210 costs $17.67. Since the option is already in the money (SPY is currently at 206.52), we subtract the difference to get the real cost, which would be $14.19. This amount represents an annual cost of 6.9%! Of course, the premium fluctuates all the time depending on implied volatility (i.e., the VIX), but one thing we do know is that when it becomes evident that hedging is needed, options become expensive (everyone panics at the same time). In other words, you have to pay the most amount of money for downside protection when you desire it the most. I don’t think there will be any disagreement when I say that a 6.9% cost to hedge will be detrimental to your returns over the long run.

b) Hedge All the Time

There is another approach. Instead of only hedging when needed, you can hedge all the time. This effectively eliminates downside risk at all times. However, even under normal circumstances (i.e., in a calmer market), a one-year put option on the SPY would cost 4%.

Here’s what would’ve happened if you were lucky enough to buy hedges at 4% every year since 2009. A big discrepancy indeed. The unhedged portfolio outperformed by 27%. Of course, what happened after the recession was a bull market, so let’s take the long-term approach. 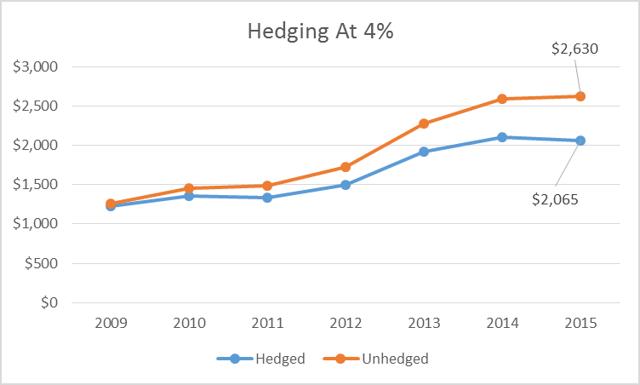 Let’s imagine what would happen in 30 years. The 30-year CAGR for the S&P 500 is around 11% including dividends. Keep in mind, this already includes the last two major crashes. For the sake of illustration, I’ve mixed in two more down years (at -30%) in the following chart. 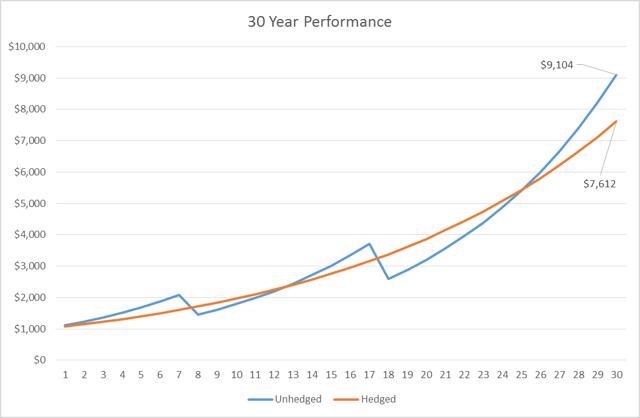 As you can see, despite two additional down years (doesn’t matter when they occur, since returns are multiplicative), the unhedged portfolio still handily beat the hedged portfolio. The hedged portfolio loses every time. Why? I think a good way to look at options would be to view them as a form of insurance. Imagine how much you could save if there were no auto insurance – you know you are a good driver! Similarly, you would be doing yourself a big favor by not hedging with options if you are a long-term investor.

This may be counterintuitive, but I believe that the best way to profit from a crisis is to embrace it –  by shifting the allocation in your own portfolio to more risky stocks. This is a time when many assets are tossed into the trash pile and left for dead, despite an excellent long-term outlook….What are risky stocks? You may want to look at sectors such as retail and consumer discretionary. Those are…sectors that would be severely impacted by an economic downturn, but would hugely benefit from the subsequent recovery.

The chart below compares the performance between retail and consumer discretionaries and the safer utilities and consumer staples. 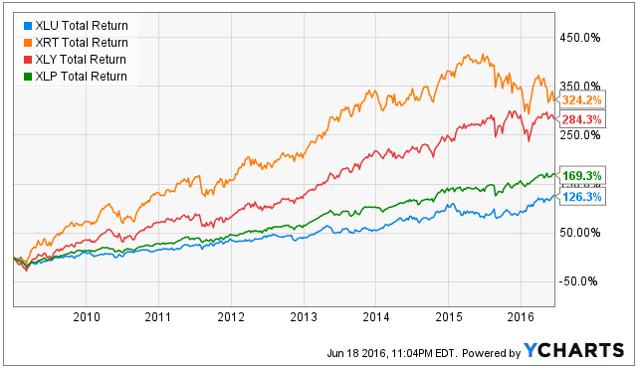 There is really no competition here. Even if you invested in 2008, you still would have come out on top with the more risky sectors. 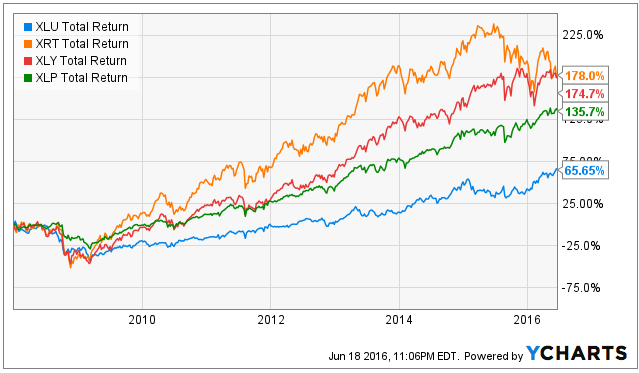 We’ve seen that the two most popular tactics (selling and hedging with put options) employed by investors during a time of crisis won’t help them over the long term. Surprisingly, by embracing volatility and shifting portfolios to more risky sectors, investors can outperform the market handily.

For the average investor, I believe sector rotation is the best available option. It’s cheap and easy. However, I believe dedicated investors do even better by picking out the best of the best. It’s a long process that often ends up in failure (I often throw an idea away after a week of research for the V20 Portfolio), but once you do find a gem, the rewards will be well worth it. To learn more about the V20 Portfolio (+40% in 2015), whose goal is to compound capital at 20% over the long term, I encourage you to read the introduction to my investment process. Premium subscribers get full access to the V20 Portfolio. Track the portfolio through the latest update, here.

Share
Previous Here’s An Alternative to ‘Mainstream” or “Doom & Gloom” Investing (+2K Views)
Next Could Brexit Be the Beginning of a Brave New World?