A tsunami doesn’t start with a bang, but with a whimper.  The first sign is a little hump in the water way out in the distance that is barely notable.  Anyone who catches a glimpse of it simply continues to expect the day to be the same as the last many days – calm and beautiful waters along the shore.  This is the point where we are, today in the Precious Metals sector. Many have seen the little roll of water out in the distance as Gold edged up in the first move of a more parabolic slope, yet most investors are mired in the same expectations of yesterday – a return for Gold to correct down into a lower base. Our analysis based on the fractal relationship to 1979  shows, however, that the mid 900s are a realistic target for the HUI by the end of the year or early in 2012; that $52 to $56 should be achievable for silver, with $58 to $62 as real possibilities; and that Gold should go the $2250 level followed by $2500 with the potential for $3,000, or a bit higher, now on the radar screen. Let me explain why that is the case. Words: 2130

So says Goldrunner in an article which Lorimer Wilson, editor of www.munKNEE.com (Your Key to Making Money!), edited for the sake of clarity and brevity to ensure a fast and easy read. The author’s views and conclusions are unaltered and no personal comments have been included to maintain the integrity of the original article. Please note that this paragraph must be included in any article re-posting to avoid copyright infringement.

As far as the PM bull goes, the vast majority of investors are still sitting on their hands – eyes glued to the television – as the global economic mess unwinds driving the Precious Metals (PM) from a little bump on the horizon to a 15 foot wall that will engulf them.  As with all tsunamis, the vast majority of investors will pause in wonder over the growing wave as it comes closer, but they will not take action until the PM wall is 15 feet high and coming right at them.  In reality, that huge PM wave will represent an unseen wave of devaluation of everything they own so eventually, like all tsunamis, the majority of investors will react – all at the same time.  Those late-comers to the PM sector will grab charts of Gold, of Silver, and of the PM stocks to see that so far in this PM bull prices have tended to correct back to the mean, so they will decide to wait for a steep correction to get in.  Yet, they won’t get a steep correction to their liking and will be forced to “chase” as the Gold parabola continues to accelerate to the upside.  It was much the same in the late 1970s.

As mentioned within the chart of the HUI Index below, we have now reached the inflection point where Gold has busted up and out of the rising channel that Gold has traded in since early 2009. As Gold takes a more parabolic route above the cost level of the Gold miners, we expect the Gold producers as represented by the HUI Index, to bust up and through the stiff resistance of its own channel line as represented by the pink line in the chart below. This is how the real PM stock bull presented in the late 70’s at the same fractal time and price relationship. We had anticipated the last important HUI double bottom at around the 100-week exponential moving average, and the price has now broken out to the upside confirmed by break-outs in the RSI and the MACD with all the moving averages turning up. It just doesn’t get any better than this! 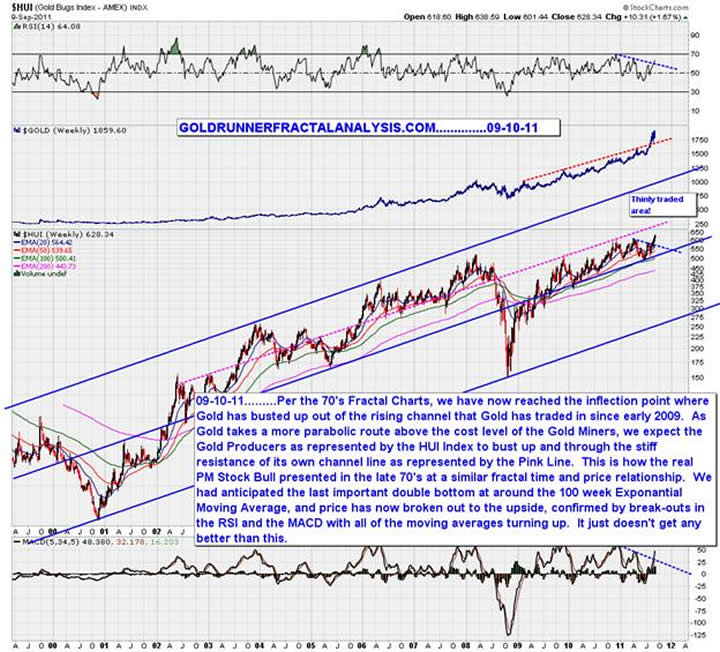 REVIEW OF OUR EXPECATIONS TO DATE

1)    A major bottom for the PM stock indices is now firmly in place based on the fractal relationship to 1979.

2)    Price and the technical indicator readings continue to track the 1970’s PM stocks up into new highs with much higher prices to go. In fact, we expect this run to be the first, and smallest, of 3 momentum runs to come for the PM stock indices. The mid-900s appear to be a realistic target for the HUI Index into year-end, or into early 2012.

3)    A break-out to new highs with a successful re-test now appears to be in place for the PM stock indices.  We have reached the point in the cycle where leverage returns to the PM stocks with a vengeance exactly like the late 1970s charts.

4)    Our expectation that a “high level consolidation” for Gold is enough to start the early momentum break-out and run for the PM stock indices at this point appears to be on target.  That expectation was based upon the fact that the price of Gold is now much higher than the cost of production for the Gold producers and higher than the price of Gold that caused an increase in the earnings for the last quarter since the PM stock indices are dominated by large cap gold producers.

5)    Gold moving to a new high early this week negates the probability of new lows for this correction but fuels massive volatility in price as many try to see a “double top” based on the past metrics of the current Gold bull.  The metrics for Gold’s historic bull market have now changed, and expectations for a double top will likely morph into what will eventually be seen as one of the biggest momentum runs for Gold in history that mimics the 70’s Gold charts.

6)    The fundamentals for Gold are off the charts on a world-wide basis at this time, yet many focus on the past metrics of this current Gold bull to fear a sharp drop in Gold.  They will continue to worry all the way up, and will be surprised by the rise in the price of Gold that leaves the past metrics in the dust as most nations ramp up the printing presses to stave off dismal economies.

7)    The only true reflection of the degree of dollar devaluation at hand is seen in the Gold chart as the US Dollar is massively devalued against Gold.  The Dollar Index will generally drift lower like the late 1970s since it is a pricing scheme where the US Dollar is “priced” against a basket of other paper currencies that are also being aggressively devalued.  As the dollar is continually devalued so is everything else that you own that is denominated in dollars.  We believe that the best way to protect yourself and the buying power of your savings is via PM investments of all kinds- owning Gold, Silver, and the PM stocks.

8)    The big funds who have been long Gold and short the PM stocks need great volatility in the Gold price at this time to try to reverse that trade if Gold is not going to trade lower.  The short covering in the large cap Gold stocks pushes the PM stock indices up to new highs as Gold consolidates.  We suspect that another sharp move higher in Gold is on our door step- one that will accelerate the Gold and Silver stock short-covering, driving the PM stock indices higher in a momentum run as shorts are forced to cover into higher prices.

9)    Silver will lag Gold to some extent in this time-frame since we have already seen the analogous first parabolic leg up in Silver.  Nevertheless, we expect to see Silver run back to new highs in a similar multiple topping process as we have shown in the fractal charts for Silver in 1979 and in 2006.  Thus, we retain the $52 to $56 price objectives for Silver in that multiple topping process with the potential for Silver to spike up into the low 60s.

10) It just doesn’t get any better than this since it appears that we have finally reached the early part of the “cycle sweet spot” for investing in the PM stocks per the 70’s Charts.  As we have noted, we expect the large cap Gold producers to out-perform along with the mid-tier producers and near-producers.  The usual sub-sector rotations will eventually begin as we saw back in the fractal period 2002.

11) The large cap Gold stocks and the producing, or near-producing, mid-tier Gold stocks, should lead the way for this momentum leg higher.  Silver should run up to new highs to fulfill our earlier expectations per the 2006 secondary fractal Silver Chart.  $52 to $56 should be achievable for silver, with $58 to $62 as real possibilities.

12) There is a good possibility that we will need to raise our targets for Gold for this momentum run but we will wait to see how the next run upward in Gold to the expected $2250 level plays out to see the price structure in comparison to the 1970s.  $3,000 Gold, or higher, might be in play for this run depending on how the price of Gold moves over the next month, or so.

13) Big money is coming into the large cap PM stocks as seen by “volume leading price.”  This is very different from what we have mostly seen to date in this PM stock bull – all except for a few momentum runs over the last decade.

100 of the 150 analysts who have gone public in maintaining that gold will eventually go to a parabolic peak price of at least $2,500/ozt.+ before the bubble bursts believe that gold will reach at least $5,000 per ozt. Take a look here at who is projecting what, by when. Words: 970

The majority of analysts are now of the opinion that gold will reach a parabolic peak price somewhere in excess of $5,000 per troy ounce in the next few years. Given the fact that the historical movement of silver is 90 – 95% correlated with that of gold suggests that a much higher price for silver can also be anticipated. Couple that with the fact that silver is currently greatly undervalued relative to its average long-term historical relationship with gold and silver could escalate dramatically in price over the next few years. How much? This article takes a look at historical gold:silver ratios and what attaining certain relationships would mean for the price of silver should specific price levels for gold be realized. Words: 1411

With gold miners, in general, so attractively valued relative to the gold bullion price, the question becomes which stocks are the most compelling and have the best leverage to robust precious metals prices…In order to find the diamonds in the rough, I use what I call “The Five M’s” for mining stocks… Market cap, Management, Money, Minerals and Mine life cycle. [Let me explain each .] Words: 1146