Gold: Wait for Signs of Stabilization Before Buying In – Here’s Why

Lorimer Wilson April 30, 2013 Comments Off on Gold: Wait for Signs of Stabilization Before Buying In – Here’s Why 2,468 Views

We are seeing signs of a bottom…in gold…but…

prudence calls for waiting for some signs of stabilization before getting long. I would rather miss the first 10-20% move than lose another 50% should I get long prematurely. [Let me show you some charts that illustrate my caution.] Words: 288; Charts: 6

So says Cam Hui (http://humblestudentofthemarkets.blogspot.ca) in edited excerpts from his original article* entitled Watching Silver for the Bottom in Gold.

This post is presented compliments of Lorimer Wilson, editor of www.munKNEE.com (Your Key to Making Money!), www.FinancialArticleSummariesToday.com (A site for sore eyes and inquisitive minds) and the FREE Intelligence Report newsletter (see sample here – register here) and may have been edited ([ ]), abridged (…) and/or reformatted (some sub-titles and bold/italics emphases) for the sake of clarity and brevity to ensure a fast and easy read. “Follow the munKNEE” daily posts via Twitter or Facebook. Submit your own articles & your article suggestions here (earn a “Hat Tip” acknowledgement) for posting consideration. This paragraph must be included in any article re-posting to avoid copyright infringement.

The chart of GLD is showing the classic signs of a capitulation bottom: 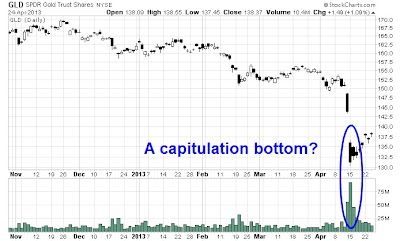 The same goes for GDX: 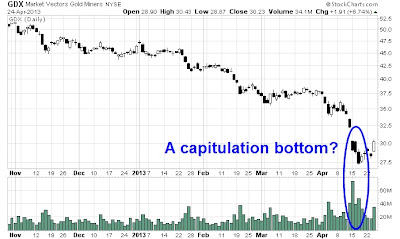 In the last couple of instances where gold had bottomed, the silver/gold ratio bottomed at about the same time. Here is the 2008 bottom:

The markets in 2011 and 2013 may not be directly comparable. 2001 was the end of a multi-decade secular gold bear market. Today, the price of gold peaked out in late 2012 and fell back below important technical levels after a long bull market.

We are likely seeing a short-term bottom for gold here. On the other hand, don’t be so sure about the intermediate term trend. There may be more downside to come…

Since the Financial Crisis erupted in 2007, the US Federal Reserve has engaged in dozens of interventions/ bailouts to try and prop up the financial system…and the amount of money printed is absolutely staggering. As a result of this, inflation hedges, particularly Gold, have been soaring…[but] for gold, for example, to hit a new all time high adjusted for inflation, it would have to clear at least $2,193 per ounce. If you go by 1970 dollars (when gold started its last bull market) it would have to hit $4,666 per ounce. Words: 581

We now have a really strong probability that the correction which started at $1913 on 23 August 2011 has been completed both in terms of Elliott waves and also in terms of time elapsed. If this is correct, the gold price should soon be expressing itself in violent upside action as it moves into the third of third wave which is still targeted to reach $4,500. [Let me explain in detail (with charts) how and why my most recent analyses confirm my earlier target of $4,500.] Words: 1085

The closing of the gold window back in August 1971 has led governments worldwide to create endless amounts of worthless paper money and the resulting credit bubble has created a world debt exposure of over US$ 1 quadrillion (including derivatives). It has also created perceived wealth for big parts of the world’s population – a wealth which is only backed by promises to pay and by   grossly inflated assets. Few people realise that this wealth is totally illusory and will implode considerably faster than the time it took to create it.  [Let me explain.] Words: 890

My Fractal Gold chart work is a direct comparison of Gold, today, to the late 70’s Gold Parabola.  Thus, “timing” is taken directly from the late 70’s cycle, with price targets created from a combination of the late 70’s Gold price and different technical analysis techniques.  We developed a price target back in 2006/ 2007 for Gold to reach the $10,000 to $12,000 range during this Gold Bull and we still stand by that forecast. Let me explain where we are at this point in time.

9. The Future Price of Gold and the 2% Factor